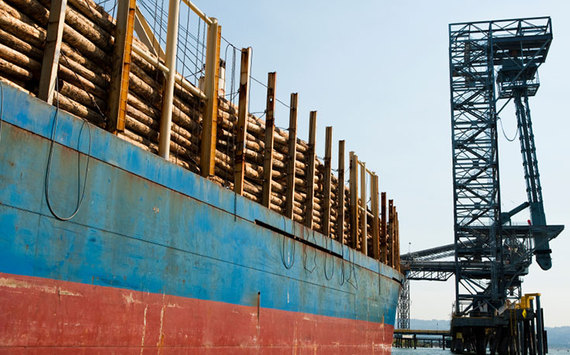 Imagine you joined the crew of a cargo ship, sailing down the Amazon River from Peru into the Atlantic Ocean. After officials in several countries deny your ship entry suspecting your cargo is illegal, you dock in a Mexican port. When told the ship can't leave unless you and your crew are paid your wages, the shipping company declares bankruptcy, puts the ship up for sale, stranding you on the ship more than 2,000 miles from home with little food or water. Sounds like something out of Hollywood, right? For the crew hired by the Peruvian company Yacu Taski, this story is all too real.

For years, a ship named the Yacu Kallpa has regularly brought shipments of timber from Iquitos, the heart of the Peruvian Amazon, to Houston, Texas, with other stops along the way. A July shipment brought by the boat was featured in an Al Jazeera investigative report, which tracked timber from Peru to the U.S. to show how fraudulent paperwork and secretive corporate structures facilitate the international illegal timber trade. In September, U.S. Customs and Border Protection in Houston detained 71 shipping containers from the Yacu Kallpa, filled with allegedly illegally harvested Amazon timber weighing more than 3.8 million pounds, or enough to cover roughly three football fields. Noting they could not prove that the wood was legal under the Lacey Act, a law that prohibits the import of illegally-sourced timber, U.S. Customs denied entry to the timber, allowing the ship to leave.

Even after serious questions were raised about the legality of the ship's timber and one of its shipments wasn't allowed to enter the United States, the company continued to take on questionable cargo. As the Yacu Kallpa headed back to Peru for a new shipment, Peruvian authorities conducted an investigation into the legality of timber leaving port of Iquitos. Coordinating between Peruvian agencies and international organizations like Interpol and the World Customs Organization, authorities in Peru proved that the new shipment bound to leave on the Yacu Kallpa also contained illegally-sourced timber, with the most recent reports citing that 94 percent of the timber aboard had illegal origin.

Unfortunately, the Yacu Kallpa managed to leave the port of Iquitos, with the company arguing that it wasn't responsible for the timber's origin. Making its way down the Amazon River, the ship headed to Macapa, Brazil, where authorities confirmed illegal timber identified by Peruvian authorities was on board and briefly detained the ship for safety and sanitation non-compliances. Brazilian authorities noted that timber was not allowed to be offloaded in Brazil. After spending weeks navigating the Caribbean and making a weeks-long unscheduled stopover in Trinidad and Tobago, the ship headed to the Dominican Republic, where it was also denied entry by Dominican authorities working on information from Peru about the ship's illegal cargo.

Just days after the ship's cargo was denied entry in the Dominican Republic, the Peruvian government fired its top logging oversight official. Media in Peru noted that exporters opposed to tougher timber enforcement had swayed senior officials, leading them to terminate the oversight official without citing a cause. Months prior to the firing, timber industry-led protests dragged coffins through the streets of Iquitos with the names of Peruvian inspectors, including the now-fired logging oversight chief.

Meanwhile, knowing the ship could not offload any part of the shipment in Houston as it traditionally did, the Yacu Kallpa headed to Mexico. In the port of Tampico, Mexican authorities seized some of the 4,000 tons of timber, which they deemed illegal, based on evidence from Peruvian authorities. Further, Mexican authorities informed the company it would have to pay the crew wages they were owed and provide food before leaving the port, as required by Mexican law.

Instead of properly treating its workers and complying with the law, the company put the ship up for sale, asking $4 million, and is expected to declare bankruptcy. In abandoning the ship, the company also left its entire crew stranded with no way to return to Peru. The crew was stuck in Tampico for almost a month without pay and with little access to food and water. Finally, the Peruvian consulate in Mexico stepped in on behalf of its citizens, the stranded crew, and they returned home in late February.

The trade in illegal timber not only hurts tropical rainforests and the communities that depend on them, it threatens workers throughout the world. Shipping companies cutting corners to take part in the risky business of transporting illegal timber may also be cutting corners in their responsibility to their workers, like in the case of the Yacu Kallpa. It is critical that companies across the supply chain treat their workers fairly and take steps to ensure their products are legally sourced. In the case of the Yacu Kallpa, the company must be held accountable for risking the health and safety of its workers, as well as its role in transporting illegal timber.