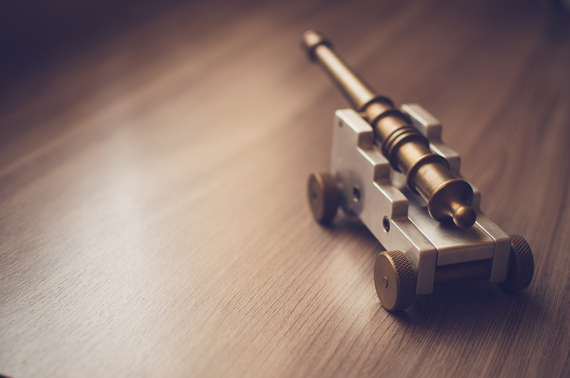 Technology brings people together in many ways - from the invention of the telephone and air transportation to today's social media. However, it also drives human relations into unchartered, and often dangerous, territory. Technological progress, especially in the military space, has been dangerously accompanied by a grave reality: human beings have limited capacity to internalize the consequences of actions perpetrated from a distance. Just over 70 years ago, in the Second World War, two atomic bombs were dropped in Japan. Every day, similar smaller-scale decisions are made by leaders and militants from different sides of conflicts. Although in some cases perpetrators would likely commit their actions anyhow, the majority consciously or unconsciously relies on the fragile link of "compassion-at-a-distance" to push the button. Without being able to see, hear, smell the results of one's decisions, the connection between action and effect is lost. Our ability to feel sympathy and to connect with the suffering of others decreases exponentially with distance. The fascinating Trolley Problem, elaborated in the 1970s by British philosopher Phillipa Foot, lays out this ethical-evolutionist issue. A trolley is out of control. On its way, five people are tied up to the tracks. Fortunately, it is possible to pull a lever that diverts the trolley to another track. However, one person is tied up to that second track. Would you pull the lever? Here, over 90% of people say they would; in other words, that it would be considered ethical, or even desirable, to lose one life to save five. But then a new variant is added. Like before, a runaway trolley comes barreling down the tracks. This time, however, there is no lever to be pulled. Instead, an obese man is standing in front of you on the bridge under which the trolley will pass. The only way to avoid collision with the five people is to push him off the bridge, onto the track before the trolley. Here, the result is the opposite: over 90% say they would not push the man. The more separated we are from the consequences of our acts, the less responsible we feel for them. In this case, despite the fact that rationally most people agree that all things equal it would be ethical to waste a life to save five, they would only actually do it through an "isolation" tool, the lever. The thought of pushing a person to his death, feeling the resistance of his body, seeing the terror in his eyes, listening to his screams, prevents most people from taking action, regardless of what happens to the other five people (which in this context became more "distant"). Our species evolved as a social animal, interacting in small groups, based on immediate relationships. This is how we have survived through dozens of thousands of years, cooperating with each other and dealing with external threats in small tribes and communities. During most of our existence, we killed using our hands, or rudimentary tools, one by one. For each action, a proportional reaction. The burden of killing was having to deal with the image of your victim, in your dreams, in your reality. It wasn't until very recently that we started to interact in larger groups, under a global system, divided among nations and ideologies. Add to the equation the new military technologies and we have a problem. As former secretary of defense Robert McNamara admitted in the documentary The Fog of War, in the modern world, decisions that claim the lives of thousands of people are often made in a cold and distanced fashion, in such way that no one loses sleep over them. In this "dynamic of collectives" - allies vs axis, communists vs capitalists, east vs west, rich vs poor - individuality, compassion and humanity are at a loss. The pilot who flew the plane that dropped the atomic bomb in Nagasaki admitted that, although he obviously knew what the mission was, he had no real grasp of the horrific consequences of his act. In some way, he simply pressed the button that ended the war. He killed thousands of civilians from the heights of his plane, while he would probably never have considered killing one civilian with his own hands. As Stalin put it, "one death is a tragedy; a million deaths are a statistic". Modern arms, such as drones and other video-game-like weaponry, further contribute to the problem. Ultimately, the future of humanity depends on our ability to develop some kind of "collective compassion", which matches modern world dynamics and technology.