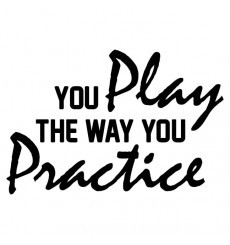 One of the first questions that I ask athletes and coaches I work with is: Should you compete like you train or train like you compete? By far, the most frequent response is: You should compete like you train. This answer seems perfectly reasonable if you think about it. When you train, you're relaxed, feel no pressure, and are only focused on performing your best. Why wouldn't you want to do that in a competition?

And, in an ideal world, I would agree. But we don't live (or compete) in an ideal world. The reality is that there is one huge difference between training and competitions: Competitions matters! How well you perform in training, for example, whether you win, in training doesn't matter. And the fact that competitions matters brings with it all sorts of baggage related to expectations, focusing on results, comparing yourself with other athletes, and fear of failure. That's why so many athletes train much better than they compete. And, as we all know, one of the great challenges for athletes is translating their training performances into competitive results. This barrier is also one of the top-3 reasons why athletes come to me for help.

So, my initial reaction to the seemingly obvious answer that you should compete like you train is that you can't... unless. What's the unless? Unless you train like you compete!

As I've noted in a previous post, one of your most significant goals on when you compete is to be as prepared as you can be to perform your best. Think about everything you do to get prepared for a competition:

Now, let me introduce you to two essential rules for sports success that makes it an absolute requirement for you to train like you compete so you can compete like you train.

First, whatever you do in competitions, you must first do in training. This too seems obvious, yet is often neglected by athletes. Have you ever tried something new on the day of a competition that you've never done in training? Hopefully not, but if you had, it probably didn't work very well for you because if you haven't practiced it in training, there's no way that it will work in a competition. If you want to perform technically and tactically well in competitions, you better get that technique and those tactics down in training first. The same holds true for every other aspect of your competitive preparations, whether physical or mental readiness.

Second, whatever you do in training is what you will do in a competition. Ideally, the purpose of training is to develop effective skills and habits that will translate into great performances in competitions. But here's the problem: athletes often practice bad skills and habits in training. For example, if you practice bad technique in training (not intentionally, of course), that's what you become good at (you get good at being bad!) and that's what comes out in the competition.

Whether you practice good or bad skills and habits doesn't just apply to technique and tactics. It has a huge impact on your mental preparation as well. Here's a common example that drives me absolutely crazy when I work with athletes. As I described above, on the day of a competition, you go to elaborate lengths to prepare for your competitive performances. Yet, in training, I see athletes sitting around and chatting it up with their teammates right up until they begin practicing and during breaks in training as well. What these athletes are doing is developing the skills and habits of performing at about 70 percent focus and intensity. So, in competitions, what happens? Either they compete at 70 percent focus and intensity or they try to kick it up to 100 percent focus and intensity, but their mind and body explode because they're not used to performing at that level of focus and intensity.

So think about what you do in competitions to get ready and do the same things in training. For example, do a good physical warm-up, review your tactics, get your body moving, and do mental imagery. Of course, you don't have to go through a lengthy routine, but you should shrink it down to a 1-2 minute version of your pre-competitive routine.