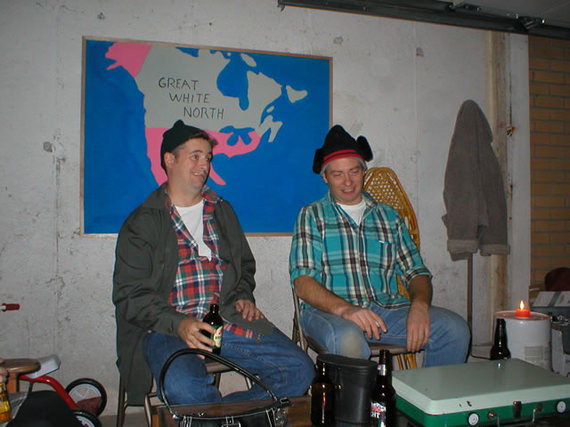 In the Bronze Age, before Twitter and speed dating and online match-ups, men and women met each other one of two ways: at church, or via the newspaper classifieds.

Trust me: It was a thing. The first order of business for unattached urban singles on a Saturday morning was pouring their first coffee and scouring the hook-up possibilities spread across as many as four pages of print.

My friend and I, in our 30s and single, were languishing in the big city, despairing of ever finding our true soul mates. We had been serial dating seemingly forever, and between us had been too long familiar with the world of blind dates, set-ups by friends, and New Year's Eves spent with the well-worn triumvirate of ABC's Rockin' Eve, Mister Salty Pretzel Twists and Sara Lee Banana Cake.

Fed up and lonely, yet ever hopeful, we decided to place an ad of our own, asking for exactly what we had failed to find out there. To wit, a guy who picked up a cheque once in a while and actually liked women.

"We'll do it for a lark," my friend said airily, gnawing on her remaining cuticles.

Constructing the perfect posting took us the better part of six months. It shouldn't be frivolous, we agreed, yet we didn't want to come across as string theory experts. In a scant 30 words our ad had to weed out narcissists, health fanatics, married men, axe murderers, and any man who still lived with his mother.

The final draft read something like this: "Do you prefer Gloria Steinem to Vanna White? Movie matinees and Raisinettes to the Triathlon and Weetabix? Moonlighting to The A Team? Write and tell us about yourselves."

We ran the ad on two consecutive Saturdays. Over coffee we stacked the voluminous replies into two piles: the troubling ones and the seriously troubling ones. One respondent revealed he'd been clinically depressed since the love of his life took up with his best friend the year before, but as he put it, maybe two "wildcats" like us could lift him out of it. A sporting duo wrote to say they needed able-bodied crew for a sailing expedition to Alaska. Were we each willing to chip in $4500 to help defray expenses? One sorry lad said he'd given up on women but was considering entering the fray again because, as he explained, "Any human contact, I suppose, is worthwhile."

Out of 36 responses the only passable one (read: not overtly hostile or passive aggressive) came from two men, friends who lived north of the city. We had visions of weekends in the country, roaring fireplaces and romantic trysts. The ending of their letter particularly piqued our interest:

"Call us. You won't be disappointed."

We braced ourselves and phoned them, agreeing to hang up immediately if they were monosyllabic, defensive, or stoned. After a reasonably pleasant conversation we agreed to meet them for coffee the following Saturday in the city's downtown.

"How will we recognize you?" I asked buoyantly.

"We'll be wearing toques," one piped up. Their choice of headgear left us a titch concerned but by then it was damn the torpedoes. My friend and I later agreed if they'd said matching toques, the gig would have been up.

We heard our dates before we saw them. I never realized how much noise two snowmobile suits can make in a quiet bistro. They introduced themselves, sat down across from us, and began fiddling with their toques.

They both appeared to be suffering from heat prostration. I suggested breezily that they remove their outerwear, realizing we'd need another entire booth to store them.

"No, ladies, I like to keep the goods under wraps," Wayne declared.

Brad, whose toque read Ghostbusters, took the floor next, saying he worked nights and enjoyed having his days free.

His buddy Wayne turned on him. "What do ya mean, ya slug? Ya sleep all day." He looked at us in utter disgust.

"The guy has to set his alarm to get up for supper."

"Keep it up, old man," said Brad, feathers clearly ruffled. "And I'll tell them you're 45 and still live with your mom." He winked at us. "He does, you know."

Wayne instantly changed gears. "So this is the big city. It's not so great."

"No way," said Brad emphatically. "We were just down here last year for the Rush concert." At that point they rose off their seats, high-fived one another and let out deafening howls.

Thirty minutes into the date and the toques were still on their heads. Wayne was busy building an elaborate pyramid out of plastic dairy creamers. Brad had just asked our waitress if she was free later.

Their snowmobile suits seemed to be emanating their very own atmosphere. Like an aura, if an aura was composed of inexpensive man-made materials.

Brad and Wayne started arguing over the cheque next. My friend grabbed it and said, "This one's on us." Anything to stop the bleeding.

As we paid the bill, we heard their outfits approach from behind.

"So what's going on in this burg?" snarled Brad. "Any hot spots?"

"You bet," I said, calculating how much time I had until the start of Saturday Night Live.

"It's called The Duke of Donuts. I recommend the Boston Cream.

"You won't be disappointed."