Many Twitter users -- including comedian Rob Delaney, who is known to often hassle Romney on Twitter -- pointed to the unfortunate search results Wednesday:

Ha! Do a Google image search of the term "completely wrong"

The "completely wrong" search is a result of Romney's own statement on his now-infamous "47 percent" remarks.

"Well, clearly in a campaign, with hundreds if not thousands of speeches and question-and-answer sessions, now and then you're going to say something that doesn't come out right," Romney said. "In this case, I said something that's just completely wrong."

A Google spokesman confirmed to Slate that the search results are not intentional.

Below, an example of the "completely wrong" Google Image search results: 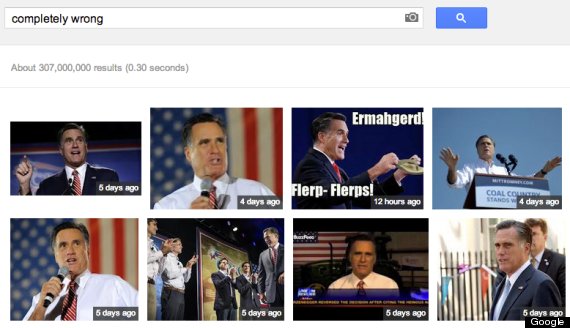 CORRECTION: This story originally stated Twitter users pointed to the Google search on Thursday. It's been corrected to reflect that took place on Wednesday.