I am a first-year associate at a large law firm in New York. By all accounts I am Going Places and will Be Something someday, but for now it's a lot of "skill building" like managing nitty-gritty tasks and doing document review ... I can manage my eating pretty well during the day, but at night I return home unsatisfied, and a binge results. I... see the direct connection between this emptiness and my eating habits. And I do just need to stare my frustration with my job and my career in the face instead of distracting myself from it with food. I just don't know how.

-Letter quoted in "Women, Food and God" by Geneen Roth

When I interviewed Geneen Roth a few weeks ago, I planned to quote her in a quick news item on a new study out of Finland showing that women experiencing burnout at work are more prone to compulsive eating and less likely to overcome it. Simple enough. Yet I put off writing it up. I knew the reason: research all the way from Scandanavia hit too close to home.

Published in the April 2012 issue of the American Journal of Clinical Nutrition, the study looked at the relationship between work burnout and emotional eating -- eating when you feel bad -- or "uncontrolled eating," eating where a person feels unable to stop. The researchers defined burnout as a combination of exhaustion, cynicism, the feeling that your work is meaningless, "lost occupational self-respect caused by chronic work stress," according to the study.

The findings immediately reminded me of the passage above from Geneen Roth's "Women, Food and God" and the reaction I had when I encountered it for the first time.

I know Roth's work because it's been so useful to me in my own struggles to do something very simple: eat when I'm hungry, stop when I'm full. I used to berate myself for not being able to follow those simple instructions until I realized that while not every woman can relate to my bout with anorexia, the near constant thinking about food and weight is the norm for many.

In the quest to resolve my own standoff with food, news reports on the latest research around food and eating usually aren't that helpful. They are often clinical, reporting the science, with perhaps some obvious advice tacked on the end - if I read one more time that smaller, more frequent meals is the answer to years of struggling with food, I'm not sure what I'll do - and sometimes they are even shaming. (This one on a study of women's "sneaky" secret eating habits -- conducted by that lauded research institution, the American Pistachio Growers, no less -- is a beaut.)

When I read the lawyer's account in "Women, Food and God" in 2010, I thought, Why aren't we talking more about this? And then the Finnish study this spring raised that question all over again.

We know that working in an office isn't great for the body -- sitting all day has been linked to greater risk of dying from heart disease and developing metabolic syndrome, a condition that precedes diabetes, and office work in general has been connected to impaired memory, back pain and absorbing a number of toxins.

But I hadn't read much on how a woman's relationship with food impacts and is affected by her career. The study invited a deeper look into that.

I called Roth to ask how she interpreted the research. Actually, I called and blurted out, "Can this be your next book?"

Deflecting the question very politely, Roth said that the running monologue in the minds of women who overeat at work -- or anywhere: "I'm afraid to feel what I'm feeling, so I'll tamp myself down and eat." The problem, she said, is that "most of us don't know don't know how to feel our feelings. We're afraid of them. Usually we think we're going to fall apart if we allow ourselves to feel."

And what is it that women are so afraid of feeling in the office? In the case of a young lawyer whose letter Roth quoted in "Women, Food and God," it was stagnation, thwarted ambition, and a sense of being stuck in a situation she couldn't control. "She didn't like where she was," Roth told The Huffington Post. "She wanted to change the situation, but she felt like she couldn't, so she was turning to food." The lawyer's story is a single anecdote, but a recent study by Accenture found that 31 percent of working women born after 1979 feel their career path is stagnant, and 47 percent feel they have a lack of opportunities that is holding them back. How many of those women are turning to food when they feel stuck, undervalued or overworked?

I asked Roth what advice she would offer the woman sitting at her desk, inhaling her food in front of her computer screen, knowing that she's full and somehow inexplicably keeps eating, and hating herself more and feeling less able to stop with each bite. How could that woman stop herself and find another way to cope?

She answered simply. "Don't eat at your desk." I couldn't figure out if she was speaking to me or readers or both.

I smiled and explained to her that I work on the Internet. No one takes time out for lunch.

That's when I really got schooled.

"Eating at your desk is compulsive eating, basically," she said. "You don't have that much attention that you get to split it like that and give your best self to either one of the things you're doing."

If you happen to be doing, oh, 8 things at once? Forget it. "You miss the fullness signals, so you overeat. You miss the pleasure signals. You don't taste the food because your attention is somewhere else. It's lose-lose all around."

But what if it's the culture of your office to eat at your desk, I protested again, or feels like it is? What if there is not an extra second to spare in your day as it is?

Roth was ready for me. "Just because we live in an insane culture doesn't mean we have to be insane, too. Be the one who doesn't do it and see what happens. If one person stops, then people will look at you and say wow, she's not doing that. Someone has to be the one who says, 'I'm not going to do it this way. I deserve more.'"

And now I felt that she was speaking directly to me.

I didn't succeed in coaxing Roth to write a book about women and work, and I didn't report the study in a timely fashion.

Instead, for weeks, I've wandered around with that sentence in my head, "Just because we live in an insane culture doesn't mean we have to be insane, too."

Roth translated the study into a very clear call to action. "Don't eat at your desk -- even if everyone else does."

This week, we're taking her up on it. With Arianna's encouragement, our staff is refusing to eat at our desks this week, and we hope you'll do the same. We challenge ourselves and you to eat your lunch without looking at any screens. At least one day, you must leave your office. Order what you really want. Eat slowly, make an effort to taste your food. Think about how long it's been since you've done that.

Then, to prove that you made the effort, send us a photo of you with your lunch, without your computer or phone. We'll post it in the slideshow below.

PHOTOS: Proof We Didn't Eat At Our Desks

PHOTO GALLERY
5 Days Of Not Eating At Our Desks
Download
Calling all HuffPost superfans!
Sign up for membership to become a founding member and help shape HuffPost's next chapter
Join HuffPost

Compulsive Eating At Work: How To Stop Eating At Your Desk
5 Days Of Not Eating At Our Desks 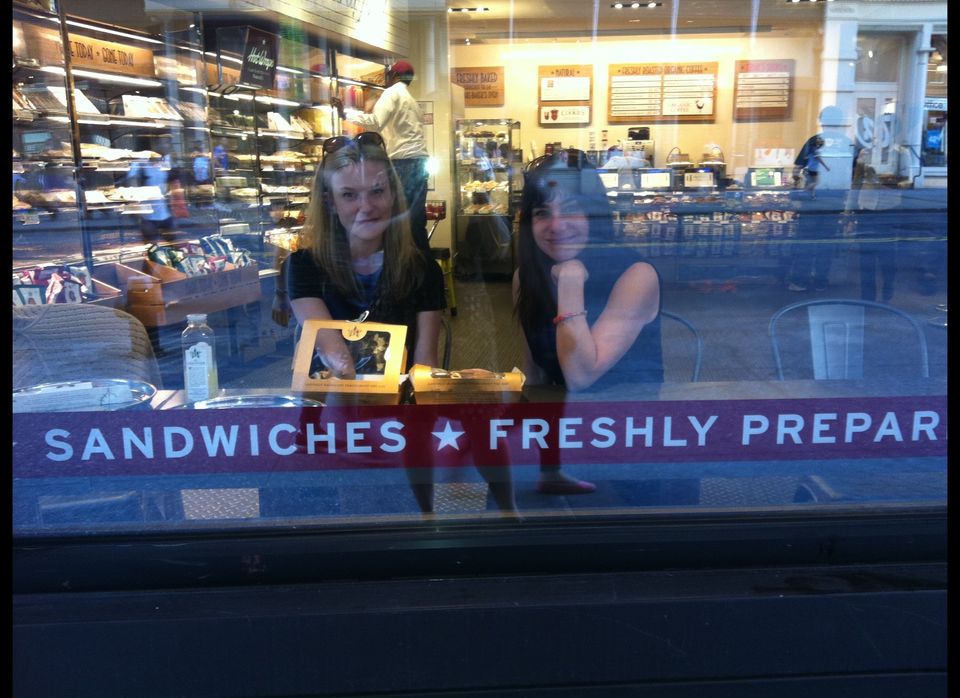 1 / 8
Monday - Lori L, Farah And Margaret
"For our first attempt, we ventured around the corner to a place where we often get lunch to go. This time we sat and actually talked (mostly about movies we'd seen over the weekend). Just taking a break in the middle of the workday made me feel less like I am my to-do list. I realized that most days when I walk into the office, I leave myself at the door. It also felt so civilized. I think lunch breaks must be part of the reason the French seem to enjoy everything more." -Margaret Wheeler Johnson, Women's Editor