Judging another's personality seems like one of the most uniquely human of skills. Machines can't tell whether someone is kind, or creative, or convivial, right? Well, new research shows that a simple algorithm adding up your Facebook Likes can actually assess your soul better than your soulmate can. It may even beat you at predicting your own behavior. If you're concerned about privacy (or Skynet), your ears should perk up.

For the new paper, researchers collected information on 86,220 participants, including the Facebook profiles of 70,520. Subjects completed a 100-item personality test, on which they rated their openness to experience, conscientiousness (self-discipline), extraversion, agreeableness, and neuroticism. Many also asked a friend or two to rate their personality using a 10-item version. For computer-based assessments, a program collected all of the Likes that users had given products, bands, teams, websites, and other stuff on Facebook. Analyzing a subsample of participants, the software associated certain Likes with certain traits, and used these associations to predict the traits of target participants based on their Likes. Michal Kosinski of Stanford University and Wu Youyou and David Stillwell of the University of Cambridge published their results online today in Proceedings of the National Academy of Sciences (PNAS).

Kosinski, Stillwell, and Thore Graepel had previously reported in PNAS that, using Facebook Likes, software could predict personality and other characteristics such as drug use and sexual orientation better than chance. But how would a computer do against a real live judge who eats, sleeps, and fights with you? In this new study, the average correlation between self-ratings and friend ratings was 0.49. (Chance would be close to zero.) The correlation between self-ratings and computer ratings was 0.56. The computer won. According to Kosinski, it turns out that "computers can beat us at 'our' game."

The researchers then compared their results to a meta-analysis of personality judgment conducted by Brian Connelly and Deniz Ones. In that paper, the accuracy of work colleagues was 0.27. The computer in this study could beat that by looking at just 10 of a participant's Likes selected at random. The accuracy of friends and roommates were each at 0.45, which the computer could beat by looking at 70 Likes. Family members were at 0.50 (150 Likes), and spouses were at 0.58 (300 Likes). Participants had, on average, 227 Likes, allowing the algorithm to read them, on average, about as well as their life partners. 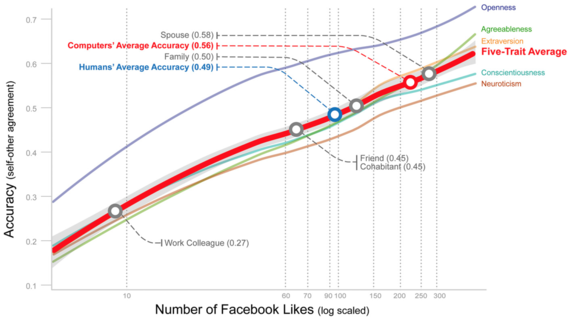 Next, they asked whether computer judgments of personality could predict actual behavior. Using additional surveys, plus information gleaned from Facebook profiles (e.g., number of friends), they measured 13 life outcomes of participants. Computer-rated personality correlated with four of these outcomes even better than did self-rated personality: substance use, field of study, number of Facebook friends, and Facebook activities (number of posts, etc.). It equaled self-ratings in predicting political attitudes and social network characteristics (density, etc.). It was less accurate with life satisfaction, depression, self-monitoring, impulsivity, values, sensational interests, and physical health. However, in all but one case (life satisfaction), computer ratings of personality correlated more strongly than did friend ratings. If the computer had been trained to predict life outcomes rather than personality, it probably could have performed even better.

The ability to judge personality based on a few Facebook Likes makes sense when you look at which Likes best correlate with certain traits. "For example," the authors write, "participants with high openness to experience tend to like Salvador Dalí, meditation, or TED talks; participants with high extraversion tend to like partying, Snookie (reality show star), or dancing." Computers also have certain advantages over humans, the researchers point out: They can amass and sift through huge amounts of data related to a specific task, and they're not burdened by motivational biases (you might really want to see your friend as nice, for instance).

"Automated, accurate, and cheap personality assessment tools could affect society in many ways," the researchers write. Notably, they could benefit marketers, recruiters, and psychologists.

"Furthermore," they write, "in the future, people might abandon their own psychological judgments and rely on computers when making important life decisions, such as choosing activities, career paths, or even romantic partners." So in deciding whether to become a doctor, someone might see how people with similar Facebook profiles enjoy doctoring, instead of relying on introspection? "Exactly!" Kosinski says. "Take an average young girl, for example, who is embedded in a culture where girls tend to be nurses and teachers but not politicians or engineers. She may simply lack the ability to imagine herself as an engineer." A machine would bypass her biases.

The notion of a computer that just gets you is comforting, though some might find it creepy. The researchers reference the movie Her, in which the protagonist falls in love with his smooth-talking OS. There's not a lot your personal computer can do today with knowledge of your personality profile, but nuances of behavior and interaction will become central in natural-language and immersive interfaces. Are you sighing because you want help, or because you want your digital assistant to leave you alone? We shouldn't have to struggle to understand computers when we can program them to understand us.

Automated character assessment also raises the specter of manipulation, however. People might become wary of expressing themselves online knowing a government or corporation could scrape that information and predict their every move. "Two principles should guide us," Kosinski says: "transparency and control." Users should know what personal information is out there, and be able to decide how it's used. "Predicting personality, like any other technology, is morally neutral," Kosinski says. "We can use it to improve life or to harm ourselves -- just like a knife." A knife that knows all your soft spots.