America has always admired a good confidence artist, that sleek and clever shyster whose fancy words promise a golden future. He is the bad-boy cousin of the self-made men, and a direct descendent of mythic anti-heroes like cowboys or noir detectives, who exploit the ragged edges of the modern world. We like him because he's smart and because he's not constrained by any of the giant institutions or corporations that make individuals feel so powerless.

But the con man is more than that. In his own sly way, he has been a prime mover in American economic development, almost without anyone noticing. The con man is an innovator in the financial world, the one who susses out opportunities and opens up markets ahead of the slow-moving and hide-bound elite. You could even go farther, and say that American would never have prospered without imposture, swindling, and counterfeiting. Con men have advanced the nation credit against its own future legitimacy.

In the 19th century, for instance, the nation lacked a national currency. Regional banks issued their own banknotes but even so, currency was scarce, especially on the frontier. Counterfeiters stepped into the breach, and though everyone knew the money supply was diluted with fakes, they used the bills anyway because crooked money was better than none. Forgeries greased the engine of trade.

Later in the century, the trading of commodities futures on the Chicago Board of Trade ignited a fervor for speculation, but only the wealthy could afford the steep margin requirements to participate on the exchange. Bucket shops arose to sate the appetite. There, a clerk or farmer could place a side bet on the direction of a given stock without actually purchasing any shares. Little did they know the betting was almost always rigged against them. Bucket shop proprietors made the working class feel as if they were breaking into the rarefied realm of high finance, until the new century when they finally did.

In the early 20th century, the big con exploded onto the scene. An intricately designed piece of theater, the big con consisted of actors, extras, sets, costumes, and nine scripted acts. In its most common form, the swindler convinced his mark that he was the lucky recipient of insider information on the stock exchange. He would place ever-increasing orders for stocks on the assumption that he couldn't possibly lose. It was the perfect game for a roaring economy, a financial market that was beginning to open itself up to the middle class, and a system which had always thrived by tolerating a bit of fraud to add liquidity.

It doesn't take much to detect the legacy of these confidence men in today's economic landscape. We are still grappling with how to differentiate speculation from gambling, as you can see in the Volker Rule, or in Warren Buffet's testimony before the Financial Crisis Inquiry Committee ("Gambling involves, in my view, the creation of a risk where no risk need be created"). One con man has come forward to explain how swindlers will be the ones to take the most advantage of Obama's new JOBS act. And Ponzi still lives among us; since Bernie Madoff's expose, the Securities and Exchange Commission has prosecuted over 200 people for ponzi schemes. Even the Amish have succumbed. Confidence men are not the outliers or the exceptions to American culture. They are its logical extension.

Amy Reading is the author of The Mark Inside: A Perfect Swindle, a Cunning Revenge, and a Small History of the Big Con [Knopf, $26.95] 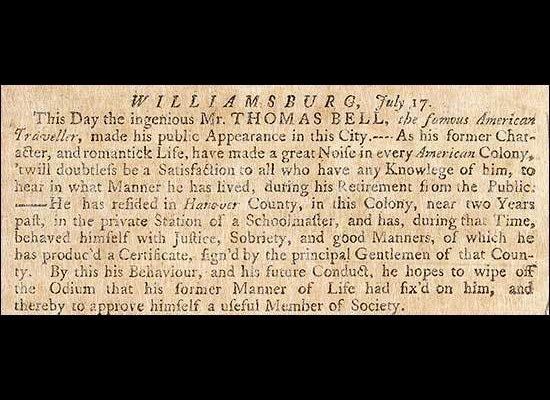 1 / 12
Tom Bell
The most notorious swindler of the American colonies was Tom Bell, an imposter who passed as a gentleman in order to gain entry into wealthy homes, borrow money from his new friends, and then make off with their valuables, including the clothes needed for his next imposture. From 1738 to 1755, he roamed from New Hampshire to Barbados, stealing, getting caught, and repeating the cycle. He was successful at deception despite his increasing fame--newspapers called him the "famous infamous Tom Bell." In 1752, he settled down in Hanover County, Virginia, and proclaimed himself reformed. He advertised himself as a schoolteacher and collected advance subscriptions for his memoir--which he never delivered.
Knopf