You can almost hear him thinking out loud.

Good Conan: "I'll do a Web show. I'll be the first big TV star to bring audience to a web series!"

Bad Conan: "Man, Jay couldn't even get his audience to shift a few hours, I'm not hip enough or young enough to get the 20 somethings to find me on the web." 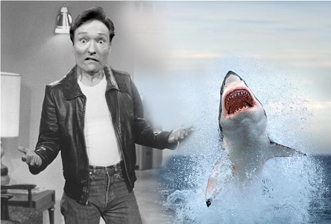 Conan - you blew it.

Now, don't get me wrong, it's early days for sure, and the tech foul-ups and the two naked guys on stage were a reminder that the streamies aren't ready for prime time, but heck, who watches prime time in real time any more?

Conan, the last time I checked, NBC had paid you a ton of money to stay on the beach. So either you've been able to pocket 40 million dollars and get back on TV, or you're walking away from a small fortune.

But TBS? Really? Here's where you've gone wrong: cable is great - awesome, in fact - but it is going to be far harder to get folks to find you on TBS, and then Tivo you when they're not going to watch in real time.

So, here's my virtual debate.

TV Squad says it's a good thing, here's why:

1. Conan will own the show. TBS had no problem letting Conan own his show and just paying him a licensing fee to air it.

2. He doesn't need to beg affiliates to carry the show at 11PM. The affiliate issue was going to be a problem with Fox.

3. There's no pressure at TBS. Think about it: George Lopez has been doing his show mostly in obscurity for almost six months now, and TBS was standing behind him.

4. TBS will promote the hell out of the show during the baseball playoffs. Since his show starts in November, TBS is going to take every opportunity to promote it during the division series and the ALCS.

1. The Demo - Dude!!! Conan's young audience is watching YouTube and Hulu - not cable. He's just aged himself out of the demo that he wants to reach.

2. Advertisers. Advertisers are hungry for the opportunity to do innovative campaigns with web content that is brand safe. Conan could have owned that market. Now, not so much.

4. History. He was the host of the Tonight Show on NBC. Then he wasn't. Now he's on cable - but he could have been the first crossover star on the web. Bummer.

Oh Coco -what have you done?