Conan O'Brien has been rebuilding his career brick by brick since losing his "Tonight Show" gig to Jay Leno in January 2010.

As part of the festivities surrounding the San Diego Comic-Con, a local art gallery just down the street from the convention is featuring 60 specially selected works of art showcasing the talk show host, who is now on TBS, as his superhero alter ego, "The Flaming C."

One of those pieces is a statue of O'Brien made of nearly 30,000 Legos that is in the front window of the Michael J Wolf Fine Arts gallery.

The Lego labor of love stands six feet, four inches tall -- same as the real O'Brien -- and is the work of New York-based artist Nathan Sawaya, who was commissioned by O'Brien's production company, Team Coco.

It's not the first time Sawaya has immortalized O'Brien in the Lego medium.

"When his show debuted, I was commissioned to do a Lego sculpture of O'Brien in a suit," Sawaya told Huff Post Weird News. "They commissioned this one a little while back and I only had three weeks to do it."

Sawaya gave up a fulltime job as a corporate lawyer in order to click bricks together for a living, but it has paid off nicely. His work is exhibited in high-end galleries all over the world and he earns as much as six figures for some of his work.

He says the Flaming C piece is on the higher end of what he charges, but the real charge is the reaction he gets from fans.

"My work seems to attract people who don't ordinarily go to fine art galleries," Sawaya said with pride. "I had a family come to one place and the father said he has never been in an art gallery in his life, but he came because it was Legos."

PHOTO GALLERY
Conan O'Brien As You've Never Seen Him Before -- As A Lego Superhero
Download
Calling all HuffPost superfans!
Sign up for membership to become a founding member and help shape HuffPost's next chapter
Join HuffPost
Voting Made Easy
Register to vote and apply for an absentee ballot today
Register now 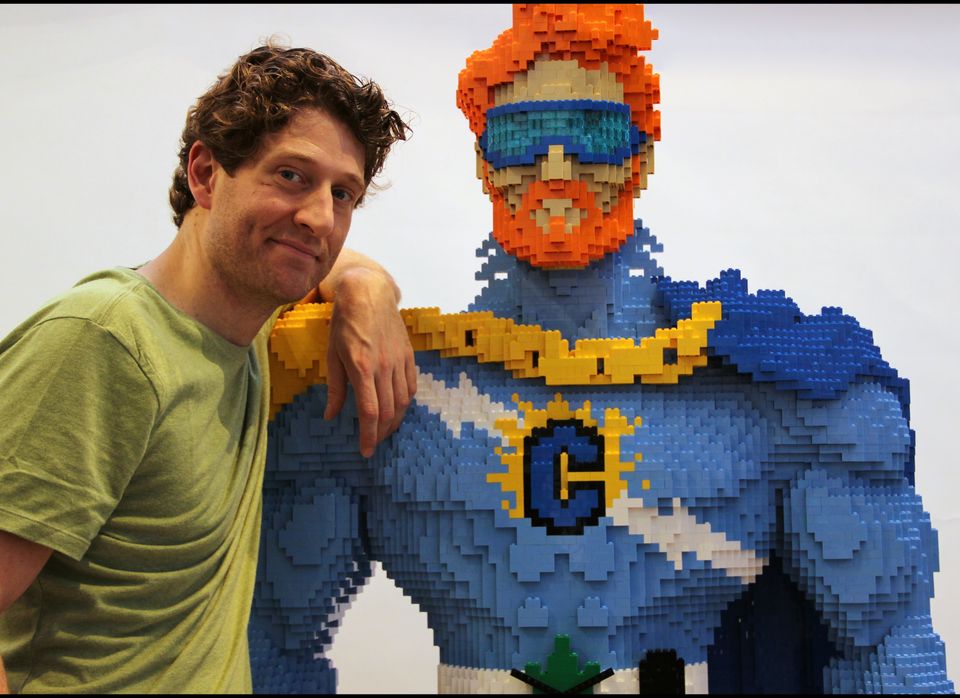 1 / 1
Conan O'Brien As You've Never Seen Him Before -- As A Lego Superhero
Nathan Sawaya is a professional Lego artist who was commissioned by Conan O'Brien to create a Lego sculpture of him as a superhero named "The Flaming C." Sawaya spent three weeks on the piece and estimates using 30,000 Lego bricks.
Courtesy of Nathan Sawaya