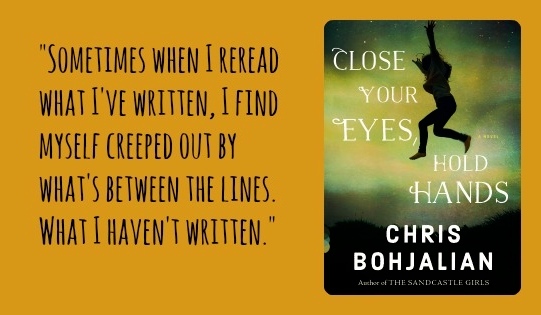 Some years ago - back in the Mesozoic era, if I'm not going to be coy--a review of my novel "Midwives" ended with the critic complimenting me on the candor and honesty with which I described what it must have been like for me to give birth. My name is androgynous and I was flattered. To this day, it's one of my favorite reviews of my work.

"Midwives," however, was only the first of a great many times I've chosen to write across gender. Three of the four narrators in "Secrets of Eden" were female, as were two of the four in "Trans-Sister Radio" (and three of the four would be by that novel's conclusion). I chose to make the Armenian American novelist who knows far too little of her own ancestry in "The Sandcastle Girls" a woman - and elements of that novel are profoundly autobiographical.

There are a variety of reasons why I write across gender, but the main one is that sometimes a woman is better suited to tell the particulars of a specific story. Other reasons? My male narrators, who often have a lot of me in them, are not especially likeable. (I wish I could say that was always by design. Alas, not.)

Still, I was unprepared for something my daughter, Grace Experience, said to me after she read the first draft of "Close Your Eyes, Hold Hands." She was nineteen years old at the time. "Dad," she began, "take this as a compliment--because I mean it that way. But I think your sweet spot as a novelist is seriously messed-up young women."

I had never thought of my work in that context, but when I contemplated my daughter's observation, I knew she was right. Some of my most interesting fiction is not merely narrated by a woman: It's narrated by a woman who is deeply scarred. It's from the vantage point of a woman who has experienced a horrific trauma. Women such as the young partisan in "The Light in the Ruins," Serafina Bettini, who has been physically and emotionally brutalized by the Second World War. Or Laurel Estabrook, who survives a violent sexual assault in "The Double Bind." Or poor, mute little Hatoun from "The Sandcastle Girls."

Now there is Emily Shepard in "Close Your Eyes, Hold Hands:" A sixteen-year-old homeless orphan, trying desperately to keep it together after a meltdown of a nuclear power plant in New England. She's a cutter, she pops Oxycontin tablets like M&M's, and she's an aspiring young poet obsessed with Emily Dickinson.

And while I knew who she was and how she sounded from the moment I started the novel, I depended on occasion on my daughter to find precisely the right words. She was a sophomore at NYU's Tisch School of the Arts at the time, and I would text her, asking for the perfect hipster speak synonyms for "hook-up" or "stoned." I wasn't sure whether I should be worried or proud, but instantly she would text back four or five words I just loved--including my favorite expression for rage: "bitchcakes." (Appropriately, Grace would narrate the novel for Random House Audiobooks.)

I have grown very protective of my Emily Shepard. I think the reason for this is clear: I am a dad of a daughter. There is no role in the world that matters to me more than being a father.

And so while some people presume that writers view their books as their children, we don't. We view our children as our children. Our books? When they are at their best, they offer a glimpse of our deepest fears and our greatest joys. They are about those subjects that will hold our interests for the year (or more) we are writing them. And in a book such as "Close Your Eyes, Hold Hands"--which I hope is among my best--there may also be a small hint of those things we will always care about most.

(The paperback of "Close Your Eyes, Hold Hands," went on sale this week.)