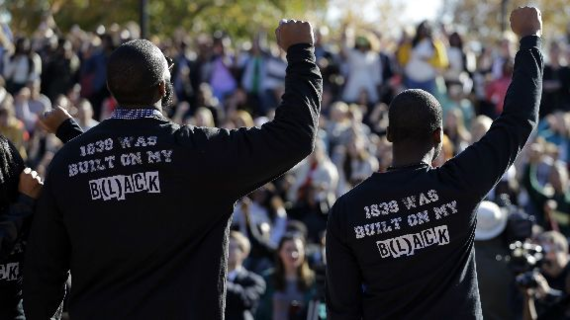 Within the last couple of weeks, the University of Missouri has become a focal point of intense public scrutiny and high racial tensions. Conflicts quickly escalated from drive-by racial slurs to anonymous mass murder threats, causing serious concern for the safety of black students and other students of color on campus.

Despite explicit threats of racialized violence, many faculty members remained unresponsive to the requests and needs of affected students. Student organizers, under the name Concerned Student 1-9-5-0, honed in on the unresponsiveness of the University President, Tim Wolfe.

In a public list of demands, they called for his resignation coupled with a public apology. After hundreds of students protested, University football players boycotted football activities with support of their coach, faculty threatened a walk-out in support of students and one student's hunger strike, President Wolfe resigned. Though one of Concerned Student 1-9-5-0's original seven demands was met through this resignation, a statement they released on twitter last night serves as a reminder that University of Missouri still has a long way to go.

Concerned Student 1-9-5-0 roots its' demands in shared governance and historical precedence. Their freshly released statement clearly links the 2015 demands to their point of origin, the 1969 list of demands curated by the Legion of Black Collegians. The demands, which they note are already in place at other nearby Universities, are as follows:

Concerned Student 1-9-5-0 implores the administration to move "Beyond mere tokenism, [they] expect to be integrated in the very decisions that affect [their] lives and educational outcomes on UM-System campuses." This imploration comes alongside a condemnation of what the group calls "negligence...[and] failure" on the part of the administration, culminating in the conclusion that black student "lives are NOT valued at this institution."

In this statement, Concerned Student 1-9-5-0 commits itself to continued advocacy for marginalized communities within their community at large. The reaction across the nation indicates exactly how large the community might be. Concerned Student 1-9-5-0's message has resonated with students from coast-to-coast, prompting them to make public declarations of solidarity. Students from Colleges and Universities including Yale, Georgetown, Vanderbilt, Oberlin, Southern Texas University, UC Berkeley and many more have sent affirmations and declarations of support via Facebook and Twitter. Support even reaches across continents, with students from the University of Cape Town, South Africa standing in solidarity with students at University of Missouri.

The collective strength and perseverance demonstrated by students at University of Missouri has ignited an international display of love and solidarity. It brings a clear light to the fact that racism in all its forms, in higher education and beyond, is seen for what it is and won't be tolerated. Further, Concerned Student 1-9-5-0's movement is situated in a critical moment of national attention to racialized violence in America. Collectively, activists are proving that black lives do matter, whether or not our nation's institutions are ready to accept that.