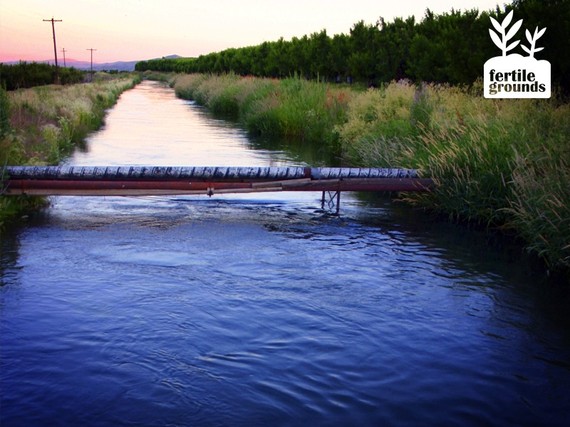 Agriculture is the biggest source of water pollution in the United States, and it remains largely outside the law. (Alexander Wishkoski/Istock)

A headline in the Des Moines Register recently attempted to reassure readers that "Iowa's Water Rarely Exceeds Lead Limits." This statement isn't the confidence-booster it's meant to be. For one thing, federal limits on lead in drinking water aren't protective enough, especially for those most vulnerable to lead poisoning: pregnant women and bottle-fed infants. And the foremost water issue for many in Des Moines isn't lead (although it may well be a concern). It's pollution from the farms that surround the city, which is infiltrating the city's drinking water supply.

Flint's water crisis has drawn national attention to a health threat faced by communities across the country: exposure to lead in drinking water. Stronger federal limits on lead and proper testing and treatment by water utilities, which often flout the law when it comes to lead, will help make drinking water safer. But water pollution from big industrial farms remains largely outside the purview of the law.

Agriculture is responsible for the majority of water pollution in the U.S. According to a report by the National Water Quality Inventory, agricultural pollution is "the leading source of water quality impacts on surveyed rivers and lakes, the second largest source of impairments to wetlands and a major contributor to contamination of surveyed estuaries and ground water." Agricultural pollution threatens the drinking water of millions of people from Midwestern cities to California farmworker communities to North Carolina's hog belt. Every time it rains, chemical fertilizers, pesticides and animal wastes from industrial farming operations wash off fields and into streams and rivers where they can contaminate drinking water supplies.

In Des Moines, heavy spring rains have driven nitrate pollution in the Raccoon and Des Moines Rivers to record highs in recent years. Nitrates have been linked to miscarriages and cancers, and they can cause a rare but sometimes fatal illness known as "blue baby syndrome." (Exposed infants lose the ability to transport oxygen in their blood, causing them to turn blue.)

The problem exists throughout much of the Midwest. Ninety percent of Iowa's land is used for agriculture, and more than 60 towns and cities across the state have battled high nitrate levels in drinking water over the past five years. In Ohio, many people are still wary after a 2014 toxic algae bloom in Lake Erie, linked to phosphorus fertilizer from cornfields, contaminated the city of Toledo's water system.

While Earthjustice and others fight on behalf of communities that lack safe drinking water, we also work to keep agricultural pollution out of waterways in the first place. One way to prevent water pollution is to scale up the use of more sustainable farming and animal husbandry techniques.

In Iowa, some farmers are beginning to adopt cover crops, which are planted during the off-season to protect soil. Rye and oats, for example, prevent soil from eroding in the winter. Peas and beans help lock nitrogen into the soil, keeping it out of the water and available for next season's crops. Since 2009, the amount of cover crop acreage in Iowa has grown from 10,000 to 300,000 acres. However, that's still only about 2 percent of Iowa's cropland.

Other farmers are rediscovering the ancient technique of intercropping -- growing multiple crops like corn, beans and squash on the same field -- which improves soil health and reduces the need for pesticides and fertilizers. Rotating crops throughout the year, rather than planting only corn, also helps farmers cut back on chemical use. Buffer strips of grass, planted alongside streams and wetlands, can help keep fertilizer out of waterways.

Some farmers in Ohio are experimenting with technological solutions, such as drones and GPS systems, to help make fertilizer application more precise and timely. The USDA just launched a three-year, $41 million initiative to support farmers who are working to keep pollution out of Lake Erie.

However, such initiatives pale in comparison to the billions of taxpayer dollars that support the industrial farming of corn and soy. As long as crop insurance and other subsidies make corn and soy the most secure crops a farmer can grow, there's little incentive to run a small-scale, diversified farm. And as long as agricultural operations are exempt from the Clean Water Act -- the fundamental instrument that keeps water pollution at bay -- there's little incentive for farmers to make investments in techniques that reduce pollution.

We need to ensure that utilities are adequately testing and treating our drinking water, and we also need to work harder to keep pollution out of waterways in the first place. If there's one thing we've learned from Flint, it's that failure to protect water supplies can be a tragic public health and economic miscalculation. Changing U.S. farm policy to encourage more sustainable farming, as well as holding the agriculture industry to the standards of the Clean Water Act, will help protect safe drinking water for millions of Americans.

Fertile Grounds is a blog series that examines the challenges and opportunities in ensuring access to healthy, sustainable and affordable food for all. We talk about the entire lifecycle of food -- from seed selection and planting to consumption and disposal -- because there is potential for improvement throughout. We're informed by the expertise of our many clients and allies and by Earthjustice's years of work to ban harmful pesticides, encourage sustainable farming methods, reduce pollution, support farmworker justice and promote a healthy relationship between farmers and communities.