The following words were spoken over me when I first entered the world. "I bear witness that there is no god but Allah, and Muhammad (SAW) is His messenger."

My name has always been my most consistent connection with Islam. I never prayed five times a day or wore hijab, but being raised Muslim has always been a part of my identity that I've claimed, critiqued, honored, and appreciated. In my growth as a social justice educator, I've become more and more critical of organized religion--seeing the value in it while also seeing how dangerously indoctrinating it can be. As I continue to learn more about myself, my relationship with religion wavers.

Born to a Catholic mother and a Muslim father, raised by my Muslim grandmother while attending Catholic school, I tried my best to both fit in and stand out during my formative years. I had confusing interactions and deeply transformative experiences.

I've fluctuated between feeling pride, frustration, fear, and joyous community around my Muslim identity. In elementary school I would lie and pretend I was Catholic like everyone else. I would sneak rosary beads under my uniform, tell stories about my baptism, pray the "Hail, Mary" and the "Our Father" right along with my classmates. I was already different enough because I was a Black/Puerto Rican girl in a predominately White school, with kids I perceived to be wealthier than I. But then, Ramadan would come around, and I saw the strength, commitment, and spiritual journey my family's community was undertaking, and I would feel overwhelmingly proud. I'd skip lunch, announce that I was fasting, pray during recess. I no longer needed to fit in.

And then, in seventh grade September 11th happened. I'd never heard the term "terrorist" and didn't know who Osama Bin Laden was. I can't even recall if I had knowledge of the Middle East, at least not with any real historical understanding. My grandmother and I went to the Mosque one day following the attacks. Typically, I would put my hijab on in the car, walk into the Mosque, and take if off once I got back in the car. But after September 11th happened, I started wearing my hijab all the way home, even if we made a few stops along the way. I was not afraid for people to see I was Muslim. I knew what I was hearing on TV and in school were lies, a narrow perspective, and not the whole truth. Those "terrorists" were not a reflection of my religion or my community.

So while I'm not currently a "practicing" Muslim in the traditional sense, I was raised Muslim and it's a deep part of my identity. It instilled in me a sense of community, peace, strength, and resilience. I claim Islam the same way I claim being a woman, being Black, and being a Latina.

For those who wish to better understand the Muslim community, here's what I can offer.

As a Black Muslim, if I were to do something, my actions would be deemed representative of my whole community or communities, regardless of if I was acting in the name of that community or not.

But if my neighbor steals a loaf of bread, does that mean our entire neighborhood community is made up of thieves and we should all be condemned for the actions of one person?

Not all people who wear scarves or turbans on their head are Muslim. The Sikh community, which also wears turbans for religious reasons, has been targeted immensely with anti-Muslim violence. Sikhism is the world's fifth-largest religion, a monotheistic faith founded in the Punjab region of India about 500 years ago. Most of the world's 25 million Sikhs live in India, but more than 500,000 make the US their home. You can read more about them here, but the targeting of Sikhs is a direct result of generalizations, misinformation, and ignorance.

Muslims are diverse, complex, and individually very different just like Christians, Jews, and Atheists. Some celebrities who're Muslim include Dave Chappelle, Dr. Oz, Zayn Malik, and Iman. That's already a very diverse group of individuals. Islam is a religion that spans hundreds of nations and is claimed by billions of people. This idea that we can ban an entire religious group from a nation is not simply an idea. It's been done before with horrifying, disastrous results. We look back at those moments in history with shame and disgust.

Time and time again we see mass media and Internet trolls demanding that the entire Muslim community speak out against terrorist acts committed by other Muslims. Muslims don't have annual or bimonthly meetings. There is not a newsletter we all subscribe to. We don't even all speak the same language. If we are not going to hold all other religions to the same standard--that they should speak out when other members of their community commit acts of terrorism in movie theaters, churches, and schools--then we shouldn't expect that from anyone who identifies as Muslim.

We are at a very interesting crossroads at this time in our nation. What was once a chuckle has turned into deep concern. We have racist, sexist, homophobic, Islamophobic individuals running for the highest office of this nation.

I urge you to think about what it truly means to be in a community. And if you haven't read the Qur'an, understand much about Islam, or know a Muslim, I hope the next time you hear a racist, sexist, Islamophobic remark you think about me, my family, and this story. I'm a member of your community and so are billions of others just like me. Let's move forward from fear and discomfort to a place of courage--together. 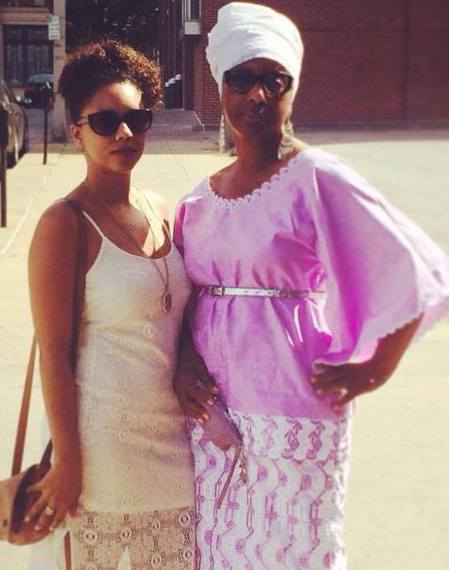