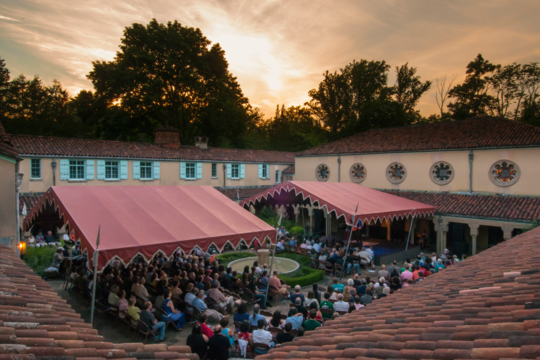 I'd rather hear music than the person in front of me whispering. This is what I was thinking at my last concert when, plain and simply, they wouldn't shut up.

Has etiquette gone out the window completely?

Stop kicking the seat in front of you, put down your cellphone and listen up. Let's talk.

Rudeness at live performances is disruptive not only to the performers but to the audience. A philharmonic musician I know mentioned that at one concert a colleague stopped cold in the middle of a complicated composition when a cellphone fired off in the audience. (Hello?! Don't we know by now to turn off our electronic devices before a performance? It seems obvious, but clearly some patrons of the arts have still not read the memo.)

I recently attended a senior-thesis violin recital at Juilliard, the prestigious arts conservatory in New York City. The talent before us was brilliant. The audience behavior around me was appalling.

Everything below happened during this virtuoso performance. Most of the points seem obvious, and one would think that grownups would know better, but the fact that they have good taste in music doesn't mean they have the manners to match.

So take a moment to bone up on concert etiquette. (Feel free to share this list with others.)

At a Patti LuPone concert at the Caramoor Center for Music and the Arts, two audience members got up toward the end of her finale. Patti abruptly stopped singing and said, "I hope you get to your car in time." The audience laughed. A spotlight shined on the couple as they slithered out of the concert tent. Brava, Patti! Love your moxie!

Yes, audiences in the 19th century may have been equally rude by throwing tomatoes, but it's 2014, people. Surely we have learned some manners in the past century.

Ladies and gentlemen (which I believe you are), behave. Sit back and enjoy the show so that others can do the same. After all, as an audience, you are collectively sharing a magical moment that will be gone forever once the last note or word is played, sung or spoken. This is the beauty of live performances. Don't wreck it with slack etiquette.

CORRECTION: An earlier version of this post misidentified the Spanish Courtyard at Caramoor as the Venetian Theatre at Caramoor. The post has been updated accordingly.