My college Spanish classes didn't prepare me to follow the rapid-fire conversation my driver was having with three of Mexico City's finest.

I tried to eavesdrop from inside the car, where my friends and I looked at each other nervously. Outside, the driver was shouting and gesturing wildly.

We had been warned by our polite but obviously flustered chauffeur during our quick walk from the baggage area to the pick-up spot that there was a "small problem" with the car. I rolled my eyes, figuring we were in for a 15-minute wait as a tire was changed or a belt was replaced. But as the glass doors parted and we walked into the warm summer air my eyes immediately fixed themselves upon the flashing blue lights.

Nervously seated inside the car, I glared at Kathleen, who had booked the Mercedes limo despite my strong preference for the airport's secure and hassle-free taxi system. My friend, a self-professed princess, wanted to ride to the guest house we had booked "in style." As additional cops approached the car, I feared we'd ride not to the guest house but to the big house, and not in style but in cuffs.

It didn't help my paranoid mind that the final member of our traveling trio, a Mexican-American who had lived in this chaotic metropolis for six months, had spent part of the flight sharing stories about the country's corrupt police officers, who sometimes pressured tourists for bribes to supplement their meager paychecks.

I resigned myself to the fact that I would soon be parting with a couple of twenties. But after about 15 minutes of backseat uncertainty we figured out that this was not a case of a big, bad police officer hassling gringos for no reason; the limo company lacked the proper permission to operate within the airport's grounds. No Spanish was required to understand that we would not be taking the Mercedes into the city center -- the jolt we felt when a tow truck attached itself to the front of the car made that quite clear.

We literally jumped out of the limo and grabbed our bags so we could continue the wait on the sidewalk. My face turned a pale red as passersby gawked, sending me "it sucks to be you" looks. As we grew increasingly embarrassed and frustrated, the car company finally gave up the fight. Management decided to send a Town Car, which took us a scant mile away from the airport, where another permit-less limo could legally receive us. This slightly older model wasn't as stylish as Kathleen had wanted, but it got us away from the arrivals area and to our charming, tranquil guest house suite in the city's chic and, thankfully, hassle-free Condesa neighborhood. 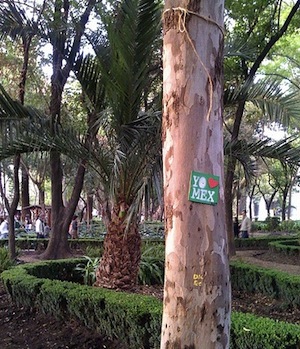 Our first few minutes at the Red Tree House (named after the red Christmas light-adorned tree in front of the building) were as calming as our airport experience was jolting. After greeting the friendly house dog, a yellow labrador named Abril, the smiling and helpful owners, Jorge and Craig, walked us up to our private third-floor space. They gave us a quick tour of the beautiful main bedroom and the cute detached studio on the other side of the large rooftop patio. After sliding a CD into the appropriately sleek stereo and pouring us some Mexican red wine, the men left us to run around our vacation pad, oohing and ahing over the small but modern kitchen, stunning tiled bathroom and comfortable leather sofas.

Travelers to Mexico's capital have many options when considering where to stay, but Condesa was perfect for us and I imagine it would be ideal for nearly all travelers to the city. The neighborhood contrasts with the city's cliched reputation as a smog-covered, overcrowded headache for tourists. Sure, Mexico D.F. sometimes lives up to its stereotypical image. One of the world's largest and most chaotic cities, this megalopolis requires that visitors be a little more patient and dig a little deeper than they might in, say, a Western European capital. But Condesa is a hip and surprisingly European area that still feels authentically Mexican.

The area was developed at the turn of the 20th century in what had been a racetrack. Visitors may notice how one of the main streets, Avenida Amsterdam, is really an elliptical loop. There, one can still find an old street sign from Amsterdam's racing days; it reads Avenida Hipodromo (Spanish for racetrack). Condesa maintains its old-world charm but offers a modern twist. With its ethnically diverse restaurant choices and mix of youth-oriented bars and lounges, Condesa has been deemed the SoHo of Mexico City.

During our four-day stay in D.F. our group made it to Frida Kahlo's colorful house-turned-museum, the Casa Azul, in addition to the gorgeous Metropolitan Cathedral, the neighboring Aztec ruins (the Templo Mayor) and the Fine Arts Palace, home to some of Diego Rivera's thought-provoking murals. Despite the innumerable attractions throughout el D.F., my two friends and I always were excited to head home each night.

When in Condesa, we stuck mostly to Avenida Amsterdam, which circles the peaceful Parque Mexico, and the busier Avenida Michoacan, off of which we found our favorite restaurant in an area full of gems. La Buena Tierra, on Avenida Atlixco, is one of those rare vegetarian-friendly restaurants that doesn't alienate carnivores. At our heated outdoor table, my friends and I sipped sangria and sampled an authentic and delicious chicken parmesan, rich enchiladas and the house-specialty appetizer, the appropriately named "arroz la buena tierra (the good Earth rice)" This sweet rice dish featuring carrots, dates, plantains, apples and almonds appealed to everyone at the table. 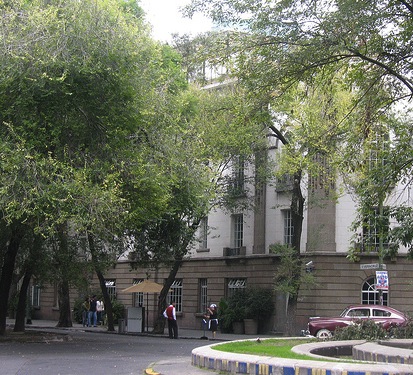 We spent the final few daylight hours of our trip enjoying cocktails and a fantastic view of the area from the rooftop lounge at Condesa DF, a boutique hotel that exemplifies the neighborhood; the antique cars parked outside and the mansion's early 20th century exterior pay homage to Condesa's sophistication, but the hip, modern interior reflects the area's youthful spirit.

I gawked a bit as I walked across the open and airy all-white courtyard toward the elevator, which took my party up to the rooftop lounge. After walking around the deck to check out the breathtaking views of the mountains and Chapultepec Park, we headed to one of the plush seating areas and ordered relatively expensive but strong drinks. We put up our weary feet and enjoyed the sounds of Condesa: a nearby fountain, the plethora of dogs being led by their owners and a few kids playing. And, thankfully, not one police siren.