When I began dreaming about Condoleezza Rice, four years ago, I had no idea she was a torturer. Forbes named her 2005's Most Powerful Woman in the World, and that inspired me to make a movie about her. Courting Condi would be a 'musical-docu-comedy' about one man's attempt to win the heart of a Great American Woman. I found a man who was in love with her: Devin Ratray, a musician and actor who found fame as Buzz in Home Alone. I began building a production team that would eventually encompass 210 film professionals. Discovery agreed to finance the movie.

One week before shooting, trouble began. Our attorney called to deliver some devastating news: Discovery was pulling out. Karl Rove had taken the CEO out to lunch and warned him that unauthorized films about the administration's beloved 'steel magnolia' could compromise the company's "good relations with government" and damage its upcoming public offering. Discovery caved, and gave me a terrible choice: sue for breach of contract and become mired in years of legal nightmares, or take a $150,000 'kill fee' and sit on a beach for a year. I took the money, and persuaded our crew to work for a deferred payment -- which meant no one got compensated until we sold the film.

Shooting the film took us on a roller-coaster through Rice's life and across America. We began in her birthplace of Birmingham, Alabama, where her childhood friends showed us the segregated hospital where she was born and the home in which she first learned to play the piano. In Denver, we sat down with Rick Upchurch, a former star wide receiver for the Denver Broncos and the only man to have been engaged to Rice. Upchurch told the moving account of how Rice broke off their wedding plans after Jimmy Carter offered her an internship at the Pentagon. "She chose power over love," he sighed.

We traveled to Stanford, where her supporters praised her fine teaching, and her critics lambasted her for dismantling the affirmative action policies that helped her become the university's first female or black Provost. We cheekily engineered a door-step interview with her beloved step mother, who reluctantly agreed to ask Condi whether she had listened to the 'Love Disks' -- romantic ballads Devin (Buzz) had written, accompanied by music videos our talented team created -- that we had mailed to Secretary Rice at the State Department.

By the time we made it to Washington DC to explore her time in power, Rice was on to us. Our crew was under constant surveillance. State Department agents came round to our inn to interrogate Devin and me -- a terrifyingly hilarious event that we documented on camera:

I was disheartened that she had refused our requests for an interview, but others acceded, including Republican colleagues, her top biographers, and various members of Congress. Their accounts of her record as National Security Advisor (2001-2005) and as Secretary of State (2005-2009) did not paint her in a good light. CIA boss George Tenet described how she recklessly ignored warnings about al-Qaeda threats in 2001. Counter-Terrorism chief Richard Clarke relayed how she had conspired in the fabrication of a link between 9/11 and Saddam, churning up the case for war in Iraq ("We don't want the smoking gun to be a mushroom cloud"). Congressman David Price castigated Rice for failing to provide oversight over private contractors in Iraq and then covering up the 2007 Nisour Square massacre. Spike Lee berated Rice for her jolly outing to see Spamalot while families were drowning in New Orleans. I was finding it very hard to find anyone who could point to anything positive that Rice had achieved while in office.

It was a shocking interview with Colonel Lawrence Wilkerson, Colin Powell's Chief of Staff, that made me realize that Rice's story was a Faustian tragedy of the corrupting impact of power. A lifelong Republican, Wilkerson was party to the meetings of the senior Bush officials who decided what 'enhanced interrogation techniques' would be used on which 'illegal enemy combatants'. He reported that it was Rice, as chair of that 'Group of Principals' who personally signed off on the CIA's torture menu, which included water torture, sleep deprivation, and stress positions. She then sent CIA director George Tenet on his merry way with the words, "this is your baby, go do it". In Courting Condi, this revelation was the last straw for Devin, who writes one last angry break-up song to her, and returns home, as disappointed as many Americans were in the Bush administration.

In November 2008, after a year of careful editing, we premiered the film and toured it on the festival circuit around the world. In Novi Sad, Serbia, a professor of social sciences took me to the banks of the Danube and showed me the Liberty Bridge that had been blown up by a US-led NATO strike in 1999. "America attacked us because they said our president Milosevic was a war criminal. So why don't they use the same principles to hold Rice accountable for war crimes?"

In Jecheon, South Korea, audiences laughed gleefully at a lyric about Kim Jong Il shaking with terror at the prospect of Rice's kicking his derrière. In Sao Paulo, Brazil, a student said he was saddened: "I learned about our military dictatorship and the cruelty of torture from Brazil's history. Even though we now have a democracy here, I know that our police still use torture. But until this film, I never suspected that the American government tortures people."

Major distributors were turned off by the controversial nature of the film, and the possibility that Rice might sue. We only had a limited theatrical run. The failure to sell the film, and to pay my team, continues to be a deep disappointment. But on the festival circuit, we won 26 awards and received fine reviews. The film was noted as 'historic' in three areas: The first musical docu-tragi-comedy in the history of cinema; the first musical ever shot outside the White House; and the first film to win awards in both Best Documentary and Best Narrative Feature categories.

We gained notoriety when a screening at Stanford was canceled at the last minute after Rice's supporters threatened the undergraduate head of the Stanford Film Society, telling her that she was jeopardizing her future at the University. Amnesty International stepped in and screened it, but its representative told me that she felt we could have investigated Rice's misuse of power further.

That prompted me to dig deeper and make a new film -- a straight, investigative documentary that would come to be called American Faust: From Condi to Neo-Condi. The film overturns the misconception of Rice as a yes-woman, and reveals her to be not only President Bush's most enduring confidante, but also his own personal Torquemada. It draws the dots between her as a leading force in the Principals committee, through the CIA, to the prisoners who endured the violent acts she played a complicit role in authorizing. Some of these torments go far beyond what has so far been publicized: genital mutilation in the case of Binyam Mohamed; fingernail extraction for Mamdouh Habib; and electrocution for Abu Omar. 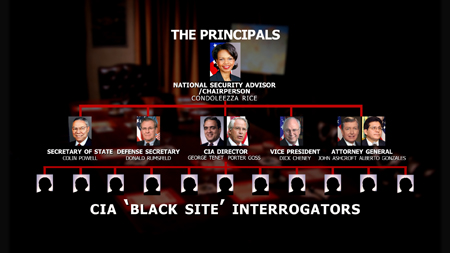 The film also shows how the CIA implemented the torture through a global patchwork of 'black sites' that include Thailand, Italy, Somalia, as well as 'torture ships' in the Gulf of Aden. Leading human rights attorneys, as well as the UN's Special Rapporteur on Torture, Manfred Nowak, and Rice's own history professor, Alan Gilbert, allege that Rice's actions constitute both torture and war crimes. These experts explain how her acts are defined as criminal in the US Constitution's prohibition of "cruel and unusual punishments"; the 1949 Geneva Conventions; and the UN Convention against Torture, to which President Ronald Reagan -- Rice's role model -- signed up to in 1988. Because Article Six of the Constitution enshrines treaties as "the supreme law of the land", President Obama and his Attorney General, technically, have an obligation to uphold them and arrest alleged war criminals such as Rice and prosecute them in Federal Court.

With such a 'smoking gun' still in her hands, I am flabbergasted that Rice remains at large. We filmed her at Stanford University claiming, Nixon-like, that "by definition, if the President authorized it, it did not violate our obligations under the Convention against Torture". This is as brazen a perversion of the law as the memos written by White House attorneys claiming 'water-boarding' was legal, which Rice uses as further justification for her torture program.

The media has ample evidence that the Rice-blessed torture program had maimed, injured and killed people around the world. Yet the New York Times was announcing the $2.5 million publishing deal she had just made. ABC interviewed her gushing about her well-paid tenured position at the Hoover Institution. And CNN was sharing in her joy at having taken up golf. Why no mention that Rice's orders had led interrogators to razor-blade a man's penis, and then pour acid into his bleeding wound? 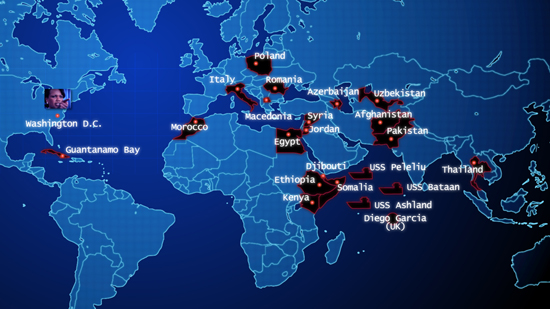 An illustration of CIA "black sites" that were used to interrogate detainees around the world.

From 1944-1945, my grandfather, a Dutch resistance fighter, was imprisoned and tortured by the Luftwaffe. He was too dignified to tell me the details of the Nazi interrogation methods he suffered. He was also adamant in his quiet conviction that the only good thing to come out of such acts of inhumanity was that the Nuremberg trials and the Geneva Conventions established that they could happen "never again". The Scheveningen prison where he was tormented is now used to house alleged war criminals like Serbian Radovan Karadžić, and Congolese Thomas Lubanga and Germain Katanga, on trial at the International Criminal Court. The ICC is a body that could try Rice for war crimes, were it not for the fact that the US remains one of the few countries in the world that refuses to sign the 2002 Rome Statute.

I thought of my grandfather when I received American citizenship three days after President Obama was elected. The Irish-born judge who presided over my swearing-in urged all 400 of us new Americans to go out and do our duty as citizens. I realized that I had a civic duty to tell the story which four years of Rice research had given me. The media had failed to expose her possible crimes. Congress, scared that an investigation would reveal its own complicity in torture, has failed to exercise oversight on the Bush executives. President Obama has shown no conviction that torture is a crime, or that the prosecution of torturers is essential to uphold American values, regardless of the cost in political capital. This has been most egregiously demonstrated by the decision of Obama's Attorney General, Eric Holder, not to include Rice and other Bush officials in his investigations into CIA-committed torture.

Film has the ability to instigate change. Look at what Food, Inc. has done to bring in new proposals for farming regulations, or what An Inconvenient Truth did to raise awareness about global warning. I hope that our two films, which are released today, will help galvanize forces to hold Condoleezza Rice accountable, under the principle of command responsibility, for the crimes she ordered. And I hope that her conviction establishes a precedent that ensures that our elected officials "never again" resort to torture.

Check out the films here.