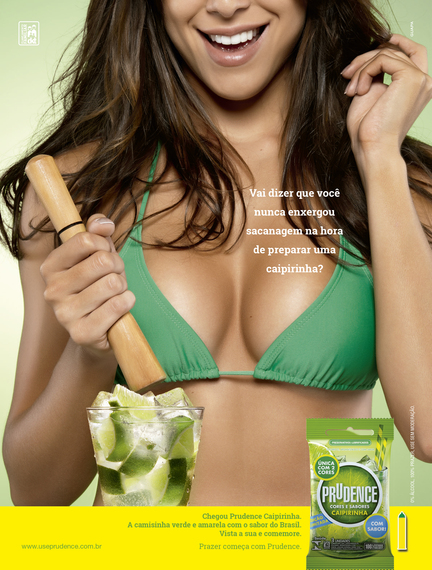 An advertisement for Prudence Caipirinha, the new flavored condom brand from DKT do Brasil.

"DKT do Brasil," the social marketing juggernaut of South America, started in 1991 with one variant of Prudence condoms (now called Prudence Clássico). Over 23 years, DKT has grown that product line into 40 variants, with its latest offering featuring the flavor and scent of caipirinha, the iconic Brazilian cocktail made from cachaça, lime and sugar.

Over that same time period, its condom sales increased from 30,840 in 1992 to 124 million in 2013. This is considerably more than the combined total sales of every other condom social marketing project in all Latin America -- South America, Central America and the Caribbean -- according to DKT contraceptive social marketing statistics.

And yet DKT do Brasil does not consider itself a commercial enterprise, but a social enterprise. All of its products make money, and yet all are within the contraceptive affordability index, which dictates that the cost of contraception should be less than 1 percent of a family's annual income. In fact, its cheapest condom, Prudence Clássico, is only 0.22 percent and even its most expensive brand is less than 0.5 percent.

How has DKT do Brasil been able to become the largest social marketing operation in Latin America, and one of the largest condom distributors in Brazil, while remaining true to it mission of "improving lives by encouraging family planning, sexually-transmitted disease prevention, pleasure and well-being; offering products that are accessible, diverse, innovative and high quality in Brazil and South America"?

One of the keys to its growth has been its diversification into condoms with different scents, flavors and features.

It introduced scented condoms in 1999, special feature condoms (like ribbed, dotted, extra sensitive, extra large, etc.) in 2006 and flavored condoms in 2010. Caipirinha condoms are only the latest example of a long line of flavored condoms that includes banana, chocolate, cola, grape, mint, strawberry, tutti-frutti and watermelon. DKT, in fact, was the first company in Brazil to launch flavored condoms and now dominates that market.

In Brazil, 25 percent of all condoms are flavored, and DKT is the market leader in flavored condoms, with 35 percent of the market, said Dan Marun, the country director of DKT do Brasil.

"People like different things," said Marun. "The Brazilian consumer, including condom consumers, is becoming more sophisticated. The consumer is looking for something more fun. These special flavors have been key to our condom growth."

Marun said that these condoms attract a younger and more feminine clientele. "Women like colors, flavors and scents," he says. "I think women prefer Prudence because of all of our colors and scents."

It doesn't hurt to have these flavored condoms supported with sexy TV advertising like this TV spot. DKT do Brasil has long used eroticism to promote safe sex.

The meteoric rise of DKT condom sales in recent years have been strongly fueled by scented and flavored condoms and the special feature condoms as compared to Prudence Clássico, the mass market condom brand.

Marun says there's been a huge change in how DKT advertises condoms since 2008. Before 2008, their advertising budget was 100% traditional media. Now it's 70 percent traditional media, 30 percent online. DKT employs Twitter, Facebook (Prudence has almost 700,000 followers on Facebook), Instagram, Pinterest and blogs to get out its messages and stimulate discussions of DKT products.

"We try to talk to different people through different channels," Marun says. "We don't have the same communication channel for everyone. This way we can really create a conversation. We provide content on our products to our consumers: They are very engaged and talk about their sexual experiences. It's crazy. They feel they are in a safe place, talking about sex online."

Social media has certainly helped create a buzz around the scented, flavored and special feature condoms. In fact, the idea for caipirinha condoms came from a suggestion posted by a follower on Facebook.