The San Diego Zoo welcomed its first California condor chick of the hatching season on Feb. 24, the zoo announced yesterday (March 11), as part of their breeding program to help save the endangered species.

The two-week-old condor, dubbed Wesa, is doing well and has a healthy appetite, eating up to 15 mice a day, the zoo said in a statement. Like other condors born at the zoo, Wesa will eventually be released into the wild.

Senior condor keeper Ron Webb has been caring for the baby bird with the help of a condor hand puppet. 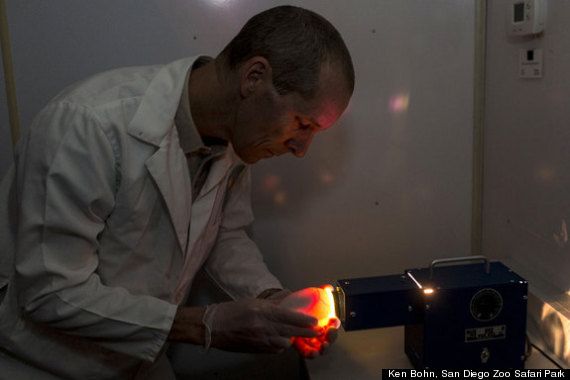 Ron Webb, a senior condor keeper at the San Diego Zoo Safari Park, holds a California condor egg up to a bright, warm light to monitor the development of the chick within in a process called candling.

"The puppet is like a fancy glove," Webb said in the statement. "It covers our hands so the chick does not get any beneficial experiences from people. We do not want it imprinting on people or getting used to us when it goes out into the wild. We want it to be a nice, wild animal, not relying on people for food."

Webb has also been monitoring the other condor eggs set to hatch this season to estimate how long before each chick pips, or breaks through its egg shell. He uses a technique called candling that shines a bright, warm light on the eggs and allows him to see how the chick is developing. In a photo released by the zoo, Webb is examining an egg on March 11 that he estimates will hatch in 21 days. 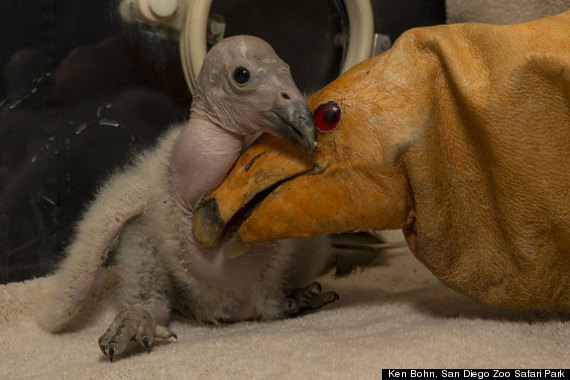 Two-week-old Wesa is the first California condor chick of the season born to the San Diego Zoo Safari Park in 2013. The condor puppet is like a glove and used by keepers to care for the baby bird and avoid it identifying with humans.

California condors are listed as critically endangered. When the zoo began its captive breeding program in the 1980s, there were only 22 birds in the wild. Since then, the zoo has hatched 173 chicks and released 80 birds into the wild. There are now an estimated 400 wild birds.