A Michigan food tradition finally gets the memorial it deserves with this week's official release of "Coney Detroit," a mouth-watering coffee table book by authors Katherine Yung and Joe Grimm.

An explanatory note for non-Michigan readers: A coney dog is a hot dog with onions, yellow mustard and a meaty coney sauce. For less than $2, one up (a dog with everything) is a cheap meal served in the hundreds of coney island restaurants in metro Detroit, as well as other locations across the state.

Anyone confused about why Wayne State University Press would release a book about a hot dog has clearly never sampled the regional delicacy. With closely-guarded sauce recipes, hand-cut onions, and natural-casing dogs sourced from local companies, the coney formula has been tested and perfected in Detroit for nearly a century.

Grim pitched the idea for a book devoted to the love and history of the coney to Yung, a Detroit Free Press business reporter, over lunch at -- not surprisingly -- a coney island. While Yung didn't grow up in Detroit, she can't resist a good coney, or the hunt for a story.

"It was the type of project where you didn't really know what you were going to find," she explained. "There's no historic archive ... we had to go out and find the people."

One of the main stories in the book plays a central role in Detroit lore: the epic feud between dueling restaurants Lafayette Coney Island and American Coney Island over who has the better dog. The two coneys, which sit side-by-side on Michigan Ave. downtown, were started by two brothers, but different recipes and decor have spurred rabid customer loyalties to one or the other.

The regional specialty hot dogs have been part of Detroit's food scene for decades, and the book traces coneys' beginnings and spread throughout the Detroit area.

"We wanted it to focus on coney islands that really have some history behind them and were really significant," Yung explained. "Narrowing things down, figuring out what not to include was one of the big challenges."

In an interview with Found Michigan, Grimm explained their theory of why coney islands exploded in Detroit:

"Only in this state, at the time that coney islands were taking off, did you have the auto industry. It was so busy here that the occupancy rate was over 100 percent. Everything that could be rented was rented, and some of it was rented two or three times a day. If you had a room, you had to be out by 8 o’clock in the morning because another person was coming off his shift and needed your bed. So when Greeks were starting coney islands in lots of states, only Detroit was going crazy. And coney islands were a great thing for a city that was full of young men who wanted a hot meal for not much money, in a hurry."

But while Detroit's declining population and economic downfall has led to some slower sales for coneys, Yung said for the most part, the restaurants and the dogs have weathered the storm.

"They generally can survive the tough economic times of the Detroit economy," she said. "Just because they're cheap -- it can cost you less than five dollars [for a meal]."

Grimm and Yung examine the distinctions of a Flint coney, and even find ex-Michiganders who love coneys so much they started coney island restaurants in others states.

And "Coney Detroit" answers the most important question: How do you eat a coney?

"I will admit it is a messy type of food," Yung said. "If I'm wearing nice clothes I might try to be more careful and use a knife and fork. If not, I'll pick it up with two hands and scarf it down."

For more on the Chili War of 1969, why Leo's Coney Island was almost Petes's, how Flint does it differently and where to get a coney if you're in Las Vegas, check out "Coney Detroit."

Yung, Grim and the photographers are donating royalties from the book to Gleaners Community Foodbank of Southeastern Michigan. The authors will be on hand at a release party at Gleaners on Wednesday, April 4, where coney lovers can pick up a signed copy as well as a coney dog, from 5:30 to 8 p.m. at 2131 Beaufait Street, Detroit. The event costs $3, or three canned goods, with all proceeds going to the food bank. Save your spot with an RSVP, and for more local events throughout April and May, see the "Coney Detroit" website.

Get a sneak peek below with photographs from the book's team of metro-Detroit photographers: 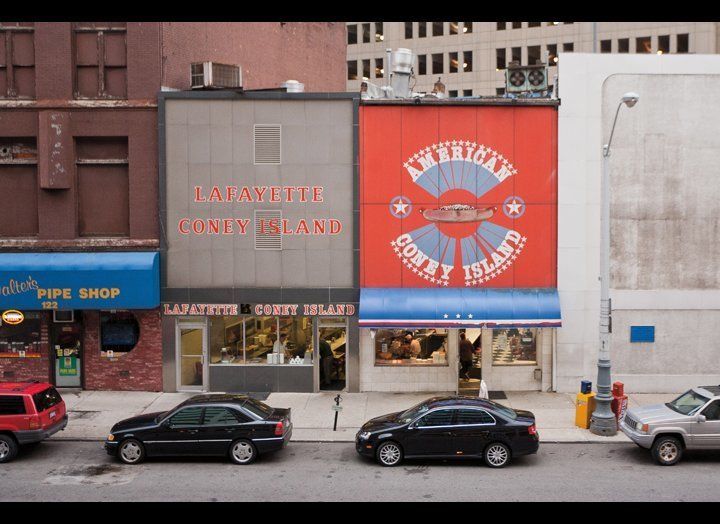 1 / 10
American Coney Island and Lafayette Coney Island are two of the oldest coney island restaurants in Detroit. Started by the same family, they each have very loyal fans. Photo by Keith Burgess.
Wayne State University Press