WASHINGTON -- As tributes to the Confederacy fall in the wake of the Charleston shooting -- 150 years after the actual fall of the Confederacy -- the legacy lives on in the hallowed halls of the United States Capitol.

Just steps away from a statue of civil rights hero Rosa Parks stands the statue of Alexander Hamilton Stephens, who served as vice president of the Confederacy. The statue describes him as "STATESMAN - AUTHOR - PATRIOT." The inscription offers his credo: "I am afraid of nothing on the earth, above the earth, beneath the earth, except to do wrong."

In 1861, he gave a speech in which he defended the institution of slavery and said it was "an error" to assume "the equality of the races."

"Our new government is founded upon exactly the opposite idea; its foundations are laid, its corner-stone rests, upon the great truth that the negro is not equal to the white man; that slavery subordination to the superior race is his natural and normal condition," he said.

His statue is part of the National Statuary Hall Collection. Each state has only two statues in this collection, which is meant to represent some of the most notable figures in American history. The state of Georgia contributed Stephens' statue in 1927.

On Tuesday, Senate Majority Leader Mitch McConnell (R-Ky.) said he would like the Kentucky state Capitol to move its statue of Confederate President Jefferson Davis to a museum. He didn't, however, make the same call for the statue of Davis in the U.S. Capitol, where he was making his remarks.

"With regard to all the statues in this building, I honestly don't -- I'm not aware of what we have and what we don't have," McConnell said.

Senate Minority Leader Harry Reid (D-Nev.) suggested that the board that oversees the statues in the Capitol take a close look at which figures are allowed in.

Some of the Confederate-era statues in the U.S. Capitol: 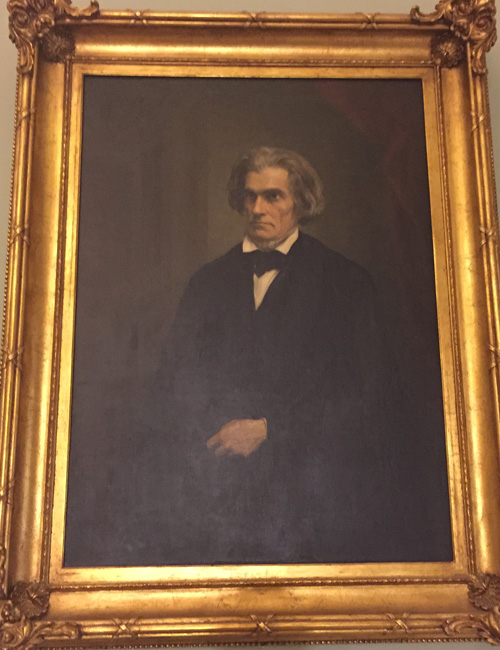 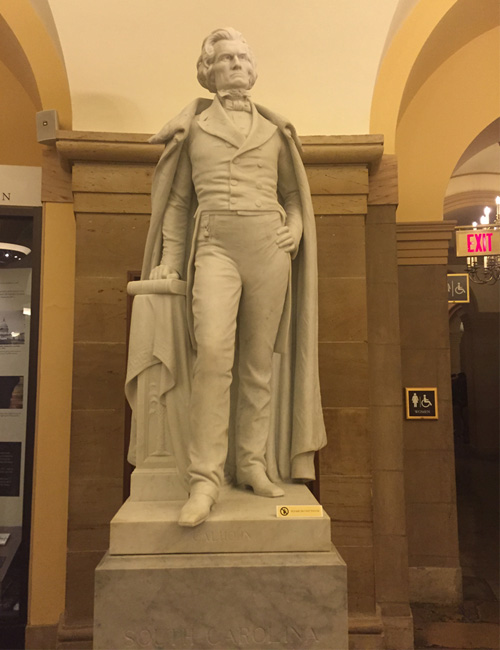 Although Calhoun died before the Civil War, he led the pro-slavery faction while a senator from South Carolina in the years leading up to the war. He famously described slavery as a "positive good" rather than a "necessary evil." He later served as secretary of war, secretary of state and vice president.

His portrait hangs just outside the LBJ room, where Republicans gather weekly for lunch meetings. 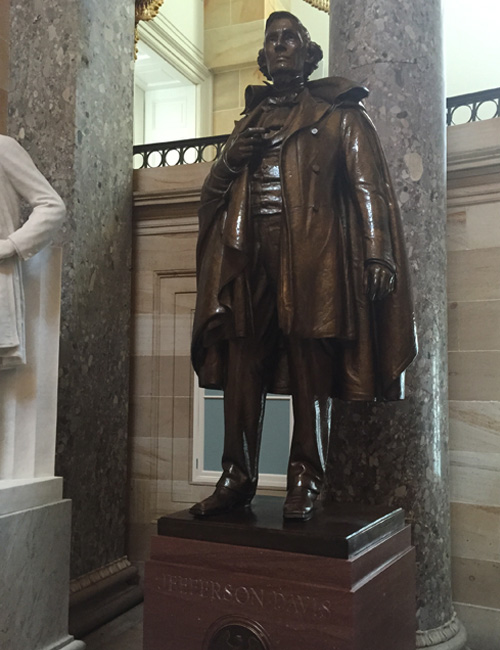 Davis was the president of the Confederacy. Mississippi saw fit to make him one of their two contributions to the Capitol. 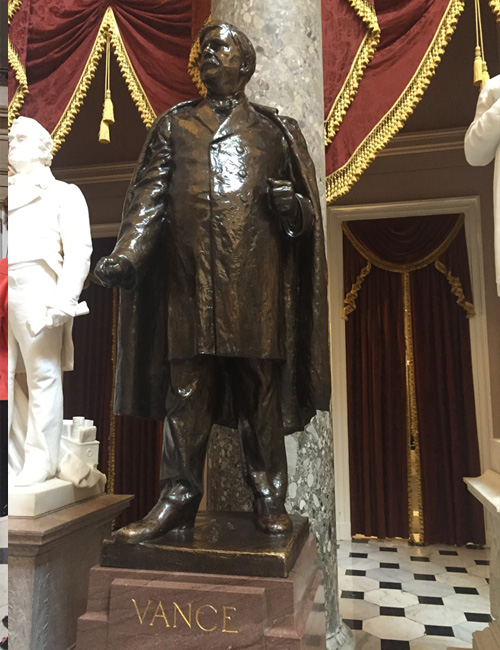 Vance was a Confederate military officer, as well as a governor and senator from North Carolina. 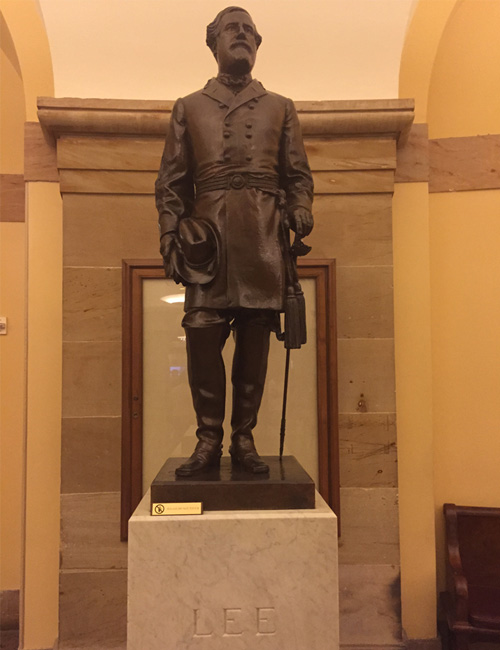 Lee was a commander of Confederate forces from Virginia. 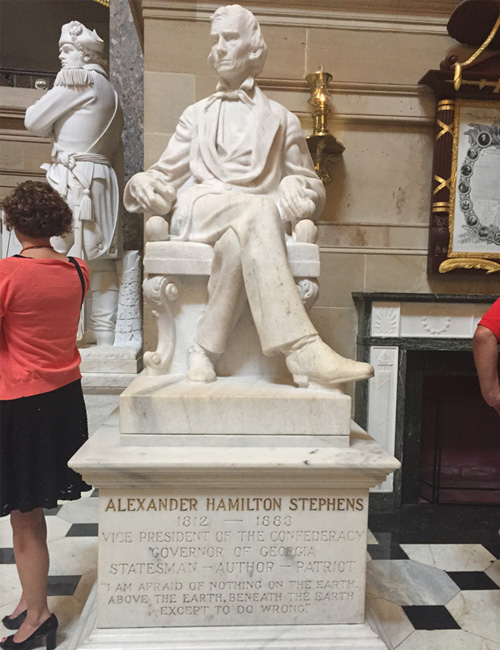 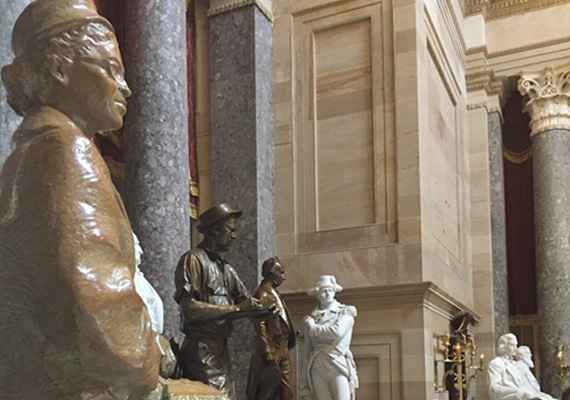 Stephens was vice president of the Confederacy. His statue in the Capitol is near the one of civil rights activist Rosa Parks.

UPDATE: 9:25 p.m. -- Roll Call's Steve Dennis caught up with Mississippi Sens. Thad Cochran (R) and Roger Wicker (R), both of whom stood by the Davis statue that their state contributed.

“I don’t know," said Cochran, referring to the matter of whether the statue should be removed. "I don’t want them taking my desk away either. That’s Jefferson Davis’s desk over there where I’m sitting. …I’m very proud to have that."

"Jefferson Davis is a historical figure to be studied and to be honored," added Wicker. "Was he perfect? No. Was anybody? No. But … to take a logical leap from changing a flag, that is seen by so many to be hurtful, to every historical figure that may have sided with the Confederacy or may have owned slaves or may have mistreated Native Americans, is I don’t think a leap that we want to take."