One morning last week, I awoke to find that the Internet no longer existed -- at least not in my house. I didn't panic right away. This was not the first time I had been Wi-Fi-less. I grabbed my mug of coffee and let my husband do his magic. He would have that router blinking green again in no time. I sat at my desk and stared at my laptop. A few seconds went by. Seconds turned into minutes, and I was losing patience. A half-hour later, I realized that my entire morning routine was shot. No checking mail, no Facebook feed, no TweetDeck. I walked around the house looking for something, anything, meaningful to do. Coffee was literally the only thing I had left, so I sipped and I paced. Defeated, I walked into the office my husband and I share and made my shameful admission: "I have no idea what to do with myself."

But then I had a beautiful revelation that came in the form of the familiar beep of an incoming text message. My iPhone! As my daughter's favorite literary character would say, "I had totally forgotten about that useful thing!"

So there I sat at my desk, coffee in one hand, iPhone in the other, and I completed my morning ritual, albeit on a much smaller scale. The world hadn't ended, after all, but the whole experience got me thinking. All this time, I had been doing my parental duty in terms of limiting my kids' screen time, but in complete and total (though unintentional) hypocrisy had allowed myself to become -- gulp -- a digital dependent.

I've never been a fan of that whole "Do as I say, not as I do" approach to parenting, so I knew I had to make a change. If I don't want my 11-year old to spend three-quarters of his life playing Minecraft, then I need to stop looking at the monitor long enough to take a good, hard look in the mirror.

It's really my little girls (ages 5 and 7) that I worry about the most, though. They've practically grown up with a tablet in hand. They are what CEO of Common Sense Media James Steyer would call "true digital natives." Yes, I set time limits and make sure that they get plenty of good old-fashioned outdoor play, but can I really expect them to strike a healthy tech-life balance when they're all grown up if their most influential role model (me!) isn't leading by example? 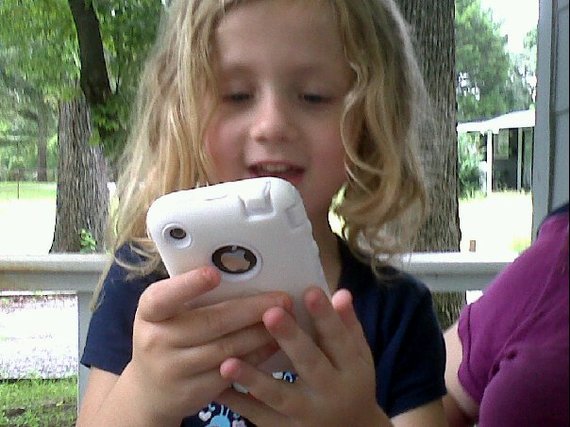 And then, I thought, hold on a minute. Am I freaking out for no reason? Like many moms, I've been known to do so from time to time.

Perhaps my Internet "dependency" is not an addiction at all, but a testament to my work ethic. Like a lot of people today, I make my living online. I research. I network. I tap out words like these. No offense to anyone who enjoys it, but I don't have time for Candy Crush.

Come to think of it, my son's online time, though spent more for entertainment purposes, also has its benefits. His digital obsession happens to be one of the more educational games out there. MIT professor Eric Klopfer recently told the New York Times that Minecraft "extends kids' spatial reasoning skills, construction skills and understanding of planning."

Much of the time my 14-year-old spends online, she spends watching art tutorials posted by experts like Mark Crilley and composing her own music using the online software MuseScore. She's not on Ask.fm looking for compliments from strangers or posting selfies on Instagram. We thank our lucky stars every day that she's not interested in the kinds of social media pursuits that lead so many young people astray these days.

My youngest daughters were well-prepared for Kindergarten in part because of computer programs like Red Apple Reading and websites like PBSKids.org. Of course, they like to play mindless dress-up games as well, and we allow them to do so in moderation. We consider these apps the paper dolls of their generation.

Clearly, technology has its place in our lives and can serve a number of different purposes, and many of them are good -- great, even! But, is there a line to be drawn, and if so, where?

Recently, the American Academy of Pediatrics drew theirs at a strict two hours of online time per day, excluding homework-related use. While this may sound doable, in reality, I know what a challenge it will be for many families (mine included) to implement. The Internet has become a mainstay in our house. It's always on. We rely on it. We learn from it. We relish in it.

Of course, that doesn't mean that no boundaries are necessary. After my own rude awakening last week, I've begun to make some small changes. I start the day off with some quiet time instead of email. I've prescribed myself some digital downtime throughout the day, and after my work day is over, I venture outdoors rather than online. But, it hasn't been easy, and I suspect it won't ever be. I feel the same pull towards instant information, entertainment and social connection that my children do.

Will I ever be able to strike the perfect balance? Probably not, but at least now, my eyes are wide open, and I'm taking a good look around. It's something I'm certain I'll need to do on a regular basis as technology changes and our interests evolve, both online and off. The Internet is mostly a positive force in our family, but I'm keenly aware that this could change. I know I'll need to keep my finger on the pulse of not just my kids' online habits, but my own as well. We will continue enjoying all of the positive things the Internet offers, but we won't let it hinder our most important connection -- the one we have with one another.