Okay, so Rick Perry thinks the Mormons are some kind of weird cult. And maybe, in the beginning, they were. Hell, even Brigham Young himself declared, "We are a peculiar people."
By the time my great-grandmother finally got here in 1860, Great Salt Lake City was occupied by federal troops. President Lincoln said he wanted to protect the overland mail, but the truth was also that he wanted to "keep an eye on the Mormons."

Mormons, then and now, may seem peculiar in these ways:

They are over-the-top proud of their history and their heritage.
Listen, do you know how tough it is to grow up in Salt Lake City as a descendent of Mormon pioneers? "What do you mean you want a ride to school? Because it's raining? Your great-grandmother walked here from Omaha, pushing a handcart, when she was ten years old, with the wind and rain in her face, her feet bleeding, over mountains and through rivers, and you want a ride? For six blocks, to school? Put your slicker on and put the hood up and get going."

They teach their children to behave, respect their teachers, and obey rules. Maybe too much.
Believe me, in the Mormon culture, RULES R US. Dave Barry came to Salt Lake City during the Olympics, and stood all amazed, watching the locals wait for the traffic light for permission to cross the street when there were no cars coming for miles. While New Yorkers think that traffic laws are just suggested guidelines, as Dave Letterman said, Mormons in Utah obey. It just comes automatically.

Look, I've been trying to be not-so-Mormon for quite some time now. I never go to church. I drink wine. I use bad words. But I break out into a cold sweat if my library book is overdue. Twice now, driving into the parking lot of our main post office, I have punched the button to get my ticket so the gate would go up, and waited patiently, until the driver behind me honked gently to remind me to look ahead and see that the gate was always up and there was no attendant. If anyone, anywhere, starts to pray publicly, I fold my arms and bow my head as I was taught.

They try to be a patriarchy with overtones of monarchy.
Like the Catholics, right? With religion, this is not really all that peculiar.

In trying to build what Joseph Smith and Brigham Young called "the Kingdom of God," they got a little carried away with the king part. Also the patriarchy part. 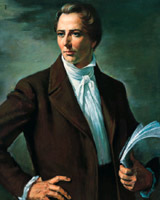 Tall, blonde, handsome Joseph Smith must have been surprised when a large group of people followed him instead of the dozens of other would-be founders of new religions in the 1830's in upstate New York. That gave him this wild sense of power, and of course all the girls were gaga for him. All he needed to do was nod at them and he could have them. (Poor Tiger Woods: If only he'd been able to tell everyone he'd had a little chat with God, and God told him that he needed to take lots of women as his wives!) Of course Joseph Smith was finally shot to death. Of course the Mormons were run out of town. Of course they had to move "to a place no one else wants," as his successor Brigham Young said, to a mountain desert where they could try new ways to live.

For Mormons, God is male, and He and the President of the Church communicate quite a bit, and must be obeyed. This belief does not bode well for intellectual inquiry from those asking hard questions. When asked tough stuff, Mormons will tell you, Well, that is yet to be revealed. But they have an underlying principle to live by, and that is this: A secure family is a nation's strength.

I say they try to be a patriarchy. Here in the heart of "Zion," a friend of mine who is a neurologist told me he sees countless Mormon men in his office. They come for relief of severe and chronic headaches. The man is usually slight in stature, and with him comes the wife, who is big, bossy, and bold. "Now Percy," she'll say, "tell him about your headaches, and speak up."

My neurologist pal says, "Do not tell me that the Mormon culture is a patriarchy. It's the other way around."

When Larry King interviewed LDS Church President Gordon Hinckley, Larry asked, "What do Mormon men do about women, President Hinckley?" Hinckley looked surprised. "We get out of their way," was his answer.

As to the monarchy question, separation of church and state ignites a lot of heated discussion here, as our legislature is 80 percent Mormon, overwhelmingly Republican-dominated, and we who have other opinions tend to fuss.

But nowadays we're not fussing about whether or not these men and women take orders from the "Prophet." We fuss because they've become power-hungry and corrupt. They appear shocked and surprised when their blatant, shameless conflicts of interest and gerrymandering enrage citizens of both parties. Personally, I suspect their behavior worries the church leaders, too, although they don't call me up to consult with me.

They mobilize to help people all over the world in times of disaster.
Whether it's Hurricaine Katrina, or the Tsunami in Thailand, or the earthquake in Japan, the Mormons have very often been among the first volunteers on the scene. Because of their own history of having to be totally self-reliant, they know what is needed and when. In 1983, when our own Salt Lake City was flooded, the world press came to watch a city drown. Instead, they found people going to work in rowboats, because the whole town had been organized to harness the water. The press stayed for a week, just to watch and report how organized the Mormons can be. When the dam broke in Rexburg, Idaho, in 1976, federal helpers straggled in to help, only to find that the Mormons had done everything that needed to be done days before they arrived. The federal officials stayed around and took notes. Believe me, these are the people I want to live around. If I am in trouble, my Mormon neighbors are there for me. They would be for you, too, even if you're not Mormon.

They believe in being thrifty, saving money, and never going into debt.
For our overspent country right now, to say nothing of other states, this must sound peculiar. One Mormon song goes, "Do no debt beyond your sweat, and you'll get to heaven yet, I'll bet." It is written in our state constitution that we cannot spend more than we have, and we don't, unlike so many other states, and both Jon Huntsman (do get to know him; he'll give you hope for Republican sanity again) and Mitt Romney would both consider getting us out of debt as a nation a first priority. So while I can't have the unshakable faith that many Mormons seem to have, they are indeed a group to "keep an eye on," and you might find they're okay. If I were you, I wouldn't be afraid of Mormons. They are the only original American religion. They may have started as a weird cult because of their sexy, megalomaniacal founder. They have made mistakes in the past. They keep trying to correct them and be loved. They are now very much mainstream and as monogamous as you are, despite what you saw in Big Love. So if you're wondering what to do with the Mormons, I'll tell you exactly what you can do with the Mormons. You can count on them.