We knew this day would come eventually. Our youngest son decided not to participate in travel hockey this season. He wanted to focus on school, keep his grades up, and enjoy the last year of high school.

We are okay with his decision, because he's the one that was playing. But I am missing it more than expected.

It felt like I was abruptly fired. Yet relieved in a strange way -- there seems to be so much more time in our schedule. And more money in the bank.

Once the new season started, it seemed like I was experiencing withdrawals. No -- wait -- it was actual withdrawals. For the past nine years of his life, we were at the rink BEFORE the crack of dawn and many times late into the night. We lived and breathed hockey. With other families. It was (and still is) a close-knit community -- one big family. We have made friends for life.

I signed both of my sons up for skating lessons and the local hockey club 11 years ago. My husband warned me that I didn't know what I was getting us into. (He's from Wisconsin and hockey was his sport.) Jacob's nickname quickly became Cutty in the hockey community. Cutty became obsessed with hockey, his natural skills improved with more training. He begged us to let him play travel hockey. We gave in.

By the way, our older son didn't have the same interest in the sport. He was involved with track and field and that sport rarely conflicted with the hockey schedule.

Cutty's team from three years ago won the National USA Hockey Championship for 14-year-olds. That is an amazing accomplishment, especially for a group of boys from Georgia. Three years later, a majority of the boys on that team aren't playing hockey anymore. A couple of boys moved away because their parent had a job transfer to another state, and a couple of boys decided to attend a prep school and play in the northeast.

Sigh. We had some wonderful moments together over the years. Traveling to different cities in the U.S., mostly the Northeast, eating awesome food, exploring. We even squeezed in a Canada trip and did snowmobiling.

Some people have questioned the decision to "let" our son stop playing hockey. "You've invested so much money and time!" Focusing on the financial and time aspect is the sunk cost fallacy -- it's in the past and can't be recovered. You have to move forward because life goes on.

The main benefit of his experience with a team sport like hockey (this applies to any competitive sport or endeavor), is to learn the connection of satisfaction and pursuing something you enjoy. Working hard at something won't feel like work -- you will be motivated to perform. The strong interest and focus he had is going to change to something else one day.

I wouldn't trade these experiences and memories with my sons for anything. Next phase is two sons in college. Ka-ching. 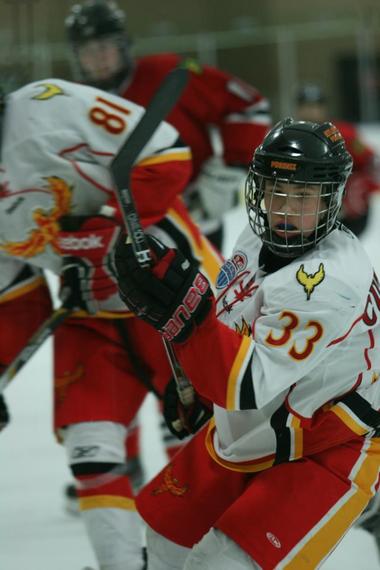 This was first published on Brigitte's blog.