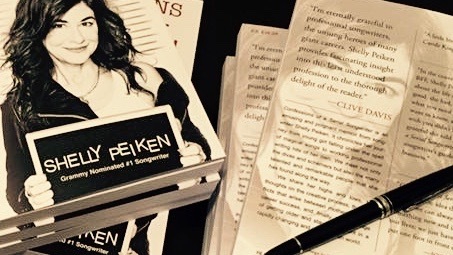 SOMETIMES I HEAR Simon and Garfunkel singing, "Slow down you move too fast." They're in a little bubble following me around as I scurry about my day. They're in my underwear drawer as I hurry to get dressed. They're in my coffee cup as I grab it to go. Those two heavenly voices; they sing extra loud when I'm multitasking. And I usually am.

See, I get caught up with work. I don't turn things down. I take a meeting and listen to lip service from the A&R exec who says he thinks my song is perfect, but I know he will ultimately use the one from a writer of whom he gets a piece. I get angry with myself when someone's album is finished and I didn't try hard enough to get a song on it. I go to a writing camp to try to raise my batting average, even though there's a decent chance the artist we are rallying around may be dropped. I often have a choice to make: write yet another song or go to lunch with the girls. I usually write another song.

Recently, things changed. I had had a tiny bump on my breast for years. It was barely noticeable and I had been assured it was nothing and would never turn into something. I'd been so busy, that I barely noticed it was getting bigger. So I went to my doctor. The second he touched it he said, "I don't like this"...and that's when things suddenly started to seem surreal. I thought about how my life might slip away from me in the next few months. I'd have to put everything on hold at least until I could find out just how much life I had left. He didn't waste any time. He made some appointments for later on in the day. It was a Friday. He didn't want to "have to wait out the weekend" to see what "we were up against." I liked how he said "we" even though it was actually just me!

I had a mammogram and then I waited in the waiting room for the ultrasound, no appetite for the first time in years. I flipped through magazines full of airbrushed PerfectGirls with PerfectTits, healthy recipes that could "put years on my life," anti-aging creams that could take years off. And there was Christina Applegate, that year's breast cancer Prom Queen staring back at me. What a SexySurvivor. I felt guilty for all the walks I sponsored, but never actually walked in.

Amazing, the things that seemed trivial. Car dents, cavities, song splits, bunions, cellulite, writer's block, that spinning pinwheel on my computer screen, facial hair, aging, A&R execs who manage writers, stopped-up toilets, the falling out I had with Simon, the falling out I had with Jeff, a few other falling-outs, albums not selling, streaming income, the constant rotation of Jack and Diane. I made promises to myself and deals with a God I'm not sure I believed in: if I get to live, I'll heed Paul and Art. I'll drink green tea (yuk), do yoga (yawn). I'll slow the fuck down.

The radiologist took me in to the examining room. I was on the alert for a widening of his eyes. He swirled the ultrasound probe over the bump and then he said, "I don't think this is anything to worry about." He elaborated, but I didn't hear anything else. As suddenly as my life flashed before my eyes hours earlier, it just as suddenly resumed.

I've never taken things for granted. My friends will tell you that I'm always professing how lucky I am...about all the blessings bestowed upon me. Along with my losses, I've had an abundance of wins and just the fact that I was conceived at all--that that one particular sperm merged with that one egg--is a miracle. I could so easily have been someone else if my father (or my mother) had coughed. I say this all the time. So it's not like I'm a boor who doesn't appreciate the improbability of existence...who isn't aware that I am merely dust in the wind. Here I am. I passed Go and collected two hundred dollars. But this experience was a wake-up call on a whole different level.

I decided I wasn't going to nag Adam to call the contractor about fixing the Jacuzzi pipe that he, the contractor, had broken. My husband hates confrontation and it's just not worth ragging on him to do it. I'm going to forget about telling my daughter to clean her room and instead just be grateful to have an untidy, imperfectly wonderful family. I'm outside in the soft shade eating watermelon, so slowed down I'm almost stalled. Do you hear me Paul and Art? I'm having a moment of self-reflection. Tomorrow, I'll sip green tea while that lyric waits. And I'll even consider some downward dog.