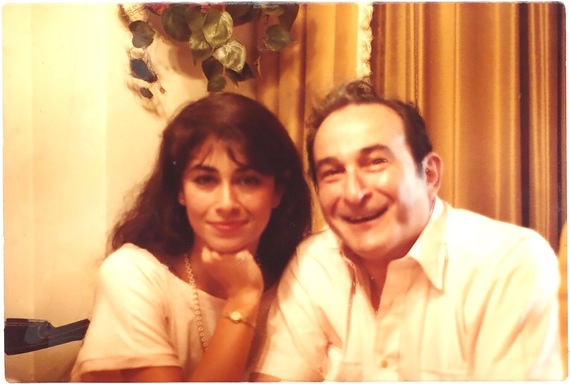 Since you've been gone the world has gone a little mad. I miss you so, but there are things I'm happy you didn't have to witness.

In 2001, terrorists flew a plane into the World Trade Center and both buildings crumbled to pieces. We watched it in real time on TV. Thousands of people lost their lives. It was horrible, Daddy. I'm so glad you didn't have to see that.

In 2012 this crazy kid stormed into an elementary school and shot 20 little children. Can you imagine their parents' heartbreak? You're lucky you didn't have to.

I also take heart in knowing you didn't have to read about the guy who shot and killed an unarmed black teenager in Florida. And a few days ago fifty people from the LGBT community (an acronym we now use for Lesbians, Gays, Bisexual and Transgender), were gunned down at a nightclub and a young girl was a fatally shot signing autographs after her concert. I knew this girl, Daddy. I can't stop thinking about her.

Then there were these two brothers who left a bomb in a knapsack at the Boston marathon. They were part of this extremist militant group called ISIS. I'll spare you the details of what they've been up to.

What I'm trying to say is...as much as I wish you were still here I take comfort in knowing you escaped some very painful times. At least that's what I tell myself when I want to feel better about missing you so much.

On a lighter note (or maybe not), the political climate is a circus. One of the big issues during the presidential debates this year was whose penis was larger. Can you imagine Kennedy and Nixon having that discussion?

Speaking of politics, I know you'll smile when I tell you that in 2008 we elected our first African American POTUS. And this year, there was a Jew running and he was taken very seriously. The presumptive Democratic nominee however, is Hillary Clinton. First woman ever to be nominated for President. That's kinda cool, whether you're with her or not, right?

I know you'd have some opinions about the Republican nominee, Donald Trump. You heard me right. Donald Trump. Things are very interesting down here.

Oh, and Daddy...we have these devices called iPhones. They've become the hub of our existence. They remember everything for us. (Maybe that's why I can't remember anything myself.) We don't need maps or photo albums or alarm clocks. They tell us how to go places, precisely when we'll get there and if we'll run into a pot hole along the way. I kid you not.

You know what else iPhones do? They send electronic text messages. This is a convenient way to let someone know if you'll be late or remind your hubby to pick up milk on the way home. But people are also using it for other reasons. A Congressman (named Weiner)!!! texted pictures of his privates to a stranger. He got busted so he had to step down from office. But then he ran for Mayor. I'm telling you, Daddy. I can't make this stuff up.

Oh, and Daddy...I've had some hit songs and received a Grammy nomination. I wrote a book that's actually in stores. How I wish I could share all of it with you. We could do that via Facebook. What? Oh, Facebook is this social media platform on the Internet. What? Oh, the Internet is this information superhighway on our computers. We can keep in touch with friends and family all over the world--see their children, their pets, their haircuts, their meals. You could have seen pictures of Layla every day, Daddy. Who's Layla? Oh Daddy. She's my daughter. She arrived three years after you left. You would have adored her. She's the one thing I'll never get over you not seeing.

You could have talked to her over FaceTime...What? Oh, FaceTime is a phone call where...Oh never mind, Daddy. It's not important.

Happy Father's Day. I love you.

Give Mommy a kiss.