I am a tee-ball coach. 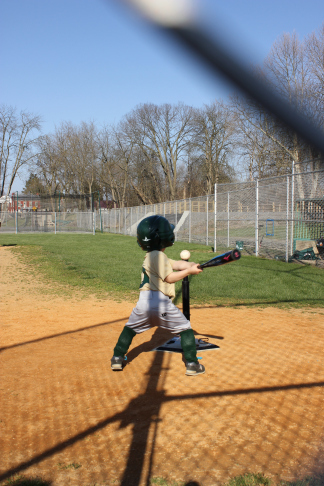 Corralling a field of four-year-old boys and girls into something resembling a baseball team; prepping the batting line-up while prying players off the dugout fence; directing runners around the bases and finally locating the missing player who ran from second base to the pitcher's mound and is now sitting on the mound while the other team surrounds him quizzically.

The job is mainly about listening to the sound of your own voice as it drones over and over again, raising over the din of moms, dads, nanas and pappys cheering in the stands:

"We don't play with the dirt."

"Turn around before you get hit in the back of the head with the ball."

"Yes, I see that butterfly."

"No, you can't play on the playground -- we're in the middle of the game."

"Yes, you can get a drink when we're next at bat."

"There's no whining in baseball."

"There's no whining in baseball!"

"Have I mentioned there is no whining in baseball?!"*

*NOTE: All of the above comments were from my own child and all took place within the first 15 minutes of the game.

I never realized how complicated the game of baseball is until I had to explain it to a pre-schooler who doesn't know his infield from his outfield. The batter hits and you get the ball and throw it to first. Or run to first. Or tag the runner. Unless there is a runner on first already, and then you can go to second. But if there is a runner on second only, you should go to first. Unless the ball is foul, then it doesn't count. Or... You know what? Never mind.

In reality, the game of tee-ball consists of two innings that take almost a full hour. It's having an entire team stampede towards the batted ball as it trickles inches past the tee, like a herd of wild rhinos on the plains. It's like a wild Easter egg hunt, a free-for-all where the player who actually captures the ground ball holds the prize over their head, grinning proudly while the runner rounds the bases (or perhaps chooses to sit on the pitcher's mound instead).

There are no time-outs, just continuous pauses in the action to tie loose laces, locate missing gloves, wipe noses and scuttle to and from the infamous port-a-potty or "giant hole that's like peeing in the ground!"

It's 60 minutes that can feel like four days; two innings that feel like ten. And though 90 percent of it is spent re-focusing four-year-olds who would rather be picking dandelions in the outfield then know what to do with a ground ball, it's still a lot of fun. 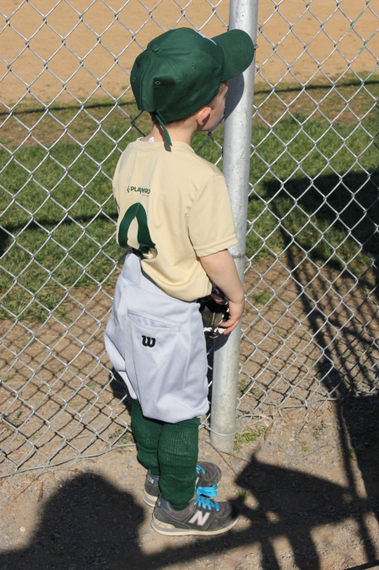 There is nothing like watching a kid finally smack a solid hit off the tee. The amazed look on their face, standing there watching the ball sail away as everyone else yells "RUN! You have to RUN!" The puffed-up pride of a player who chases and eventually captures that elusive ball. The high-fives as they round third and jump on home plate. The cheers after they score a run for the team (even if we never actually keep score -- heck, we don't even keep track of our outs).

Hearing little voices holler "Hi, Coach!" as they run on to the field or smile shyly after you teach something new. Their excitement to show you how they can finally throw overhand or how fast they can run to first base... I have to say, it's pretty cool.

Even though I am more likely to hear "YESSSS, I KNOW that already!" when attempting to demonstrate, explain or just about do ANYTHING with my own child on the field, it's still a neat and rewarding experience. I don't mind stopping the game to tie sneakers or trot along with a player from the other team who doesn't want to round the bases alone.

I don't mind that innings start late because kids are waving to their parents in the stands and asking for "just one more bite" of their granola bar through the chain-link fence. I don't mind the chaos, the confusion or the constant chatter. It's all part of the tee-ball game and as coach, I wouldn't have it any other way.

More:
Baseball teamworkParenting Parentsparent-coach
Newsletter Sign Up
Raise the kind of person you'd like to know
Subscribe to our parenting newsletter.
Successfully Subscribed!
Realness delivered to your inbox