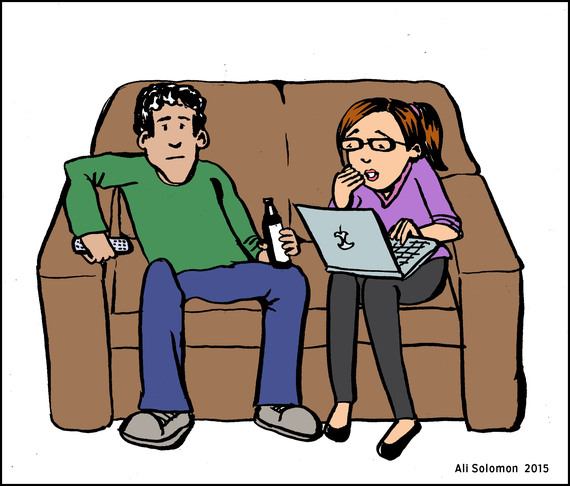 I'm completely obsessed with Game of Thrones. I spend my lunch break discussing key plot points with co-workers; I text friends about the horrifying deaths, the shocking twists, the gross romances.

What no one knows is that I have not watched a single episode.

Oh, I tried. I sat down and made it through approximately five minutes before someone was beheaded and a child was almost killed, and I quickly turned off the TV and dry-heaved. What kind of monster can watch this inhumanity week after week, season after season? Yet, I wanted to know what happened to that child, so I did what anyone would do: I Googled "Game of Thrones episode ending spoilers."

I have my reasons for not watching certain shows. Some are unavailable; it seems I need a bevy of streaming and cable outlets in order to cover all my bases. Some shows are too visceral for me (I'm looking at you, Sons of Anarchy, American Horror Story, Penny Dreadful, and all your little serial killer friends). Some have too much backlog (134 hour-long episodes of The Good Wife? Not gonna happen). Many are too dark and dismal for my sunny sensibilities (Homeland, Scandal). And then there's Grey's Anatomy.

But regardless, I'm still curious: What's the deal with the Red Wedding? What was Walter White's ultimate fate? Who's aged the worst on Wet Hot American Summer? Does Peggy ever find love? Who actually gets away with murder (I hope it's Viola Davis)?

Thanks to the Internet, I can read the recaps of four different shows in the time it would take me to watch one single episode.

The biggest problem is that television today is good. Very very good. At least according to a Rolling Stone article I read. And while creators are finally getting the hint and making limited-run series, shorter seasons, and finite wrap dates, there's still entirely too much to catch up on. In my workplace alone, people watch all the Emmy-baiting heavy-hitters, along with the bottom-feeding reality dreck. To complicate matters, two friends have started in on The Mary Tyler Moore Show, opening up a whole new Golden Age to binge-watch. I would need to consume no fewer than twenty hours of television a day in order to stay on top of the dinner party conversations.

And I really want to participate in the dinner party conversations.

There's something satisfying about belonging to a community of viewers (most of whom are not viewing Community), who often have little in common except a hatred of Iris on The Flash or a membership on Team Eric/Team Bill. While watching television can be a solitary activity, discourse has become a mandatory extension of the viewing process.

Luckily there are CliffsNotes available for my non-viewing pleasure. Seconds after an episode begins airing, the message boards on imdb.com flood with questions, predictions, and of course, trolls. Sites like previously.tv and vulture.com offer minute-by-minute analysis on anything from reality to awards shows. In the time it takes my bagel to toast, tweets fill me in on who was eliminated in last night's episode of MasterChef, national newspapers recap Fargo for me, and a personal blog I stumbled upon prattles on about Pretty Little Liars in such detail that I feel like I've actually watched it. In fact, when I discuss the reveal of "A" with my tween cousin, I don't feel like a fraud at all.

Television is an inherently visual medium, but how important is it to actually watch it? Critics of my viewing methodology insist that I am missing out on the essence of television. I don't deny that I have transformed the experience from a visual to a literary one. But the same way in which the reader of a novel can construct a visual narrative, I too can mentally recreate the television world. So I miss out on Kerry Washington's killer wardrobe, Claire Dane's superb ugly-crying, or the gorgeous scenery of Ice Road Truckers. I know major plot details, character arcs, dialogue, twists, and can fill in the blanks with accompanying media images (while reading the in-depth critical companion piece).

Most importantly, I remain up-to-date about yesterday's entertainment and no one is the wiser.

In my heart, I know I will never make it through all 125 episodes of Parks and Recreation, or retro-watch those classics The Wire or Friday Night Lights that everyone says will enrich my life. But I will read about them; these shows are so enmeshed in our pop-cultural landscape that any information is better than none. After all, people who have never seen Casablanca can quote its dialogue and understand its influence.

As for Game of Thrones: if skimming the recaps becomes too arduous, I suppose I could always just read the books.