Confidence in America’s public schools has hit a record low, with only 29 percent of respondents expressing “a great deal” or “quite a lot” of confidence in them, according to results from a recent Gallup poll.

The number is down 5 percentage points from last year, and represents a 4 percent decrease from the previous low of 33 percent in 2007 and 2008.

Public schools rank eighth -- tied with the criminal justice system -- among 16 confidence categories that Gallup studies. Its position is unchanged from last year, and once again follows the presidency and U.S. Supreme Court, and ranks ahead of newspapers. 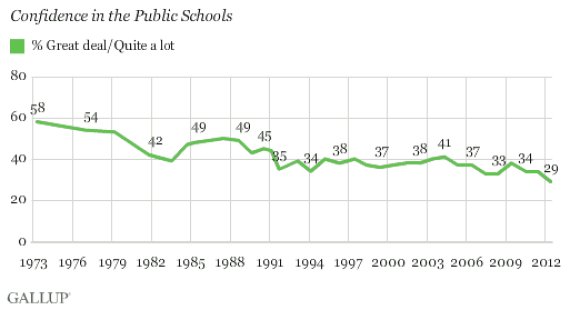 Out of all the categories, the sharpest declines were for public schools, television news and organized religion. All three are at least 10 points lower than their historical average ratings, which are based on all measurements of each institution since 1973.

Confidence in public schools remained fairly consistent across gender and age group, according to Gallup's data. Twenty-six percent of white respondents indicated that they had a “a great deal” or “quite a lot” of confidence in the institution, compared to 36 percent of non-whites.

Those surveyed who graduated college were as confident in the public school system as those with a high school diploma or less. Respondents who possessed some college education but did not earn a degree were about 10 points less optimistic.

Of those who self-identified as Democrats, 36 percent expressed confidence in America’s school system, while only 21 percent of Republicans did so.

Gallup surveyed a random sample of 1,004 adults aged 18 and older representing all 50 states and the District of Columbia.

This faltering confidence in America’s public school system follows a year of budget cuts across the country that have forced the elimination of jobs in the education sector, student transportation and after-school programs. Parents nationwide have also been vocal in expressing their frustration with excessive standardized testing and “teaching to the test.”