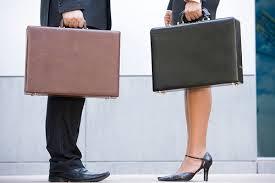 A widely accepted justification for the glass ceiling is a difference in confidence levels between men and women. In 2014, a study from Washington University of St. Louis reported that women perform better in less competitive work environments. Today, more than 70 years since the world's first female head of state took office, this news sounds regressive and antiquated at the very least.

Women have spent years catching up in academia and now outrank men globally in higher education enrollment and graduation rates. In the United States, women earn 60 percent of all undergraduate degrees and account for 52 percent of the workforce. This increase can be seen across the board, including in countries like Saudi Arabia, where women make up 51 percent of the total college enrollment but yet do not have the freedom to operate a vehicle alone. Despite these widespread gains, we are still vastly underrepresented as leaders and disproportionately compensated for our positions.

For 17 years, I have worked directly with many ambitious and resourceful women who are anything but apathetic towards their careers. These women have faced challenges and come out on other side exuding both professional initiative and overwhelming personal aspiration to move forward for themselves and their families.

So why are so many strong women perceived as timid in the workplace? Just like any professional skill, confidence is learned and therefore can be influenced by our surroundings. Women's 'soft' approach to career advancement can be attributed, in large part, to a lack of structural support in the workplace. Since many women serve as primary caregivers to children as well as the sick and elderly in their families, they may endure periods of time out from their careers, which forces them to work twice as hard to get the same distance as their male counterparts. Even without these breaks in career momentum, limited institutional support including inadequate maternal policies and inflexible work schedules make it hard for women to stay competitive and hinder their upward mobility. The unfortunate consequences can be a loss of self-confidence and lowered expectations in order to meet the demands of splitting time and energy between professional and family life.

However, there is some progress on the institutional level that suggests corporate mindsets are shifting towards being more inclusive of women. The British based phone company Vodafone recently announced it will be instituting a maternity policy at the end of 2015 that will set a precedent for businesses worldwide. The new policy will include 16 weeks of fully-paid leave. In addition, returning employees will be able to work 30-hour weeks for the first six months and still receive their full compensation. This will dramatically increase benefits in several of the 30 countries where Vodafone operates, especially the United States. As the only developed country without sanctioned minimums for maternity leave, the United States falls behind less progressive nations like India, who provide 84 days of paid leave for their women.

Offering structural support to working women does not just benefit the individual; it also bolsters the economy. Many companies would actually save money by including paid leave for their female employees. The total cost of replacing women who leave the workforce to start a family often outweighs the price of increasing benefits to retain a current employee. Providing more agency incentives like those at Vodafone would boost self-esteem, making women feel more valued in their positions and ultimately encouraging their return to the workforce.

Though enhanced work-life policies make it easier for women to access the workforce, it's not the only change that needs to be made. Some countries, like Spain, have even implemented equity laws that require a certain percentage of female candidates be represented in each electoral race but still have yet to appoint a female leader. To generate actual change, advancements on the institutional level must also be coupled with a psychological shift.

The belief that women are not strong or effective leaders persists despite the evidence. A study from Pepperdine University reported Fortune 500 companies who more frequently promoted females boasted higher profits and outperformed those at the industry standard. In order to change this perception of women's professional worth we need more visible female leaders in the workplace. Historically, women were held back from attaining senior positions while today we are challenged to find those mentor relationships that play a vital role in career advancement. The perpetuation of prescribed gender roles ensure women with powerful careers are labeled as "exceptions," rather than role models. Much like maternity provisions, mentorship is seldom integrated into a company's policies, putting the burden on women to fill that role externally.

At Dress for Success we work to close this gap by creating a global network of women helping women. Our programs thrive on mentor relationships that educate and empower women to make changes in their own lives and share their experiences with other women. Within this culture we can cultivate a change in perspective that will normalize female leaders in our workforce and strengthen professional networks for all women.

Until society develops larger internal framework to accommodate all women in the workforce, we would benefit from looking to each other for mentorship and offering the support that is lacking on the institutional level. If properly supported in our careers, we would no longer perceive a lack of confidence as an obstacle for women in the workforce.

Regardless of gender, our confidence is influenced both internally and externally and together reinforces our overall self-esteem. If we begin to view the issue of career confidence in its structural context rather than as an intrinsic male or female trait, we can identify the holes in our current system and begin to offer better supplemental support to working women. Broadening the scope of the conversation will allow women to realize their full professional potential, open the door to more career opportunities and create a stronger and more lucrative workforce worldwide.