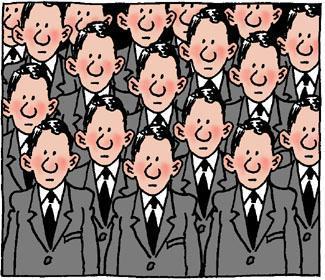 At the end of a recent workshop, a young man pulled me aside. He had used my handout, showing the masculine-feminine continuum) in several dimensions, to observe his own style. (You can download the profile here.) He scored himself on the feminine side of the continuum in several areas. He asked me if my advice to him was the same as it is to women: adopt the most effective style (masculine or feminine) for the particular situation. Yes, I told him. "Read the situation and mindfully shift your style along the continuum."

It's just a fact. The business world was created by and for men. Women got there in large numbers only in the last few decades. So naturally workplace behaviors tend toward the masculine. Naturally, traditional definitions of leadership are heavy on masculine qualities. Leaders are decisive, direct, firm, tough and completive. Only recently have theories of leadership embraced more feminine qualities. Note the sub-title to John Gerzema's book The Athena Doctrine, "How Women (and the Men who Think Like Them) Will Rule the Future."

It is natural for people to observe the behaviors of those most successful (those at the top) - and model their own style accordingly. And still today most of those at the top are male (and white). According to research by the Stanford School of Business, women are rewarded in business by demonstrating certain masculine behaviors - being confident, dominant, assertive and competitive (if they can "self-monitor" and move back toward the feminine side of the masculine-feminine continuum).

Men, too, respond this way. Many men naturally have masculine ways of thinking, acting and leading. But men and women both operate all along the masculine-feminine continuum. Men, like the one who asked me the question, may more naturally operate at the feminine end of the continuum. They may, for example, speak more humbly, influence by persuading, exhibit more collaboration than competitiveness, or make decisions in a more feminine way. Men, even more than women, may play down their feminine strengths. They may fear being seen as unmanly (or, worse, a sissy).

Fritjof Capra in The Tao of Physics, referred to a cultural imbalance in the Eastern terms, yin and yang. Capra argued that this one-sided development is bad for society and pointed to the importance of regaining a balance between the masculine and feminine sides of human nature. That was in 1975. Four decades later, we remain imbalanced.

I don't want women to become "men" in order to succeed. And I don't want men becoming more masculine in order to fit in and feel respected. I want men and women to discover the strengths of feminine as well as masculine ways of working and leading. And I want the workplace to honor and leverage both. We know that gender diversity is correlated with greater financial results. Gender balance makes it more likely there will be a balance of masculine and feminine approaches. If we all become masculine - or more masculine - we'll never see that balance.

Do you find the need to hone your masculine strengths at work? Do you fully use your feminine strengths?