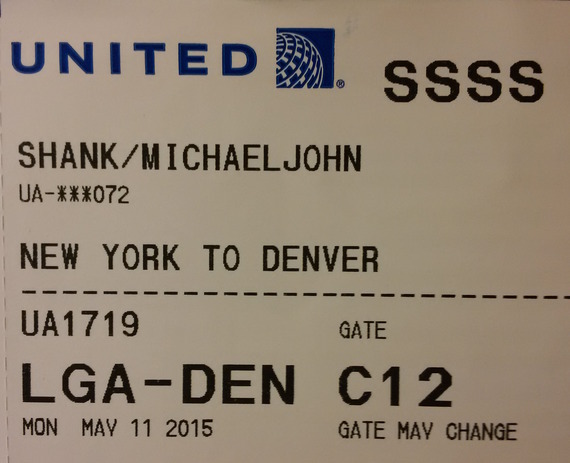 It's official. The Department of Homeland Security has placed me on a travel watch list. Every time I travel abroad, I now have "SSSS", which stands for Secondary Security Screen Selection, on my boarding documents. That means I get an extra rigorous full-body screening, thorough examination of luggage and detailed questioning of travel plans past and present.

I'm not alone, of course, and join the tens of thousands of innocents caught in the Transportation Security Administration web. What's most interesting to me now, however, is how I got there. I've never shied away from travel to countries that are on the United States do-not-travel list. Nor have I shied away from calling out the Departments of State, Homeland Security and Defense for misdeeds, miscalculations or misguided policies.

Nor will I shy away now. I want to publicly record that which might've put me on watch list, just in case the Department of Homeland Security decides to ramp up their crackdown and keep me stateside. It's time to push back. Ideally, I'd like to have an easier commute abroad, since I travel so frequently for work, and shedding the SSSS identity would help. But perhaps this SSSS scarlet lettering is appropriate for my learning, experiencing the tedious burden that is commonplace for many of my friends and colleagues throughout the world. In any case, here's a take on what DHS might've been worried about:

If you were to look at my past and present passports, you'd see a host of nations stamped on it that the White House has historically considered an adversary, an "axis of evil" state, or a security threat. Whether it's been my work in Yemen, Somalia, Syria, Iran, Cuba, Afghanistan, Turkey or Pakistan (where people have overwhelmingly and enthusiastically welcomed me into their homes), my passport has landed me, post-trip, in a questioning facility for hours after returning to JFK or Dulles Airports. Needless to say, I'm often the only white guy in the room.

This does not deter me. I intend to visit or work in every nation-state that the State Department has sanctioned -- including North Korea, Iraq and Libya, where I haven't yet traveled -- because I believe strongly in dialoguing with, not dismissing or denigrating, all stakeholders in any violent conflict (not unlike when President Kennedy talked with Russia and President Nixon talked with China at the height of war rhetoric). As long as adversaries are prohibited from the discussion table, they will continue to rabble rouse -- causing havoc and resorting to violence to achieve political power and purposes -- until their grievances are addressed and basic needs met. This is the case with every conflict.

What's most interesting about DHS scrutinizing my trips to these adversarial states is that my work is often with the State Department, Members of Congress, Members of Parliament, the United Nations or other legitimate state agency or actor. When going to Turkey this year, for example, my delegation included current and former Members of the US Congress. Despite this fact, DHS agents thoroughly examined me, pressing me to exhibit my trip agenda, showcase participants and funders (which was the German Social Democratic Party), and more. It's ironic that the DHS is making it more difficult for people to do their jobs for and with the U.S. government, whether it's in diplomatic engagement, economic development, or human security assessment. It's a counterproductive move by DHS and ultimately ends up costing the American taxpayers more.

DHS seems unfazed by legitimacy, however. My trip-related report outs are for very legitimate and often conservative news outlets. I deliberately choose to write for mainstream or center-right media because I believe strongly that the general public, who is rarely traveling to these regions or countries, needs to be engaged and offered an alternative perspective to U.S. administration policy and political rhetoric. My Yemen and Somalia trip analyses, for example, ran in the conservative National Review, as well as in USA Today, CNN, FOX, Daily Beast and many more. Other examples include my Turkey trip analysis, which ran in The Guardian and my Afghanistan trip analysis, which ran in the conservative Washington Times.

The Department of Homeland Security knows that I'm very public about my work, writing regularly for US News and World Report, Washington Post, Politico, and National Journal, coauthoring constantly with myriad Members of Congress, and populating Hill rags -- like Roll Call and The Hill -- in Washington DC. Perhaps that's why the DHS is so concerned -- I'm too public. What should console them, however, is that my desire to remain relevant within the policy and media space is strong. I've considered in the past, and still considering now, a run for political office. I certainly wouldn't jeopardize that potential path with a less-than-licit political play. But will I quiet or refrain from calling out the U.S. government? Absolutely not.

But beyond the passport, lies a potential personality issue. Jeh Johnson, who is now President Barack Obama's Secretary at the U.S. Department of Homeland Security, was once the Pentagon's top lawyer. As the Department of Defense's former general counsel, Jeh gave a high profile speech wherein he suggested that Martin Luther King Jr., if he were alive today, would support the Pentagon's wars in Iraq and Afghanistan. At the time, I was working as a Senior Policy Advisor for U.S. Congressman Michael Honda, who was chair of the Congressional Progressive Caucus's Afghanistan Taskforce. We wrote up a response, sharply criticizing the Pentagon official's assertion, which I then emailed over to Jeh and distributed to press. Needless to say, the Pentagon's general counsel wasn't pleased.

The Congressman and I, just a few months prior, were taking the Pentagon, and specifically the Special Inspector General for Afghanistan Reconstruction (SIGAR), to task for war profiteering and lack of due diligence in oversight and accountability of taxpayers dollars in the war zone. Our critique landed me, as a congressional staffer, in the political crosshairs of upset ex-FBI agents (then assigned to SIGAR) and industry contractors. Threatening conversations were not uncommon in House rooms on Capitol Hill, and, fortunately, I knew the war issues well and stood on par, in stature, with security officials who seemed keen to intimidate. The good news here is that SIGAR has since cleaned up its act. The bad news is that perhaps the Pentagon's top lawyer has carried a grudge on his way over to Homeland Security.

But passports and grudges don't have the staying power that a more systematic agenda might. Has Homeland Security flagged American citizens, like Martin Luther King Jr., who are stridently counter-cultural? If MLK were alive today, I'm pretty sure that the DHS would have him, at minimum, on a SSSS watch list and more likely on the stricter do-not-fly list. Coming from a rich heritage of not-of-this-world, tax-resisting, Jesus-revering Amish and Mennonite preachers and pastors, I was born and raised to think and live outside the box, to challenge the status quo, and to push back against policies that disenfranchise and marginalize the many and benefit the few, and U.S. policy fits squarely within these sights.

Following in Jesus' footsteps, I started upsetting temple tables early. When I was a teenager, I filed a form with the church identifying as a conscientious objector. There was no way I was going to serve in a war, ever. Imprison me instead. That was probably the first flag for the U.S. government. Ever since, I've firmly believed in the power of nonviolence -- at any level of society, from structural to physical - and teach at a university that bucks the traditional Washington DC international relations theory and focuses instead on preventing violence. My mentors are those nonviolent leaders who were killed or jailed for their protest -- from Khan Abdul Ghaffar Khan in Pakistan, who spent a third of his life in jail, to Mohandas Gandhi and Martin Luther King, the latter of which undoubtedly died for his Vietnam War protestations.

The irony of contemporary American reverence for these leaders is that if they were alive and operating today, Homeland Security, the Federal Bureau of Investigation and the Central Intelligence Agency would be all over them, tracking and thwarting every move. King's call-out of the "giant triplets" of militarism, racism and economic exploitation, the latter of which he also labeled as extreme materialism, are as insidiously pervasive and problematic today as they were then and would easily ostracize him from mainstream discourse. Robert F. Kennedy also understood the perils of preaching, yet tackled the "menace of violence" in America without fear. Delivered immediately after MLK's death, his assessment of violence in society was as revolutionary in the 1960s as it is today.

King and Kennedy are quintessentially American in my opinion, thought they don't fit neatly into the U.S. government's current paradigm of patriotic virtue. Yet, this is exactly what America should be about: A place where questioning and critique is commonplace, where accountability and oversight is not outlier behavior, and where the promotion of ideals that can be found on the federal memorials of President Franklin Delano Roosevelt and Martin Luther King Jr. are encouraged, not excoriated. This is the kind of homeland I want to live in. Secure that, DHS.