Over the past 4 years, 42 Churches, mosques and monasteries were vandalized, attacked or torched in the Holy Land. A very narrow section of the Orthodox Zionist world has engaged in what is in fact religious terrorism. Initially a form of political protest, that channeled hatred of the religious other as part of its political message, it has taken an ugly turn and become an outright attack on other religions. Very recently, one of Israel's most celebrated churches, at the shores of the sea of Galilee, the Tabgha Church, where the miracle of multiplication of fish and loaves is commemorated, was torched. Not only was the damage more extensive than any other instance of arson, it was also a watershed point in terms of the reasoning provided. Previously, accompanying graffiti was political. This time, a verse from the Jewish prayers was quoted, expressing the hope that all idols will perish, leaving God alone as the only true reality. The arsonists sprayed this verse on the walls of the monastery, thereby sharing with us their religious worldview, that identifies Christianity with idolatry and that seems to empower them to action, beyond future oriented hope. 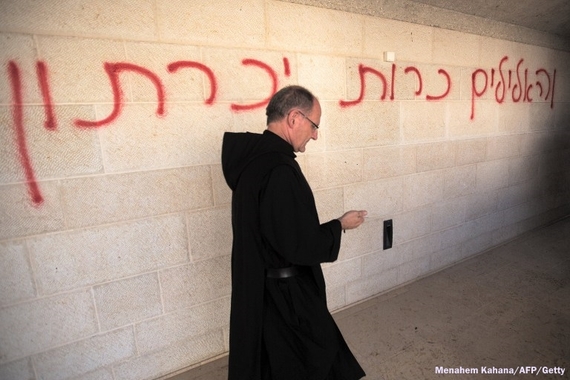 That this theology is wrong almost goes without saying. For centuries Jews have been able to distinguish between biblical religions and their Christian neighbors. They have also been able to keep apart future hopes and present-day actions. The arson was denounced by religious and political officialdom, as have been all prior attacks on Churches and mosques. And yet, we witness one attack after another, leaving the Christian community increasingly insecure. For all the condemnation that such acts draw, the acts of vandalism and terror draw on deep seated religious views and it is these that must be tackled if we seek to bring about a healing to this malady.

Stepping up hostility and making it explicitly religious calls for an appropriate response, one that would address the root causes, and not simply condemn its manifestations. The challenge, then, is how to deliver a message about other religions that would at the very least force open the discussion of the status of other religions and in the best case help transform attitudes for the better. This challenge was met by an original initiative, launched following the torching of the Tabgha Church. The idea was simple. It was inspired by a teaching of the Hassidic master, Rabbi Nachman of Breslav - if you believe you can spoil, believe you can also repair. Translated into the context of recent hostilities, it led to an effort for Jewish support for rebuilding what arsonists had torched. If in the name of Judaism one could destroy, in the name of Judaism one should also rebuild. This simple recognition led to a crowdfunding initiative to rebuild what was destroyed in the fire. Significantly, the Church was not destroyed, but rather its courtyard, where Benedictine hospitality and interreligious encounters take place. Rebuilding what was destroyed is thus physically and symbolically rebuilding friendship. 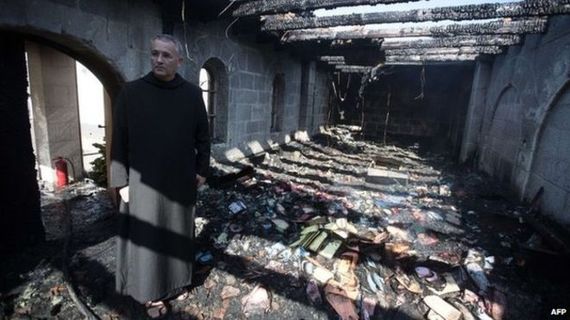 The simple initiative is, for the Orthodox Jewish community from which the arsonists came, very counter-intuitive, as the view of Christianity as idolatry is rather prevalent. If so, how could one support the rebuilding of a Church, or even of the Church complex. For the initiative to take hold within the core community to which it was addressed, rabbinic support was required. In contemporary Jewish (Israeli) society there is a general ignorance not only of Christianity but also of the range of possible attitudes to Christianity. Throughout the ages many rabbinic authorities, possibly most, recognized Christianity as monotheistic and legitimate. For this message to penetrate to a broader public a number of leading rabbis were enlisted in support of the "Restoring Friendship" initiative. The group was high profile enough to warrant an invitation to Knesset speaker Yuli Edelstein's office, in what was the launch of the crowdfunding initiative. A public show by a representative Israeli figure and a group of leading rabbis thus accompanied a campaign that sought to deliver an educational message, by means of a fundraising campaign. Simply put, when we reach into our pockets, one knows we are serious and listens to our message. No less important, taking this public stance has opened a discussion of a theological nature within certain circles that had previously been closed to such a discussion. The campaign thereby succeeded in delivering a message to the world at large, even as it revisited the religious and theological roots of violence within. 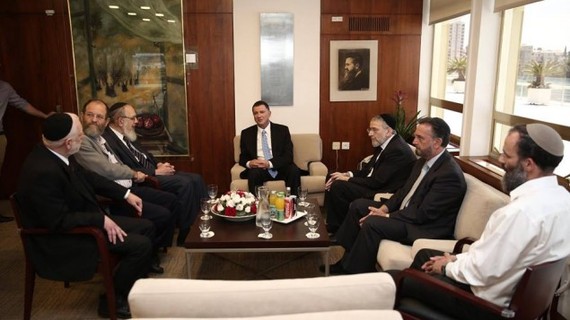 The initiative turns out to have been important for all those who felt the need to affirm a different kind of Judaism than that of the arsonists. It has become a vote in favor of a peace-seeking Judaism, that affirms and recognizes others, a Judaism that recognizes that without proper treatment of minorities, it loses the basis for its own existence. Not only individuals but also organizations have been joining the initiative, and not only in Israel but also in other countries. The American Jewish Committee is one organization to has recently joined the initiative. Creative thinking, proactive action and the wise employment of technology in the service of educational goals have led to one of the most original campaigns in the history of interreligious relations anywhere, certainly in the Holy Land.

For those who wish to learn more about the campaign and to support it, as it runs over the month of July, please click here.