A mammoth sculpture of the ancient philosopher Confucius was unveiled this week off one side of the vast plaza. It's a jarring juxtaposition for a square the ruling Communist Party treats as politically hallowed ground: a mausoleum holding revolutionary leader Mao Zedong's body sits in the middle and his giant portrait hangs at one end.

Placing the statue at China's political heart is the authoritarian government's most visible endorsement yet of the 2,500-year-old sage and, selectively, his teachings.

Confucius is enjoying a revival, in books and films, on TV and in classrooms. His message of harmonious social order and deference to authority is unthreatening to the party, while his emphasis on ethics resonates among Chinese coping with fast-paced social change on the back of torrid economic growth. 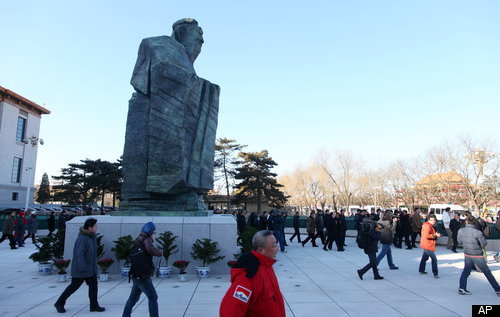 The government is increasingly marshaling his popularity to bolster national identity. "The rise of a big country requires a cultural foundation, and Chinese culture upholds the spirit of harmony," said Wu Weishan, the sculptor, who has made more than 200 statues of the philosopher. "The essential thoughts of Confucius are love, kindness, wisdom and generosity. And peace and prosperity are what the people are striving for."

The 31-foot (9.5-meter) bronze sculpture depicts a robed Confucius with a serious expression and sits on the east side of the square, facing in the direction of Mao's portrait and amid the bustle of Beijing. Chinese tourists busily snapped photos and agreed that Confucius' teachings bear a message for modern China, where "money worship" and consumerism feel like national preoccupations. 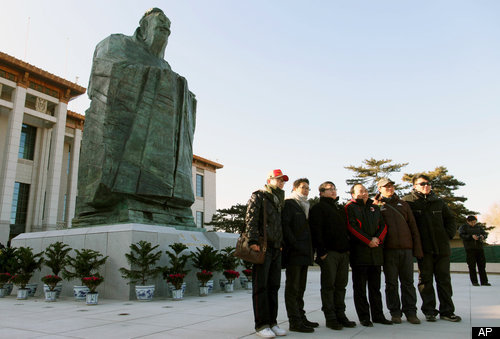 "Confucianism has been governing the lives and ethics of Chinese for thousands of years," said 25-year-old engineer Cui Xiaozhan, on a business trip from the eastern city of Qingdao. "We should study it. But everyone is too busy and tired."

Confucius laid down a code of ethics that was adopted as a quasi-religious national philosophy of governance and personal behavior. His teachings emphasized duty to family, respect for learning, virtuous behavior and obedience of individuals to the state.

At the center of Chinese civilization for nearly two millennia, Confucianism suffered under Mao, who spent much of his rule destroying traditional culture. "Criticizing Confucius" -- as a symbol of the old society believed to be holding China back -- was one of Mao's campaigns. 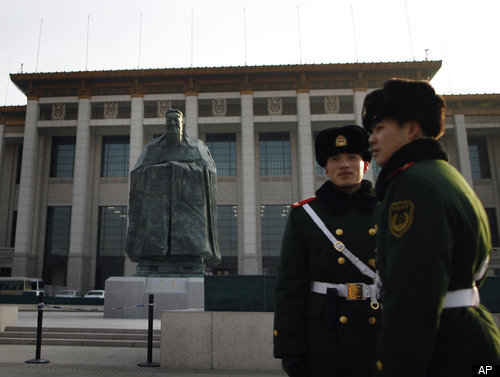 "Now the party leaders have resurrected Confucius and practically put Mao and Confucius side by side. Mao must be turning in his grave," said Minxin Pei, a China expert at Claremont McKenna College.

But Mao has been dead for 35 years. His political heirs have repudiated his radical policies, embraced capitalism and reinterpreted him as a founding-father figure who spearheaded the revolution that ultimately led to China's fantastic current rise.

When student protesters erected a Statue of Liberty-like "Goddess of Democracy" on the square in 1989, tanks toppled it in the violent crushing of the Tiananmen democracy movement.

Later, Chinese leaders largely turned to nationalism to fill the void after the collapse of the Communist bloc in Europe. Over the past decade, interest in Confucius has grown among parents, educators, government officials and intellectuals.

Books about his teachings are best-sellers. A movie about Confucius last year featured Chow Yun-fat, a veteran actor known for starring in stylish gangster thrillers.

The flip side of economic development is "increased individualism and increased sense of competition and anxiety," said Daniel A. Bell, a philosophy professor at Tsinghua University and author of "China's New Confucianism." "There's a need for ethics and morals and promoting social responsibility."

For the government, there's appeal in a philosophy that preaches harmony at a time when a yawning rich-poor gap and anger at corruption have fueled instability and when unbridled nationalism has boiled over into raucous protests in recent years.

Top leaders "certainly realize the absence of a value system," said Cheng Li, an expert on Chinese politics at the Brookings Institution. "It's a desperate search for ideology, for a new value system."

So far, the government hasn't made any overt proclamations pushing Confucianism, though one of its favorite recent slogans is "harmonious society." It has backed the creation of hundreds of Confucius Institutes to spread Chinese language and culture abroad. A proposal to amend the law on protecting the rights of the elderly would make clearer that children have the duty to visit and care for their aged parents.

What's next? "You will see some top leaders more explicitly talking about reinforcing, promoting ... Confucian values," Li said. "It's such a big basket you can select whatever you want. They will ask people to behave appropriately, not too aggressive, not use violence and don't pursue revolution."