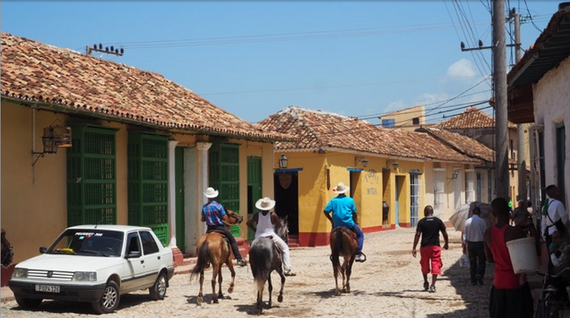 I put down my camera and remind myself that this was about watching, learning and soaking up all that Cuba could offer.

Cuba is a hard one. This is one of the times in your life when photos can NOT CAPTURE WHAT you see. From the broken down but weirdly reconstructed Havana, to the campos of viñales that look like they're from another world, and back to Trinidad, a time warped little village of 50,000. It's a country full of history, stories, families and personalities that have all been impacted in some way or another by the 57 year long revolution.

When I started to think about what to write on my time in Cuba, it was hard to compose my thoughts without sounding like a privileged westerner. Much the same with the rest of the travellers here, I am trying to really understand just how communism has impacted and is still impacting the people of Cuba. But, as the trusty little Lonely Planet guide told us "don't come here expecting to understand, just watch and enjoy" and so it's primarily that that I've been trying to do for the last two weeks.

When we landed in Cuba the first experience of the embargoes with the US was felt right away: My cards are MasterCard, meaning, they won't work at an ATM! How stupid of me to not think about that. So it was with a very awkward explanation (one that could have been ever more awkward were it not for our ability to speak Spanish) that we explained what happened to our taxi driver and asked for his forgiveness. Luckily for us, little old Cuba had her tricks, and so it was off to wait in the sweltering heat in a line of 50 people for the Casa de cambio to try our luck there.

Our first few days were spent sweating our way around Havana. This place is crazy, incredible, dilapidated and destroyed yet is beautifully reconstructing itself one block at a time. The massive colonial buildings that would have originally belonged to one family and then were divided up floor by floor by the revolution and handed to the poor, are a twisting turning maze of high ceiling rooms. Stairs that are almost vertical and rooms filled with items from anywhere and everywhere in the world. Of course, the majority of these particular buildings if not owned by someone are crumbling inside and sit more like skeletons trying to maintain the facade of the beautiful site they once used to be.

But for some reason, the peeling, blistering paint and old wooden doorways perfectly match the people, the 1950 Chevrolets and the culture that is exuded on every corner. It needs to be put down to the indefatigable nature of Havana; the city and its people. The fact that they've withstood 57 long years of revolutionary history and only in the past few years has the government slowly been adapting liberalist ideals, says a lot about the patience and attitudes of the Cuban society.
cuba

This is a country that, after all, has a 98% literacy rate, the highest of all Latin American countries, thanks to their free education. But when you consider that it wasn't until 2012 that Cubans could freely leave their country, you start to wonder whether the benefits of a socialist Country (free education and health) are really worth it when you can't experience the outside world. And again, this may not be in the interest of all, but for me, travelling and understanding the world is one of the most important parts of education.

Driving from Havana to Viñales and Viñales to Trinidad was a mixture of anomalies and the most beautiful landscapes I've seen to date. What somewhat reminds me of the movie 'UP' crossed with Avatar, the Cuban countryside rolled by as we drove between cities in the classic 'tourist' cars. Farmers slashed the sides of roads with machete, (there are no lawnmowers here) people rode along the autopista on horse and carriage, at the same time that new, state of the art John deer tractors cruised along beside us. But there is something confusing, weird or out of place in nearly every turn of Cuban life; whether it's a Mercedes Benz in a driveway of a small country town or a mac book in a hidden cafe of Trinidad you will always be randomly surprised, and then instantly confused.

It is hard to ignore the Signs for the Revolution everywhere. Huge posters, banners, memorials and marks along the sides of roads, mainly just before entering different cities are a constant reminder for the average tourist that Cuba is still under a Half century long revolutionary, somewhat dictatorship government. It's hard to know what to think when you do come across signs like this, but I suppose that's life here, and without probing deeper it's difficult to understand or know whether people are in fact happy with the government. I have often wondered whether it was the embargoes that did more damage or the communism itself; or maybe it's just the unfortunate combination of them both that sealed Cuba's fate.

This is a country that is from now on forever changing; a country where words can not describe and photos can only attempt to capture the Cuban life. In the end, I had to put my camera down and remind myself that this was not about capturing the perfect Instagram snap; this was about watching, learning and soaking up all that Cuba could offer.