This is the time of year when high school seniors finalize their plans for college, including budgeting for the year to come.

The Illinois budget impasse has made this year an especially challenging one for high school seniors on two fronts. One concerns the general state of public universities in Illinois. Having received no state funding since the budget crisis began on July 1, the state's nine public universities are in varying states of struggling. This includes Chicago State University, which is preparing to close at the end of the month if state help doesn't arrive, and Eastern and Western Illinois University, both of which recently have laid off non-teaching staff. (WIU's April 13 layoff notice of 110 employees is here. EIU laid off 177 workers in February.)

With Gov. Bruce Rauner and House Speaker Michael Madigan still deadlocked, it looks possible that the state funding drought could extend well into Fiscal Year 2017. Understandably, students are apprehensive about starting their college careers at institutions that are on such shaky financial ground. College is stressful enough without wondering whether the institution will survive your first semester.

The second front concerns what for 50 years has been among the most reliable and fairly distributed forms of financial aid for students attending any college, public or private, in Illinois. In the 2014-2015 academic year, the Monetary Assistance Program provided $357 million in grants to more than 128,000 students, with need-based awards averaging about $2,800. 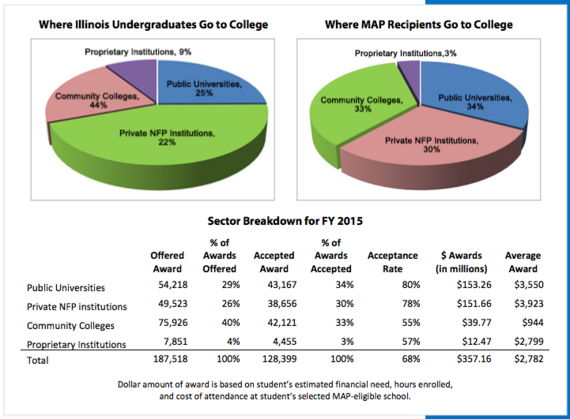 But with no higher education budget covering the current school year, awards that had been promised to students a year ago never arrived. MAP grants are paid directly to schools, which reduce a student's tuition accordingly. When the money didn't come, most schools absorbed the cost. Faced with the prospect of a second year without funding, some schools have begun warning that students themselves will be responsible for paying undelivered MAP grants in the 2016-2017 school year.

Columbia College in Chicago, which covered $7 million in MAP grants for 1,800 students this year, announced this month that it won't do so next year.

Public community colleges and universities could follow, state officials told the Illinois Senate Higher Education Committee this week. As reported by The News-Gazette of Champaign:

James Applegate, executive director of the Illinois Board of Higher Education, told the Senate Higher Education Committee that many community colleges and private universities are not covering the cost of the grants this spring "and certainly an increasing number will join them in the fall. And although our four-year universities have committed for it this year, there are clear indications that some may not be able to do it in the fall.

And Matt Berry, a staff member with the Illinois Community College Board, said that only "a handful, four or five" of public community colleges would be able to cover MAP grants next fall.

Applegate added that MAP funding may not be the greatest worry for colleges if the budget impasse stretches into FY 2017: "In some cases, we're not simply talking about not serving MAP students. We're talking about the continued existence of the institution."

Not exactly encouraging words for students whose only options for college are the moderately priced Illinois public community colleges and universities.

"There is definitely a heightened level of concern from students and parents - mostly parents - about the state budget impasse," says Beth Gilfillan, a guidance counselor at Woodlands Academy of the Sacred Heart in Lake Forest and president of the Illinois Association for College Admission Counseling. "A lack of operating funds for state universities and community colleges is causing more and more schools to cut staff and faculty, and families are hearing this. Without funding for MAP grants, an increasing number of students are left wondering how they will afford college at all."

Gilfillan doesn't actively discourage students from applying to Illinois' public universities, but she makes sure they're aware of what's going on with state funding and of other college options.

"I am always careful to tell them that we don't know what will happen in the future, but it's important to consider the budget issues, stay informed, and make sure to consider all their options," Gilfillan says. "I am encouraging students, especially those who have greater financial need, to look at schools in a better position to support them financially, such as those out-of-state colleges that offer Illinois students close to in-state tuition."

The Illinois Student Assistance Commission, which administers MAP grants, usually answers questions this time of year about how much MAP money will be available to distribute. It based its FY 2016 estimate on the 2015 disbursement. But with nothing budgeted in 2016, there's nothing on which to base next year. As the budget impasse dragged into fall last year, ISAC created a frequently asked questions document to address concerns of students who had been promised grants.

"One wouldn't have thought we have to do an FAQ for a second year," said ISAC spokeswoman Lynne Baker.

History provides some reason for optimism that MAP funding will be restored at or near the level of FY 2015. Gov. Bruce Rauner had proposed keeping its funding level in his budget while Democrats included $397 million in the higher education bill they approved and Rauner vetoed. And, as Baker notes, "MAP has been funded for almost 50 years with bipartisan support."

Rauner has proposed reforms to the state government's purchasing system that he says will save $500 million that could be invested in higher education, but the Democrat-controlled General Assembly has yet to act on it.

"We could fund our MAP grants with procurement reform. That's half a billion dollars. That's more than we need for MAP grants," Rauner said at an Illinois Chamber of Commerce event this week.

"High school counselors are telling kids not to go to school in Illinois. It's ridiculous," Cullerton said.

As with so much else in the budget standoff, there's consensus that that MAP and higher education funding situation is unacceptable. And both sides are convinced that (A) it's the other side's fault and (B) they have public opinion in their favor. As long as A and B hold, so will the budget impasse.

NEXT ARTICLE: Student: Why I'm glad I chose Eastern Illinois University, but I'm not proud to be an Illinoisan