Here we are again, that time of year where love is officially celebrated between family, friends, lovers, crushes and colleagues. Valentine's Day. Honestly, we both look forward to this holiday. What's not to love?

We're sentimental. We long for time with family and cherish every moment in their company. We love time with friends and savor every memory. We believe in true love. The romantic, all-or-nothing, "'til death" kind of love. We express it with gifts of flowers, cards, candy, chocolate and gold--beautiful, delicate gold--especially on Valentine's Day. Valentine's Day is the holiday for love, but the gold so many people give each other as a symbol of their love may be fueling violent conflict in the Democratic Republic of Congo. The silver lining: we can do quite a bit as consumers to help our jewelry companies address conflict gold. 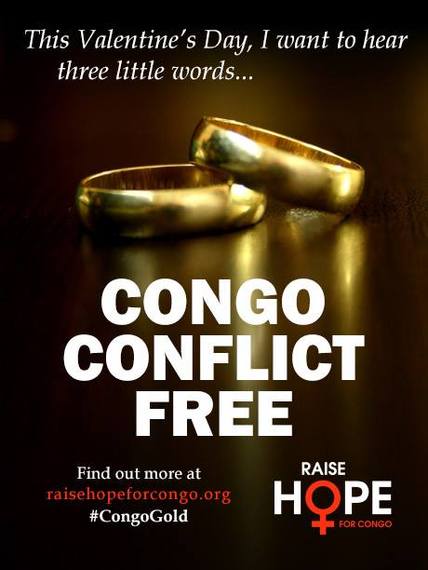 The Facts: Much of the gold mined in the eastern part of the Democratic Republic of Congo benefits armed groups guilty of committing mass atrocities including rape and torture. The jewelry industry is the largest purchaser of gold worldwide, accounting for roughly half of global demand for gold. Jewelers purchase gold from numerous suppliers along a murky supply chain, and most cannot say where the gold originates or whether it fueled armed violence. Click here to see how gold travels from child miners to jewelry companies.

The Call: This Valentine's Day, we are calling on the world's leading jewelers to shine a light on their supply chains and join a growing movement to establish conflict-free gold mines and trading routes in Congo. When activists demanded an end to blood diamonds from war-affected Sierra Leone, Liberia, and Angola, jewelers responded. They can and must use their leverage again to support peace in Congo.

Progress with Electronics: Electronics companies have helped cut off revenues for militias in Congo from minerals sourced for electronics products (tin, tantalum, and tungsten, or the 3Ts). Armed groups are now making significantly less income from these minerals than they have previously.

Despite major progress toward a clean, conflict-free 3Ts mineral trade, gold remains an accessible source of income to armed groups who are able to smuggle it more easily because of its size. An estimated 10 to 13 tons of gold, worth between $400 to $600 million, is smuggled out of eastern Congo every year, and a significant portion of this trade directly supports rebel groups and criminal networks implicated in the commission of mass atrocities.

The Golden Opportunity: Jewelry retailers can make a difference by committing to sourcing conflict-free gold from Congo. That commitment, together with a few other key steps, can help set up conflict-free gold mines in Congo, which would help cut armed groups out of the trade. The tech sector set up the Conflict-Free Tin Initiative, and now electronics giant Philips sources clean tin from a mine that used to be controlled by warlords. The jewelry industry can do the same for gold mines and help shift the economic incentives of armed groups and foster a clean gold trade that drives peace rather than war.

The Movement: A new movement to make our products conflict-free is emerging and we are inspired by the rapid growth of this international peace movement. 150 college campuses have taken action with the Enough Project's Conflict-Free Campus Initiative. We have seen the very best in people, corporations, and our elected leaders responding to the deadliest conflict on earth.

NFL Green Bay Packers quarterback Aaron Rodgers and linebacker Andy Mulumba recently joined us for a Rally for Congo. Thousands of student activists turned out on a cold Wisconsin night, and ESPN later aired a segment on ESPN NFL Sunday Countdown. Rallies and campus events like this are being organized in Congo and all over America and Europe.

Encouraging progress by the electronics industry has upped the ante for the jewelry industry. The question is, who will emerge as an industry leader in jewelry the way that Intel, HP, Dell and Apple have from tech?