The computer or tablet on which you're reading this post is more likely than not shrouded in blood.

You see, diamonds aren't the only minerals at the heart of violent conflicts in sub-Saharan Africa. In the October issue of National Geographic, reporter Jeffrey Gettleman and photographer Marcus Bleasdale journey to Congo, where the mines yield bountiful treasure, from gold to cobalt to copper. But more valuable than all the jewelry in the world is an element called tantalum, used to make microchips for electronics. And thus those wonderful, seemingly magical devices ultimately perpetuate one of the worst humanitarian crises in one of the most brutal places on earth.

The first child soldier pops out of the bush clutching an AK-47 assault rifle in one hand and a handful of fresh marijuana buds in the other. The kid, probably 14 or 15, has this big, goofy, mischievous grin on his face, like he’s just stolen something—which he probably has—and he’s wearing a ladies’ wig with fake braids dangling down to his shoulders. Within seconds his posse materializes from the thick, green leaves all around us, about ten other heavily armed youngsters dressed in ratty camouflage and filthy T-shirts, dropping down from the sides of the jungle and blocking the red dirt road in front of us. Our little Toyota truck is suddenly swarmed and immobilized by a four-and-a-half-foot-tall army.

This is on the road to Bavi, a rebel-controlled gold mine on the Democratic Republic of the Congo’s wild eastern edge. Congo is sub-Saharan Africa’s largest country and one of its richest on paper, with an embarrassment of diamonds, gold, cobalt, copper, tin, tantalum, you name it—trillions’ worth of natural resources. But because of never ending war, it is one of the poorest and most traumatized nations in the world. It doesn’t make any sense, until you understand that militia-controlled mines in eastern Congo have been feeding raw materials into the world’s biggest electronics and jewelry companies and at the same time feeding chaos. Turns out your laptop—or camera or gaming system or gold necklace—may have a smidgen of Congo’s pain somewhere in it.

In recent years, U.S. lawmakers and corporate leaders have tried to lessen the technology industry's dependence on the fruits of such chaos, and great strides have been made -- but there's still so far to go. The number of conflict-free mines pales in comparison to those that fund violent rebels, furthered by a long-established system of cooperation between weak government officials and powerful militia leaders.

"They are all sharing the illegal spoils. It’s a scramble. It’s grab as much as you can," a United Nations official told Gettleman. "There’s no easy solution," he added, "and I’m not even sure there is any solution.”

Take a look at harrowing images from the mines taken by Marcus Bleasdale. You can find the entire slideshow on the National Geographic website.

PHOTO GALLERY
The Price Of Precious
Download
Calling all HuffPost superfans!
Sign up for membership to become a founding member and help shape HuffPost's next chapter
Join HuffPost 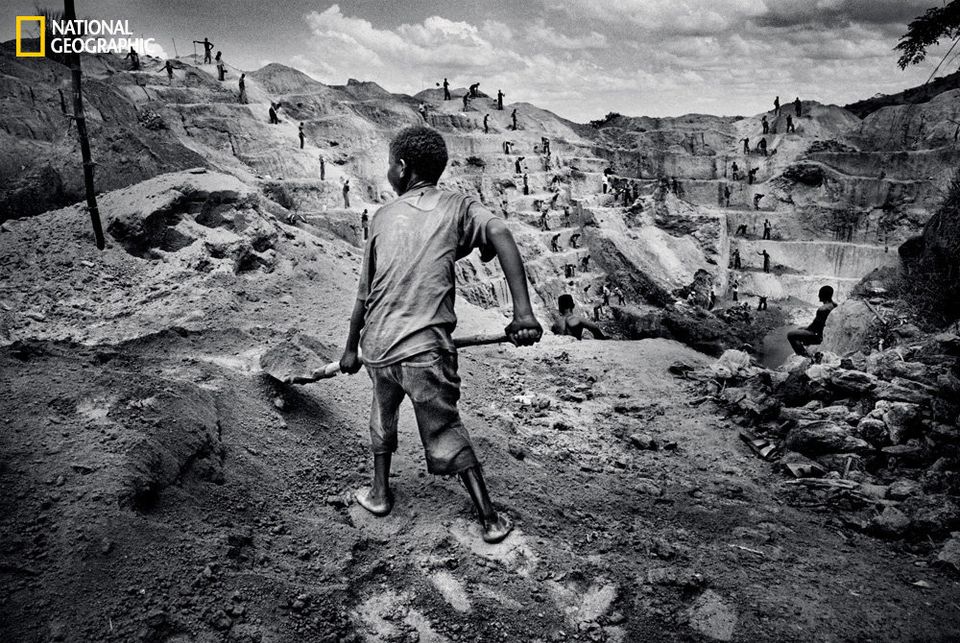