World powers and regional neighbours are scrambling to contain the latest violence in Congo's volatile east, where political and ethnic rifts and competition for vast mineral resources are again threatening to ignite a regional war.

At a summit in the Ugandan capital, Kampala, over the weekend, regional presidents demanded that the M23 rebels pull out of the strategic border city of Goma.

U.S. Secretary of State Hillary Clinton, speaking in Washington on Wednesday, said withdrawal was the only option for the rebels.

"There is only one way forward. They must meet their commitments under the Kampala accords to cease their attacks, withdraw from Goma and pull back to the July lines," Clinton said in remarks with the visiting head of the African Union Commission, Nkosazana Dlamini-Zuma.

Compliance would signal progress in efforts to negotiate a peaceful end to the crisis, although the rebels - who U.N. experts say are backed by neighbouring Rwanda - have given no indication they were ending their eight-month insurgency.

It appeared earlier on Wednesday as though the rebels were ready to cooperate.

"Goma will be later. ... We're prepared for the return of government troops. They're going to come," he said.

Makenga said rebel forces would withdraw about 20 km (12 miles) from Goma, leaving 100 soldiers at the airport and allowing government troops to return to the city, as set out under the terms of the deal.

But witnesses and residents living in areas freshly under the control of the rebellion said M23 fighters were holding on to their positions.

In the town of Sake, 25 km (16 miles) west of Goma, young rebels smoking cigarettes and holding machineguns told Reuters they had received no orders to withdraw.

"They're still in town. They've not left. They're still in the hills and we've seen no movement of troops," said Sake resident Isaac Kanefu, who accused the rebels of extorting illegal taxes from townspeople.

"If the army comes back, it'll be better," he said.

The rebels were also maintaining control over Mushake, a town farther west in the territory of Masisi, residents said.

Ugandan military chief Aronda Nyakayirima said on Tuesday after a meeting with Makenga that M23 had agreed to leave Goma unconditionally. Defence officials from neighbouring countries are due to travel to the city on Friday to verify progress.

A rebel spokesman said late on Wednesday that M23's fighters would leave Goma on Friday.

The rebels seized Goma on Nov. 20 after Congolese soldiers withdrew and U.N. peacekeepers gave up defending the city.

In exchange for a rebel pullout from Goma, Congo's government agreed in Kampala to listen to M23's grievances. But Congo Information Minister Lambert Mende said on Wednesday he remained skeptical that the rebels would leave the city.

"We're waiting to see it in reality, because the M23 elements and those who support them have made us used to red herrings. We're used to their unkept promises," he told a news conference in the capital, Kinshasa.

At the United Nations, a Congolese envoy accused Rwanda of supporting the rebellion to prevent the arrest of former Congolese warlord Bosco Ntaganda, who is wanted by the International Criminal Court. Rwanda dismissed the accusation as "far-fetched.".

The rebels said initially they took up arms over what they cited as the government's failure to respect a March 23, 2009, peace agreement that saw them integrated into the army.

They have since broadened the scope of their movement, declaring their aim to "liberate" the entire Central African nation and topple President Joseph Kabila.

M23's political leader Jean Marie Runiga, initially cast doubt on the Kampala deal, saying on Tuesday that a pullout was contingent on a long list of demands, including the dissolution of the elections commission and the freeing of prisoners.

The mixed messages from Makenga and Runiga could be a sign of divisions within the movement, according to analyst Jason Stearns at the Rift Valley Institute independent think tank.

"This is a military movement with a political wing created post facto. ... It's undermined internal cohesion," he said.

Stearns believes M23 may be coming under external pressure, given the storm of protest from regional powers caused by the rebel capture of Goma.

"The future of M23 depends on the diplomatic dance between donors, countries in the region and Kigali," Stearns said.

Rwanda, which U.N. experts accuse of giving orders to the Tutsi-dominated rebels and supplying arms and recruits, has twice invaded Congo over the past two decades, sparking a conflict that has killed more than 5 million people.

It justified its interventions by the need to pursue Rwandan Hutu militias who fled into Congo after carrying out the 1994 Rwanda genocide in which some 800,000 Tutsis and moderate Hutus were killed.

The AU's Dlamini-Zuma, speaking in Washington, said "fingerpointing" at Rwanda was not helpful, and both she and Clinton expressed hope that Kigali would follow through on commitments it agreed to at the Kampala summit.

"There was an agreement, there is a path forward, but it is up to the parties now to hold themselves accountable and each other for acting on those agreements," Clinton said.

The conflict in eastern Congo - which has big reserves of gold, tin and coltan, an ore of rare metals used in making mobile phones - has displaced 140,000 civilians this month alone, according to the United Nations.

The International Committee of the Red Cross said on Wednesday that dozens of war wounded, including civilian women and children, were awaiting urgent treatment in hospitals. (Additional reporting by Media Coulibaly in Kinshasa and Andrew Quinn in Washington; Writing by Bate Felix and Joe Bavier; Editing by Tom Pfeiffer and Peter Cooney) 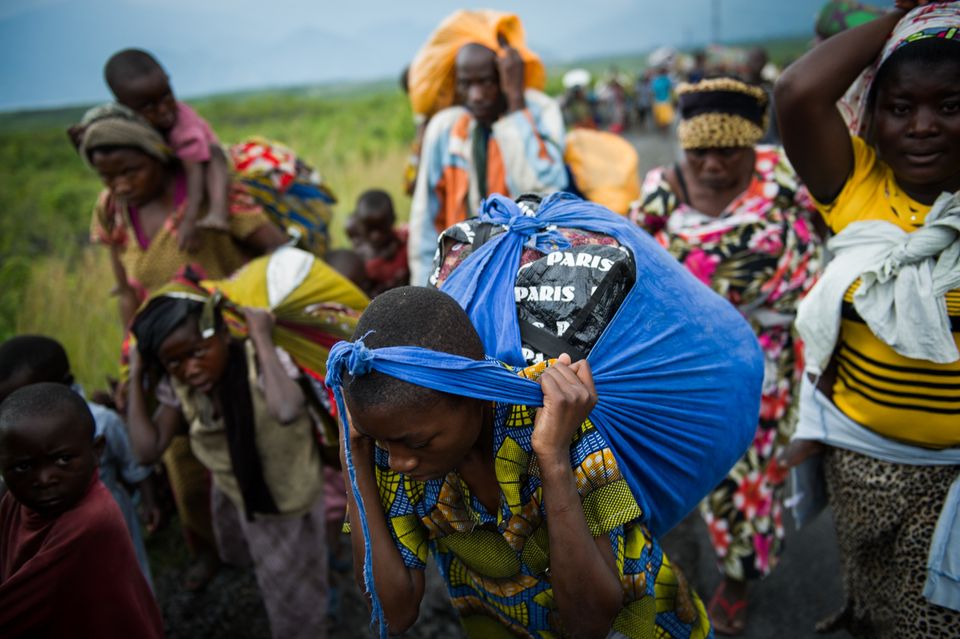 1 / 11
Thousands of Congolese flee the town of Sake, 26km west of Goma, following fresh fighting in the eastern Democratic Republic of the Congo town on November 22, 2012. Fighting broke out this afternoon causing people to flee the town and head east, towards Goma, to the camps for the internally displaced in the village of Mugunga. AFP PHOTO/PHIL MOORE (Photo credit should read PHIL MOORE/AFP/Getty Images)
Getty Images