Wednesday, January 6, 8:00pm CST--There has been much misinformation in international news reports about the location of the Tongo forest and risks faced by the chimpanzee population in Virunga due to the lava flow from the eruption of the Nyamulagira volcano.

Primate expert Jo Myers Thompson created this image and contributed an explanation regarding the lava flow. 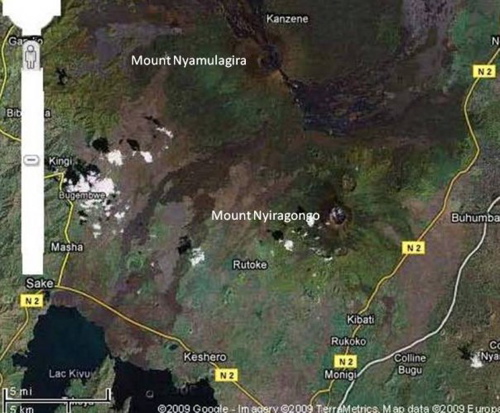 As you can see from the picture I sent above, the lava fields of both volcanoes extend towards the south (the Basse Plaine de Lave) and to the north (the Haute Plaine de Lave). The current flow moves from the circular rim of the Mt. Nyamulagira (the northern volcano) towards the south. The Tongo forest lies between 1o20' and 1o15' South and 29o05' and 29o10' East, on one of the lava flows from the Nyamulagira. The rim is to the right of the name.

Friends and officials in Goma are reporting that the Nyamulagira volcano is still erupting and that the water supplies and air are contaminated with soot. Yesterday's flyover of the crater showed a spectacular burst of gas and lava. Rangers report that the lava flow has traveled 21 kilometers (13.5 miles), and is only 7 kilometers (4.5 miles) from the Goma-Sake road. "The devastation is widespread," they say. 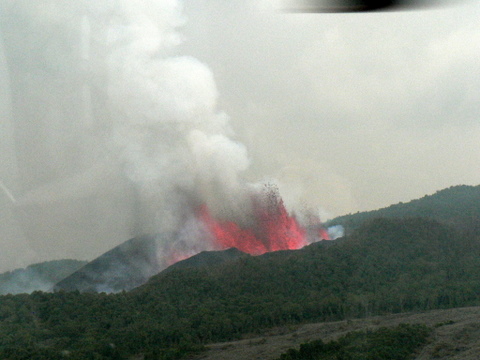 Now there are meetings and meetings in which they (officials) have set up a committees to manage the crisis in case human settlements are touched.

Today it is reported that some people have started moving from Kichanga ( Masisi territory) to Sake.

The dust resulting from the eruption has already effected the vegetation and water. Some livestock eating the affected plants are also contaminated.

All these days Goma town is foggy.

Eastern Congo awoke in the early hours between Friday and Saturday there to the eruption of Mount Nyamulagira, located 16 miles from the provincial capitol of Goma. Lava is flowing into the World Heritage Virunga Park, burning the forest, and threatening endangered chimpanzees at the Tongo Chimpanzee Sanctuary. Fortunately the 200 or so mountain gorillas are not near the lava flows at this time.

There were originally three lava flows, according to Virunga Park Director, Emmanuel DeMerode. We last spoke with him on Saturday when he explained that the three flows had merged into one stream that was flowing south and southwest.

There are some excellent photos and commentary on DeMerode's website.

So far, the rare and endangered Togo chimps have been spared.

We continue to monitor the wildlife situation. Fortunately the chimpanzees of Tongo are still out of harm's way. Some antelope and other smaller animals have been spotted moving away from the flanks of the Nyamulagira, but so far we have no casualties to report on that front. It is of course hard to tell as we cannot get too close. We will be able to evaluate properly once all this has stopped.

The United Nations Organization Mission in Congo (MONUC) is assisting DeMerode's park rangers as they continually monitor the lava flow.

MONUC civilian and military components in North Kivu remain on stand by and ready for any further support to the local authority, which has reassured the populations that there is no danger for Goma and its surroundings, and that the other main volcano in the region, the Nyiragongo, situated closer to Goma, would not be affected by the outburst of Nyamuragira.

The National Institute for the Conservation of Nature though stated today that it was concerned about the threat posed by this eruption on the Virunga National Park ecosystems and wildlife, including the possible migration or death of animals living in the park.

This could not come at a worse time for the civilian populations of Masisi territory, which have been caught in the crossfire of warring government and rebel troops. Undisciplined and recently integrated FARDC (Congolese Army) elements, led by wanted war criminal Bosco Ntaganda, have committed serious violations of international humanitarian law, including torture, rape and killings of civilians.