One of the most interesting fields of study today is the gut-brain axis, a burgeoning topic with vast implications that we are now, for the first time, starting to appreciate. The gut, or gastrointestinal tract -- the long tube that starts at your mouth and ends at your, well, you know -- is your largest interface with the environment, spanning the width of two football fields if unrolled and laid flat. It has long been referred to as "the second brain," and for good reason. It contains its own nervous system -- the enteric nervous system -- made up of about 500 million neurons which create about 90 percent of your body's serotonin, a neurotransmitter involved in mood. It also is where 70 percent of your body's immune system can be found.

One of the most fascinating things about the gut is that it is home to nearly 100 trillion microbes -- germs! -- that science is proving has a very important say in your health. Did you know that the amount of microorganisms living symbiotically in your gut outnumber your own cells 10 to 1? Or that the genetic material that they are cumulatively comprised of outnumber your own genes 100 to 1? This is a vast amount of information. In fact, the weight of the entire microbiome, the name given to this universe of simple cells, can be as much as your own brain -- 2 to 3 pounds -- and you carry them around with you every single day. And they don't even pay rent! Or do they?

To say that the microbiome gives back is an understatement. In fact, the metabolic activities performed by these bacteria nearly resemble those of an organ itself. They manufacture many important compounds that can affect everything from brain health to mental states to overall inflammation. For example, butyrate is a compound that possesses both preventive and therapeutic potential to counteract inflammation (a cornerstone of chronic disease) and improve insulin sensitivity (important to ensure well-fed cells). You could consume it from grass-fed butter, an excellent dietary source, or you could just maintain a healthy, diverse gut flora which produces it for you, for free (and for less calories).

What about its potential for disease therapy? Well, an article in the journal Current Gastroenterology Reports from 2013 noted a few disease states are closely linked to the GI microbiota, namely, obesity, metabolic syndrome, diabetes, and even autism spectrum disorder. Patients with any one of these disorders may, theoretically, see an improvement with microbiome tinkering. There is even research emerging that the microbiome can be predictive for some. This would be a massive help in facilitating early treatment or prevention for at-risk individuals. Even more fascinating, and hinting at a bright future for microbiota therapy, are the isolated case reports of positive microbiota transplantation responses with multiple sclerosis, Parkinson's disease, and chronic fatigue syndrome.

The power of the microbiome even call into question free will, as behavior itself can be modified just by altering its composition.

This exciting science, thankfully, is not being ignored. Along with the research being done that has proved life-saving in some cases, some Silicon Valley start-ups (one being uBiome) have risen to the challenge of trying to make sense of the data that could one day (soon) come from sampling a wide array of personal microbiomes. Empowering books on the subject seem to be popping up left and right, most notably with Naples neurologist David Perlmutter's highly-anticipated contribution, Brain Maker out this month, and it's a topic that I intend to touch on in my upcoming documentary, Bread Head.

It is indeed a fascinating time for health science, where once-vilified germs are now being exonerated as potential co-conspirators in our health. You may want to consider the humble microbe next time you reach for that hand sanitizer or antibiotic -- remember, you are a superorganism, and microbes maketh man! 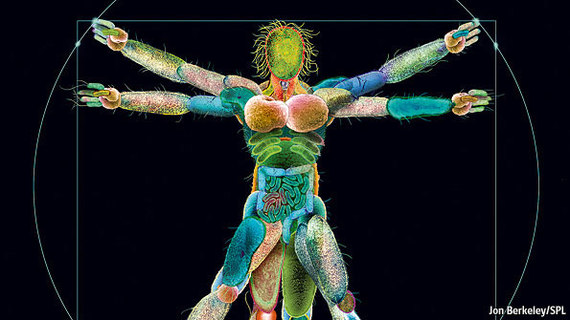