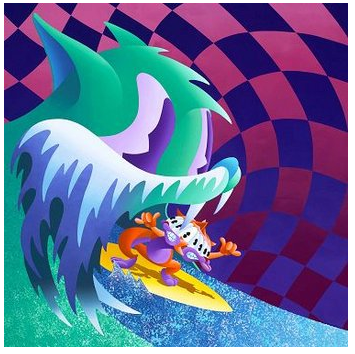 Lowbrow art -- which embraces and celebrates hot rod, surf and cartoon iconography so uniquely Southern Californian -- hit the public full-force in 1987 when Robert Williams' pop Bosch painting, Appetite for Destruction was slated to grace the cover of the eponymous Guns N' Roses album. Hue and cries, sturm und drang exploded from concerned feminists and parents over the artwork's themes of sex, drugs and decadence. Condemned as corrupt art -- shades of Weimar Republic -- the painting instead became the inner sleeve lining.

The term "Lowbrow" -- meant as a commentary on the more idealistic, romanticized Highbrow art movements -- comes from the title of Williams' first book The Lowbrow Art of Robert Williams. While Williams never meant for the term to define or crystallize a burgeoning movement, it stuck as a handy term to explain the emerging art of Coop, The Pizz, Raymond Pettibone, Shag, Mark Ryden, Anthony Ausgang and others.

Over the past decades, Lowbrow has morphed -- or split, depending on the school of thought -- into Pop Surrealism. Popular iconography transposes into multi-layered symbols which are at once easily accessible yet fraught with layers of meaning that hinge on the individual's ability to respond, react and parse. Or not.

There a fascination with the underground river of America culture, dark obsessions and childhood pleasures, combining these with bold verve and at time ironic commentary. In a complex and sardonic twist Lowbrow art has become very collectible and is now considered high art, despite its "low" themes.

Anthony Ausgang, whose vibrant, playful cartoon cats inhabit a universe of warping walls, often facing impending disaster, surfs now to the top of mainstream recognition with his album cover art for the Grammy award winning, multi-platinum band MGMT's sophomore release Congratulations. Featuring a two-headed cartoony creature frantically escaping a wave that takes the form of giant, oddly melancholy fanged feline, the cover -- perhaps a commentary on fame -- caused some strong reactions from fans. (It was released exclusively to BoingBoing before music media got a look -- a very populist statement). Sample comments from websites include:

I remember back in the day when it was cool to hate things that were popular. But then hating popular things became too popular to do that. So I hate it.

Im not too impressed with this album cover. I have a feeling their new record is going to suck.

It probably grows on you like everything else MGMT makes. Unexpected, but that was just what I was expecting. I bet it fits the album or they probably drew it on an acid trip. They are the best new band. There new live songs that I've heard sound really good

Mapplethorpe photographed Patti Smith for Horses, Warhol famously created the Velvet Underground's banana album cover, so the crossover of art and music is nothing new. But that this cover is causing fans such complex distress, perhaps worrying them that their beloved musicians have changed direction shows the power of an image to affect perception. Which should always be art's end, and certainly this is what Lowbrow and Pop Surrealism have achieved over the past three decades.