Last week, as graduation season came rolling around, I thought to myself, "What if a commencement address at an elite college actually told the truth? What would that sound like?" So I decided to record that speech.

"Dear Super High-Achieving College Grad and parents now deep in educational debt, except for those who are rich enough to cough up the whole $200 grand no problem --

You may want to adjust your seat right now, because I'm about to be a major pain in the ass. Today, I've got some good news for you and some bad news.

Actually, I'm just kidding. It's all pretty much bad news. And here's the summary: You kids just spent what could have been the best 4 years of your life stressing out way too much, way too often over shit that simply did not matter, and acquiring knowledge that you've already forgotten or will never use again*.

After you leave Tercentenary Theatre today, everything that you did in college - every deadline you met, every bullshit paper you wrote, every exam you crammed for, every all-nighter you pulled, every comp you passed or flunked, and every extracurricular you ran - all of that gets summarized into two measly lines on your résumé. And nobody will ever care about any of that shit again.

What's even worse is that these 4 years have laid down a pattern for the rest of your life, which you will now spend the next 20 years of your life trying to unravel. But only if you catch on to how bad it is now, instead of living in a fog for the next fourscore.

Right now, you're like a greyhound - a sleek, fast, racing machine bred tochase around a track a mangy little fake rabbit that it will never catch. Except that you don't know that a) you will never catch it and b) if you do catch it, boy are you going to be one disappointed dawg, dawg. Heck, you can't even eat the damn thing.

For the past four years - and the four years prior, and the next fourteen years, if you have decided to go to some flavor of graduate school - you have been trained to do well on exams, as some kind of measure of your worth as a human being.

Except that there is no situation outside of school in real life where you are required to spew out gigantic chunks of information on demand, under time pressure, without access to corroborating references, on some esoteric topic that you will promptly forget about before never using it again. Especially when you already have an item of clothing that already does all of that faster and more accurately - namely, your damn iPhone. It's almost like they've trained you to drive a horse carriage this whole time. And, oh, by the way - cars! 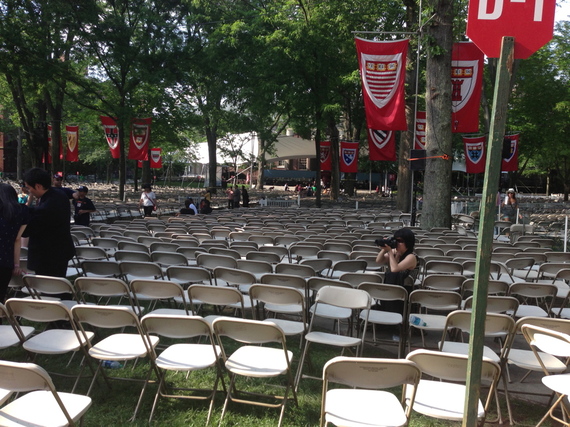 In the real world, you will never be asked to solve several difficult science problems in under 90 minutes without collaborators or full access to computing devices. It makes me tremendously sad to think that some of you could have become great scientists, but were discouraged because of some evaluative process that could never measure what you're truly capable of doing. Hell, Einstein, Bohr, Schrodinger and Feynman wouldn't have even gotten into Harvard today, let alone be let to major in physics.

You will never be asked to generate a bullshit paper about some aspect of 20th century Japanese political life which you are not only supremely unqualified to comment upon but also really don't give a flying fuck about.

And you will never be asked to finish two of these papers and take three final exams all in the same week while you pull four all-nighters (unless you decide to go to medical school, in which case that's a light week, for which I have a whole different rant).

There's this thing they talk about in decision science called "normalization of deviance." And I just want you to understand how far gone you have become if you are now slightly chuckling about all the stuff that I mentioned, thinking, "Yup, did that. It's kinda normal."

No, it's not, you knucklehead. You are being stressed out at levels that are inappropriate even for a fighter pilot in an Iraqi dogfight, or a gazelle being chased down by a lion on the Serengeti. Because nothing that you did in college actually mattered. And certainly didn't deserve life-or-death level stress responses..."

You can read the full text here, or listen to the speech here.

Hi! Dr Ali here. I'm a Happiness Engineer based in San Francisco. I wrote this book for smart, strong women called The Tao of Dating: The Smart Woman's Guide to Being Absolutely Irresistible, which has been the highest-rated dating book on Amazon for 157 weeks. Now available as paperback, audiobook, and Kindle ebook. If you'd like to read more of my stuff, hallelujah to that -- feel free to check out the Tao of Dating blog and my personal blog.