WASHINGTON -- President Barack Obama's strategy for combating the extremist Islamic State group is still evolving. But for some members of Congress on both sides of the aisle, one flaw in the plan has been clear for months: All of the weapons being sent to fight the extremists in Iraq are being routed through the central government in Baghdad, rather than going directly to the country's more U.S.-friendly Kurdistan region.

“ISIS is deadly and determined, and Iraqi Kurdish Peshmerga forces -- our critical partner in the fight against ISIS -- need U.S. weapons as quickly as possible," Sen. Joni Ernst (R-Iowa) said last month. "We simply cannot afford to have future delays at this critical moment in the battle."

Ernst, a member of the Senate Armed Services Committee, recently failed to secure passage of a measure that would have allowed the administration to directly ship weapons to the Kurds. Under current law, the U.S. government is only allowed to send weapons to internationally recognized sovereign governments -- not to autonomous regions within countries like Kurdistan. Since they cannot receive U.S. equipment directly, the Kurds must wait for the central government in Baghdad to share it.

Ernst co-sponsored the measure as an amendment to the must-pass National Defense Authorization Act, along with Sen. Barbara Boxer (D-Calif.), who sits on the Foreign Relations Committee. Ernst's comment reflects concerns on the part of both U.S. legislators and Kurdish officials that Baghdad has slowed weapons delivery to the Kurds despite their relative success against the Islamic State, also known as ISIS, and the Kurdistan region's continued vulnerability to the extremists.

The issue is especially sensitive because of Kurdistan's relationship with the Iraqi state. Baghdad and Iraqi power players worry that if Kurdistan receives direct military support from the U.S., it could push more forcefully for full independence in the future. And though some U.S. pundits and politicians have endorsed breaking up Iraq by supporting such independence, the White House has maintained throughout its nearly yearlong campaign against ISIS in Iraq that it seeks to maintain the country's integrity as a state.

In addition to the legal constraints, the administration has strategic concerns. If Iraq were to split into three segments -- a Kurdistan state in the northeast, a Shiite-dominated, Iran-influenced state in the south around Baghdad and a Sunni majority state in the east -- the Islamic State could further consolidate its power and its hold on Iraqi Sunni Arabs by stoking tensions between the bitter neighbors.

Suspicions already run high. The Kurds mistrust Sunni Arabs because some of them last year joined ISIS in massacring Yazidis, who are ethnically Kurdish. And earlier this year, Shiite leaders threatened renewed sectarian violence when they heard about a congressional proposal to recognize Iraq's Kurds and Sunnis as "countries" so Washington could directly arm them.

Despite those concerns, Secretary of State John Kerry invited Congress in September to change the law if it so chooses.

Lawmakers have tried to make that happen in different ways. Ernst and Boxer's measure was among the most plausible attempts because it did not attempt to classify the Iraqi Kurds as "a country." Yet even that approach has now failed: On June 16, the Senate voted 54-45 against the measure. The majority of Democrats, following the White House's lead, voted against the amendment.

An aide to Sen. Chris Murphy (D-Conn.), a member of the Senate Foreign Relations Committee who voted against the measure, explained the point of view of the majority of Democrats. Were the Kurds were to be directly armed, the aide told HuffPost, the central Iraqi government might be less likely to maintain the country's unity.

Murphy, the aide said, "believes the U.S. should push the government to work with [the Kurds and Sunnis] and that working with them separately takes that pressure off Baghdad."

Turkey, a NATO member and essential player in the ISIS fight, is also a concern, the aide added. Though Turkey has been friendlier with the Iraqi Kurds than with other Kurds across the region, it remains nervous that increased Kurdish power could inspire its own Kurdish minority to seek greater autonomy.

"Directly arming the Kurds would cause problems there and undermine other efforts in the region," Murphy's aide said.

The amendment's failure was a win for the White House, whose top lieutenants warned members of Congress prior to the vote that Ernst and Boxer's plan could make the situation in Iraq even messier.

The plan, Carter added, “fuels false narratives in Iraq and elsewhere in the region that the United States intends to partition the country.”

Though the vote means that the U.S. continues to be legally prohibited from directly arming the Iraqi Kurds, they remain important military partners. The State Department recently detailed to HuffPost the extent of America's indirect support to the group. 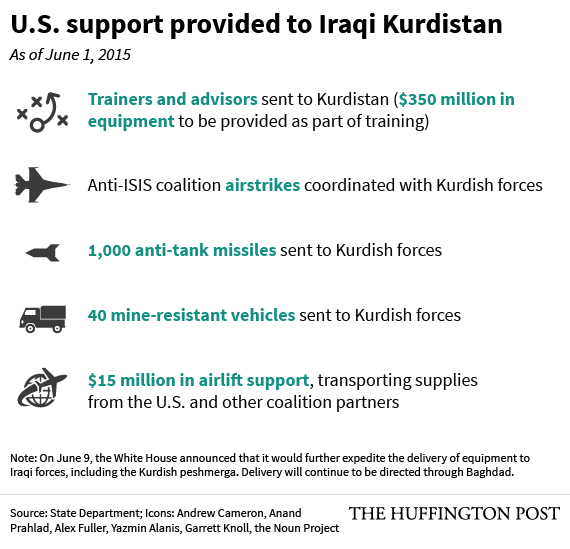 The government of the Kurdistan region made it clear that it supported the amendment, though it pledged not to get involved in the legislative tussle beyond that. But the measure's failure is understood to be a blow for the Kurds. Bayan Sami Abdul Rahman, the Kurdish representative to the United States, explained in a recent interview why she believes it is important that the U.S. directly arm Iraq's Kurds.

"The peshmerga are very lightly armed," Rahman told HuffPost, referring to the Kurdish forces who are holding back the Islamic State along a border thousands of miles long and have regained nearly all the territory the extremists gained from them.

"The situation now is much better than it was in the beginning," she added, "because the United States and other [anti-ISIS] coalition countries -- particularly France, Germany, Italy, the United Kingdom -- have provided weapons and training, and we're very grateful for that, but it's not enough."

(Watch the full interview with Rahman above.)

Rahman has previously warned that about the risks of delaying weapons deliveries to the Kurds, given ISIS's ongoing attacks on their region.

The representative noted in the interview that having the legal ability to directly arm the Kurds might prove important to the U.S. in the future because Baghdad, always wary of Kurdish autonomy growing too great, has in the past undermined the Kurdish forces' military capabilities.

"There is some history to this issue and I think it's important that we talk about that," she said. "In 2007, the Iraqi defense minister, the United States representative, and the [Kurdistan Regional Government] representative discussed weapons and training that we would be delivered by the United States and that the KRG would receive its portion of that. We didn't receive the weapons and the training in the way we should have, and under [former Iraqi Prime Minister Nouri al-] Maliki we were effectively under an embargo."

"So when we say that we want to be sure that the peshmerga receive the weapons they need and that they should be delivered direct," she continued, "it's because of this history -- this history of embargo, of using Iraq's sovereignty as a weapon against the Kurdistan region."

Though the difference in stance has placed Obama and Kurdistan President Massoud Barzani at odds, Barzani was careful to downplay the disagreement -- and avoid wading into an internal U.S. dispute -- during a May trip to Washington, saying he believed the administration was committed to giving his troops the weapons they needed. He did, however, personally thank Ernst and Boxer for co-sponsoring the amendment.

"The administration has said that it is not in favor of the work that's being done in Congress and we understand that," Rahman told HuffPost the week after Barzani's visit. "We just want our position to be clear."

Rahman's office declined to comment following the failure of the amendment. Though the idea of arming the Kurds has been shelved for now, it is likely to continue being discussed on Capitol Hill -- particularly because the Kurds have become a cause celebre on the right and because the situation in Iraq remains so unstable that proposals to change policy there can quickly gain traction.

This story is part of the first installment in The Huffington Post's new "Ambassadors Unplugged" series, which will interview prominent diplomats on important global issues. Previous articles from this installment can be found here, here, here, here and here.