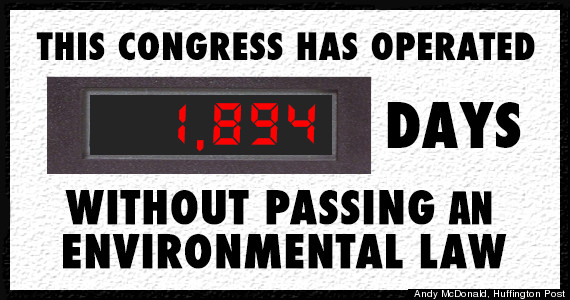 It's been a long time since Congress passed a major new environmental law -- at least 1,894 days as of Tuesday.

Based on an informal survey of people who follow environmental issues, the last big new law was probably the American Reinvestment and Recovery Act, also known as the stimulus bill, which passed the House and Senate on Feb. 13, 2009. President Barack Obama signed the bill into law four days later. That bill contained $90 billion in funding for green projects, which included grants and loans for clean energy, energy efficiency improvements, and green job training.

Some argue that the stimulus legislation was a spending bill, rather than big change in environmental law. The last actual, huge, precedent-setting environmental bill probably was the Energy Independence and Security Act of 2007, which passed Congress on Dec. 13, 2007. That was 2,322 days ago.

There is also a case to be made for other bills counting as "major" environmental achievements, such as the 2009 Omnibus Public Lands Management Act, which granted wilderness protection for 2 million acres of land in the U.S, and for 2012's Resources and Ecosystems Sustainability, Tourist Opportunities and Revived Economies of the Gulf Coast States (RESTORE) Act, which directed a large portion of fines related to the BP oil spill to be used for restoration projects in the affected region. Those two laws, however, affected a much smaller portion of the U.S. than the stimulus and the Energy Independence and Security Act.