Over two dozen lawmakers gathered on Capitol Hill to light traditional diya as a priest chanted Vedic mantras for the first-ever Congressional Diwali celebration. The event cut across party lines, as attendees were greeted with sweets, red tilak markings for their foreheads, and garlands of jasmine.

Though the White House has celebrated Diwali since the George W. Bush era, this was the first time that Congress has observed the holiday, perhaps due in part to the election of the first Hindu Congress member, Rep. Tulsi Gabbard (D-Hawaii) in November 2012.

Rep. Joe Crowley (D-N.Y.) and Rep. Peter Roskam (R-Ill.), Co-Chairs of the Congressional Caucus on India and Indian Americans, organized the event "in recognition of [the] increasing presence of the Indian-American community," reports The Hindu. Crowley called it "a truly historic event."

House Minority Leader Nancy Pelosi (D-Calif.) used the occasion as an opportunity to express her gratitude to Indian-Americans and to India itself, in the cultural and political realms. "I have come here to say Happy Diwali," she said. "United States owes a great debt of gratitude to India. Because our civil rights movement was built on the non-violent movement in India. Martin Luther King studied there, spoke there. We are blessed not only by that legacy, but also by the presence of so many Indo-Americans in our country."

Many expounded on the theme of diversity in America and its governing bodies, including Rep. Ami Bera (D-Calif.), the only Indian-American in the current Congress, who remarked, "It is great to be one Indian American in the Congress, but at our second, fifth Diwali celebration, we want to see more members of the Diaspora elected to the House of Representatives."

Rep. Gabbard told The Huffington Post, "As the first Hindu-American in Congress, it was deeply meaningful for me to celebrate this historic, first-ever Congressional Diwali lamp-lighting celebration on Capitol Hill. It was truly a privilege and an honor to share Diwali with my colleagues, who opened their hearts and showed tremendous support for the event, and with the entire Hindu and Indian-American community. This openness and kindness embodies the message of Diwali: that we must serve others before ourselves, celebrate the victory of light over darkness, and seek truth over untruth." 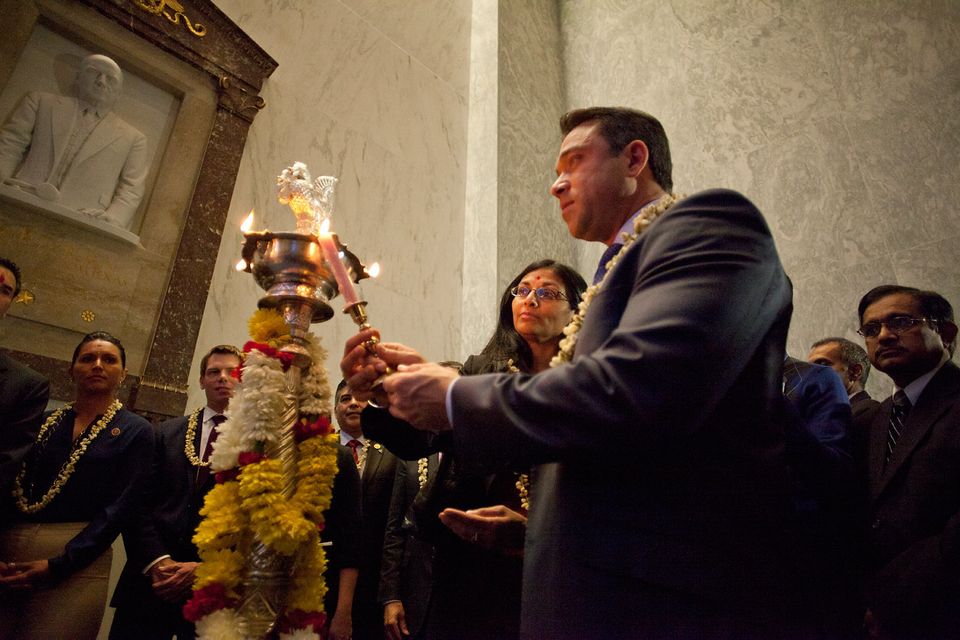