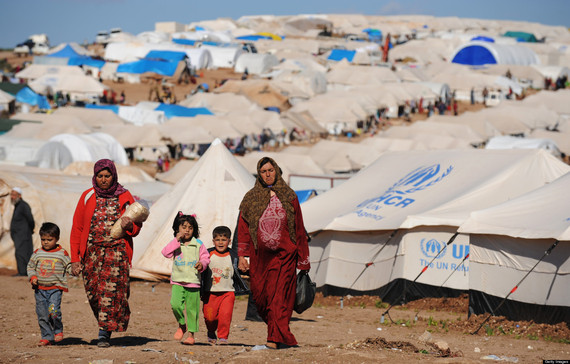 On Thursday, our nation's better angels lost. Fear won. We are called to take bold and generous action as we face the greatest humanitarian crisis in generations. Instead, a majority of members of the House bowed to fear, prejudice and political expediency and voted to pass the American Security Against Foreign Enemies Act.

The United States is about to send a troubling global message: "Refugees not welcome." And by singling out Iraqi and Syrian refugees, an arbitrary discrimination based on national origin is being enshrined in U.S. law. It's hard to think of anything more un-American than that.

Adding insult to injury is the sheer level of misinformation driving the debate. Presidential candidates, governors and members of Congress have all been shooting from the hip and hanging out in the fact-free zone. Representative Peter King, one of the leaders of the anti-refugee backlash, said, "There is no vetting as a practical matter." The Republicans' leading presidential candidate, Donald Trump, added: "We have no idea who these people are."

No vetting process? Let's take a detour into a more fact-filled zone. The real-world vetting process starts with the United Nations. The UN focuses resettlement on the most vulnerable refugees, and conducts their own screening that can last months. After candidates are recommended to the U.S., they receive a security clearance check that has several stages and that can last years. Meanwhile a refugee family must wait patiently, possibly languishing in a refugee camp in difficult and dangerous conditions.

The process on the U.S. side includes vetting by Department of Homeland Security, FBI, Department of Defense and multiple intelligence agencies, based on biometric checks, forensic tests, medical screenings, background checks that use databases that pull information from agencies from Interpol to the Treasury department, as well as in-person interviews. All of this happens before a refugee ever gets comes anywhere near American soil.

Even if one believe that this rigorous vetting process somehow needs improvements, you won't find any in the bill the House passed. Instead of augmenting the actual vetting process, the bill wastes resources by creating Congressional reporting requirements that could grind resettlement to a halt. The bill would divert agency resources from the actual vetting and monitoring in the refugee process to navigating Congress's politicized demands. But there are exactly zero concrete improvements to the security clearance process in the legislation.

Speaking of zero, that's the exact number, out of the over 2000 Syrian refugees resettled in the US since 2011 that have been arrested or deported on terrorism charges. Maybe the process is working after all. In fact, the process was already tightened after 9/11. The agencies involved knew long before the Paris attacks that the security clearance process must address the risks of terrorism -- and it does.

Of course no system is perfect. It's always possible that in the future one of these refugees could plan a terrorist attack. But an attack could also be attempted by someone coming over the border from Canada, or by someone else flying in on a tourist visa from London -- avenues into the country with significantly less screening. Historically, it's this "non-refugee" kind of border crossing that would-be terrorists have attempted. However, everyone will agree that we can't hermetically seal the borders completely. Perhaps not everyone. Given Mr. Trump's growing hyper-vigilance about foreigners and potential terror attacks, if he's elected maybe we won't get that "Big Beautiful Door" he promised for the new walls around the country after all.

At a time when our country should be uniting behind a sensible comprehensive approach to ISIS, too many elected officials are playing politics with our national security. Calls for military escalation and for battening down the hatches won't make anyone safer.

Accepting refugees is not only in keeping with the best American values and traditions; it is also strategically smart. The Paris attacks were designed to foster a backlash against Muslims and refugees.

Sending the global message "Syrian refugees not welcome" is a profound strategic error. Fundamentally, members of Congress are demonstrating they have not learned that defeating ISIS is much more a contest for hearts and minds than a military showdown. ISIS has a strategy that specifically targets the refugees, as Zach Beauchamp wrote:

ISIS despises Syrian refugees: It sees them as traitors to the caliphate. By leaving, they turn their back on the caliphate. ISIS depicts its territory as a paradise, and fleeing refugees expose that as a lie. But if refugees do make it out, ISIS wants them to be treated badly -- the more the West treats them with suspicion and fear, the more it supports ISIS's narrative of a West that is hostile to Muslims and bolsters ISIS's efforts to recruit from migrant communities in Europe.

Showing open arms and compassion to Syrians and Iraqis in need would do more to defeat ISIS than 10,000 bombs ever could. With the Paris attacks, ISIS has laid a trap for Europe and the U.S.. Today, the United States House of Representatives took the bait.

Congress should follow the example of France, which after experiencing the worst attack on their soil since WWII decided to move forward with its plan to accept 30,000 refugees over the next two years. It's not too late for Congress to respond affirmatively to the request of the United Nations to fulfill our responsibility to the world by accepting our fair share of people desperately fleeing a war we are a major party to. As the bill moves to the Senate, cooler heads and more compassionate hearts must prevail.