Three congressional lawmakers from California are accusing the U.S. Department of Justice of overreach in an ongoing crackdown against Harborside Health Center, widely considered to be the largest and one of the most well-respected medical marijuana dispensaries in the nation.

"We believe DOJ has overstepped its bounds in the Harborside case," Reps. Dana Rohrabacher (R), Sam Farr (D) and Barbara Lee (D) wrote in a letter last week about U.S. Attorney Melinda Haag's effort to shut down the Oakland, California-based Harborside. "We believe DOJ is not acting within the spirit or the letter of the law nor in the best interests of the people who depend on Harborside for reliable, safe medical marijuana."

The letter notes that public acceptance of medical marijuana has grown nationally, even as federal policy on the substance "stagnates." To highlight his support, Rohrabacher posed with Harborside's co-founder and executive director, Steve DeAngelo, at the dispensary: 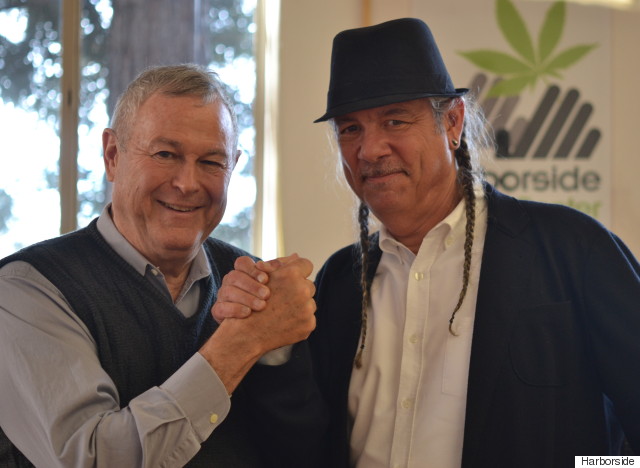 Twenty-three states so far have legalized marijuana for medical purposes, and 11 others have legalized limited medical use of a specific marijuana-derived compound. But the federal government continues to ban the plant, classifying it as one of the "most dangerous" substances with "no currently accepted medical use."

The law that the three lawmakers reference in their letter is the Farr-Rohrabacher amendment, named after its main co-sponsors. The historic measure, which was part of the $1.1 trillion federal spending bill passed in December, prohibits the Justice Department from using funds to interfere with state-legal medical marijuana programs.

Despite that new provision, lawyers from Haag's office appeared before the U.S. Court of Appeals for the 9th Circuit earlier this month to argue that the prosecution of Harborside should be allowed to proceed.

The Justice Department declined to comment on the lawmakers' letter due to the ongoing federal investigation.

Haag first sought to close down Harborside in 2012 on the grounds that the facility, which says it brings in roughly $25 million a year in revenue, had grown too large. Later that year, lawyers for Oakland sued to block Haag's actions, arguing that Harborside is an asset to the community and that closing it may create a public health crisis.

Harborside isn't the only medical marijuana operation that Haag has tried to shutter. Berkeley Patients Group, with the support of the city of Berkeley, is involved in a similar effort to beat back the U.S. attorney. Earlier this month, a 9th Circuit judge appeared to signal support for the Berkeley facility, which bills itself as California's oldest pot shop, by allowing it to continue operating while the court considers the pending litigation.

Despite the legal proceedings, Harborside's Oakland storefront and its sibling operation in San Jose are still open as well. Their clientele includes several children who suffer from severe forms of epilepsy, whose families have said cannabis tinctures are the only treatment that has helped.

"The people have spoken through their elected representatives," DeAngelo, the facility's executive director, said. "It’s time for the DOJ to start obeying the law and dismiss this misguided action against Harborside."