WASHINGTON -- As the U.S. continues to grapple with the threat of the Islamic State group, Republicans in Congress have argued that Iran should be a higher priority than the militant organization. Now, lawmakers have embraced an unlikely partner to argue that case: the Mujahedeen-e-Khalq, or MEK, an exiled Iranian opposition group that was until 2012 considered a foreign terrorist organization by the United States.

The House Foreign Affairs Committee this week became the latest power broker to conflate the U.S.-led fight against the Islamic State, sometimes known as ISIS, with the nuclear diplomacy efforts between the U.S., its international partners and Iran. A counterterrorism subcommittee invited Maryam Rajavi, who leads the MEK with her husband Massoud, to argue via teleconference that the theocratic Iranian government is to blame for the Islamic State's rise.

“If it were not for the Iranian regime’s domination of Iraq, the sectarian policies of its puppet Prime Minister Nouri al-Maliki, and the massacre committed against the Sunni population in Iraq, and if it were not for the slaughter of 250,000 people in Syria by the Assad regime and the Iranian regime’s Quds force, ISIS would have never been able to find such a fertile breeding ground for its emergence and expansion,” Rajavi said in her official testimony Wednesday.

Rajavi's recommendation for how best to defeat the Islamic State was music to the ears of Iran skeptics: regime change in Tehran.

Supporters of the nuclear negotiations with Iran suspect that hawks both in Congress and abroad feel the same way as Rajavi. Comments earlier this year from Sen. Tom Cotton (R-Ark.), of the Senate Committees on Intelligence and Armed Services, have reinforced that impression.

The House Foreign Affairs Committee's invitation to Rajavi raised eyebrows among Middle East watchers, and even prompted two other expert witnesses invited by the committee to back away from the panel that featured her. “The committee handled this abysmally," said Robert Ford, the U.S. ambassador to Syria until 2014 and a senior fellow at the Middle East Institute, in an interview with Al-Monitor this week. "What the fuck do the MEK know about the Islamic State?”

Ford ultimately agreed to testify before the committee in a panel separate from Rajavi. “I think this is a discussion that our people in uniform deserve,” he told HuffPost after his remarks. 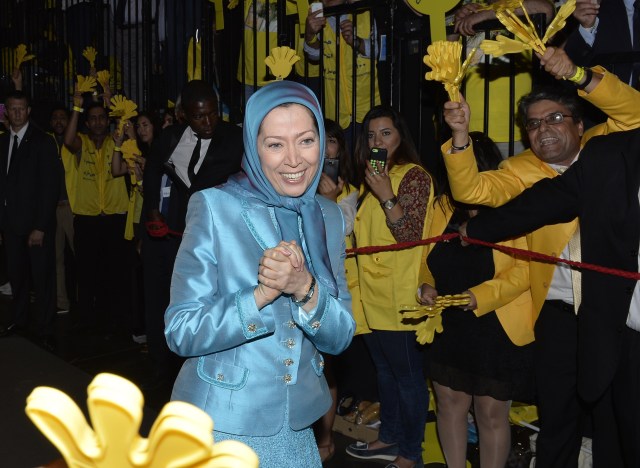 Rajavi's depiction of how Shiite-led Iran bolstered Sunni extremism by backing sectarian Shiite allies in Iraq and Syria matches some of the conventional wisdom around the Islamic State. Yet skeptics argue that it doesn't quite make sense for the House committee to have invited Rajavi to testify, given that her focus is on Iran and that the MEK has had little direct experience with the Islamic State's onslaught. To these skeptics, the move seems politically calculated.

Thousands of people in Iraq and Syria have actually experienced the group's brutality firsthand, critics of Rajavi's appearance note, and those victims have not been invited to testify. The Syrian Observatory for Human Rights announced on Tuesday that the Islamic State has killed more than 2,000 Syrians off the battlefield since it declared its caliphate last June, using methods like beheading and stoning. The group has been especially fierce in targeting dissenters among its main constituencies, foreign fighters and Sunni Arabs unhappy with the Iraqi and Syrian governments.

A spokeswoman for subcommittee chairman Rep. Ted Poe (R-Texas) told Foreign Policy this week that Rajavi is qualified to comment on the Islamic State because she is a Muslim woman who knows the "prejudices inherent in radical Islamist ideology," and because of her group's association with Iraq, where it was sheltered by then-President Saddam Hussein after being expelled from Iran in the 1970s.

The Obama administration, which revoked the MEK's terrorist designation in 2012 after the group renounced violence and cooperated with the United States' plans for its members in Iraq, did not publicly condemn the invitation to Rajavi. But a State Department official speaking on background echoed the question of whether the House Foreign Affairs Committee truly wanted to hear about the Islamic State, or whether the committee members were simply looking to promote an anti-Iran voice.

"We believe that there are other relevant witnesses who could speak more credibly to the threat posed by ISIL," the official said, using the administration's preferred acronym for the Islamic State group.

Iran is itself fighting the Islamic State, which believes that Shiites, including the ayatollahs who rule in Tehran, are infidels. The U.S. is tacitly cooperating with Iran and its controversial proxies to combat the Islamic State in Shiite-run Iraq.

In her remarks Wednesday, Rajavi urged lawmakers to reject what she called an “artificial dichotomy” between Iran’s government and the Islamic State. According to the MEK leader, Iran’s support of Iraqi Shiite militias and its tolerance of Islamic State beheadings show that both Iran and the militants seek to spread Islamic extremism.

Lawmakers defended the decision to invite Rajavi despite the controversy, and even the irony, of a counterterrorism panel hosting a woman recognized by the U.S. as a former terrorist.

“Whatever the MEK did or is accused of, it was against a terrorist regime,” said Rep. Brad Sherman (D-Calif.), referring to the Iranian government. “Trying to defeat the government of the Islamic Republic of Iran can be branded as terrorism under some circumstances, but most of the time it’s thought of as policy."

Sherman pointed to what MEK advocates consider the group's greatest triumph: its revelation to Congress in 2002 that Iran was running an undeclared uranium enrichment facility in the city of Natanz.

“The MEK has actually been a useful source of information to Congress, unlike an awful lot of the witnesses we have,” Sherman told HuffPost.

That moment has since been eclipsed, however, by revelations that the U.S. intelligence community and the International Atomic Energy were privy to the site before the MEK’s public disclosure, and by a series of other MEK claims that ultimately did not hold up to scrutiny. The most recent MEK allegation, presented in Washington by the group's political arm in early March before a deadline for the nuclear diplomacy with Iran, was debunked once Foreign Policy revealed that the site the MEK identified as a secret Iranian nuclear facility was in fact a production center for identification cards.

Though now welcome guests in the U.S. Capitol, the MEK once led chants of “death to America” and celebrated the seizure of the U.S. embassy in Tehran in 1979. Maryam Rajavi’s husband, Massoud, was then the head of the organization and an ardent critic of Iran's U.S.-backed king, Shah Mohammad Reza Pahlavi. Rajavi viewed himself as the rightful leader of Iran, and throughout the 1970s, the MEK effected a bombing campaign against the shah’s government, assassinating at least six Americans in the process.

When the shah fell, it was the Islamist Ayatollah Ruhollah Khomeini, not Rajavi, who assumed power. Khomeini’s government cracked down on its potential rival, conducting mass executions of MEK members. Rajavi’s group responded with a steady stream of terror attacks against the nascent government, ultimately killing dozens of Iranian parliamentarians as well as the country's president and prime minister.

The MEK eventually moved to a compound in Iraq called Camp Ashraf, seeing Hussein as a friend because he, like the MEK, opposed the ayatollahs. The MEK's legacy in Iraq is a key reason why the U.S. is careful about directly condemning the group today. The U.S. has treated MEK members in Iraq as "non-combatants" and "protected persons," out of concern that Shiite Iran-influenced fighters might target them. In 2012, the Obama administration, alongside the United Nations, the European Union and the Iraqi government, agreed to resettle a number of MEK members at a former U.S. base called Camp Liberty. And since September 2013, senior State Department adviser Jonathan Winer has been responsible for a humanitarian effort to resettle "Iranian persons found to be in need of international protection out of Iraq."

With Iranian influence in Iraq now at new heights, though, the MEK is at greater risk than ever before -- and the need for members to travel outside Iraq for their own safety is especially real, which makes it difficult for the U.S. to continue to speak of them as terrorists or liars.

The risks faced by MEK members based in Iraq have formed the core of the group's powerful, yearslong lobbying campaign on Capitol Hill, according to investigations by The Huffington Post and The Intercept. The campaign has won the dissidents access to lawmakers from around the country, and is thought to have played a key role in the MEK's removal from the terror list. Poe, the chair of the panel that heard Rajavi speak on Wednesday, has received more than $17,000 from MEK supporters since 2009, according to an analysis by LobeLog's Eli Clifton.

Asked Wednesday if he was concerned about Rajavi’s extreme views -- specifically, her overt desire for regime change in Iran -- Sherman responded: “OK, let’s establish a policy in Congress that we don’t have any witnesses with axes to grind and point of view or political agendas. If we establish that policy, I get to sleep till noon every morning. Because there are no witnesses at any hearing that aren’t trying to influence public policy for their own purposes.”