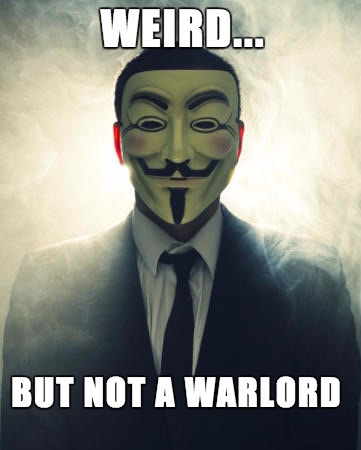 Warlord (definition) -- One who holds domain or control over a physical area, a social situation or the right of passage. Usually applies power in a despotic and petty manner no matter how small the matter. Highly averse to change. Found in both war torn countries and advanced democracies, inside and outside of government. Highest concentration in departments of motor vehicles and inside the Yahoo toolbar.

Welcome back to the continuing series, Warlord Leadership Lessons, your handy how-to guide for advancing practical solutions, in confusing times, to our most vexing social challenges.

Today's installment looks at the U.S. Congress, where warlords, dysfunction and permanent gridlock now rule with impunity. Forget conventional strategies for jolting this Frankenstein monster back to life -- we need to think differently.

Look at it this way. Who could have foreseen something positive happening after the Paris tragedy when someone in one of those creepy Anonymous masks called out ISIS? Yet the very next day, the shadowy hacker network proceeded to shut down 3,500 ISIS twitter accounts. Impressive smack-down. No civilian casualties. Decidedly not a move from the normal playbook. Definitely a step in the right direction.

So what's the right first move to catalyze Congress back to life?

Most mainstream pundits looking at ongoing Congressional dysfunction (measured by low productivity, high bloviation) have concluded that the problem to be fixed is rampant partisanship.

But bickering partisans in Washington D.C.? Hardly a new issue. There were plenty of nasty fights back in the Thomas Jefferson era, even actual duels between major players like Aaron Burr and Treasury Secretary Alexander Hamilton.

A deeper look at the problem, with our special 3-D warlord-spotting lens on, finds what's really gumming up the works.

The real issue messing up the legislative process is that Congress has become a breeding ground for warlordism and petty power struggle, starting with the sprouting of self-important Congressional aides. At last count, Congress is supported by over 20,000 congressional aides who all pretty much all have the ability to stop or slow down anything they want. And they usually do.

Think of it this way. When Thomas Jefferson was the president, he wisely borrowed $3 million to make the Louisiana Purchase and effectively tripled the size of the United States. At the time he had one assistant, a fellow named Meriwether Lewis, his secretary. Jefferson asked Lewis to take 4 years or so, risk his life and find a water passage to the Pacific Ocean, with no frequent flier miles even, so we could beat out the Spanish and the English and lay claim to the land and make Manifest Destiny a topic we had to memorize in 4th grade.

In other words, here's the president of the United States gamely doing his own correspondence and keeping his own Outlook calendar, literally, for four years, and now we have 85 staffers for every single U.S. Senator.

Our warlord systems analysis has thus uncovered the real problem with Congress: Too many nitpickers -- not enough actual deciders. Try being the mayor who wants to do something innovative to create jobs? Feel free to convince 27 different economic development subcommittees that are ruled by Congressional staff warlords that your way is their idea. That's easy compared to homeland security, where 108 committees are working to make us safe. Which is maybe why we should be happy that Anonymous stepped up last week to "dislike" ISIS on Twitter.

So could bringing back "earmarks" -- derided as pork barrel, insider spending just a few years ago -- be the unconventional solution for re-booting Congress? It just might be.

You remember earmarks, don't you? Candidates John McCain, Hillary Clinton and Barack Obama all railed against the practice of having each of 435 Members of Congress "earmark" about $42 million dollars on average to support a needed community project in their district that didn't fit the confines of federal program requirements. Sure there were really dumb projects like the $242 million Alaskan Bridge to Nowhere, but in many communities, earmarks served as the only source of flexible risk capital for local innovation.

Even many earmarks formerly shamed by John McCain and others in the media actually look pretty good, including critical 2009 bee pollination research to understand why honey bee colonies were in massive decline.

Earmarks served another hidden function: they kept 435 Congressional warlords (and their junior warlords, the staffers) in line. They greased the Congressional machine. They were the necessary leverage that the Speaker and bi-partisan Congressional leaders could use to pass key bills and drive compromises when the ideologues on both sides of the aisle duck in their heels.

Yes, it's ugly and unromantic to think about paying $42 million of tribute to each of 435 Congressional warlords to get them to stop being completely dysfunctional. Yet local spending through earmarks served essentially as the "warlord equilibrium" for Congress and it has been way uglier since they went away.

Let's be real: one can never eliminate all the warlord behavior in every system in society. Warlords are part of the natural order, like wasps or weeds or sadly it seems, wackos wearing suicide vests. We just need to make sure that we aren't creating the conditions for more of them to breed. That's the whole point of writing Warlord Leadership Lessons -- to build a dialogue about #ModernWarlords and the best way to put warlord checks and balances in place.